As long-time readers know, I have an affinity for patterns -- not just chart patterns, but market patterns. Like if the last six Mondays are down and Tuesdays are up or Nasdaq has been up for a number of days, I find patterns of note. They are of note, because if they change it means something has changed in the market.

In the last five trading days, the S&P 500 has developed a pattern. It's more like it's playing catch or ping-pong, but look at these closes on the S&P since last Thursday:

That means if we break either end of this range then the pattern of the last week, essentially since the day everyone got so excited over the lower-than-expected consumer price index has changed. Clearly, Thursday is a big test for this.

But more than that, this means since Thursday's close, the market's breadth is up 300 and the S&P is up 2 points. That is pretty much in line. What is not in line is the number of stocks making new highs. (yes, I'm harping on this metric). Last Thursday the New York Stock Exchange had 75 new highs. Wednesday there were 53.

The Nasdaq is no better. Notice the Hi-Lo Indicator has turned south enough that you can see it now. 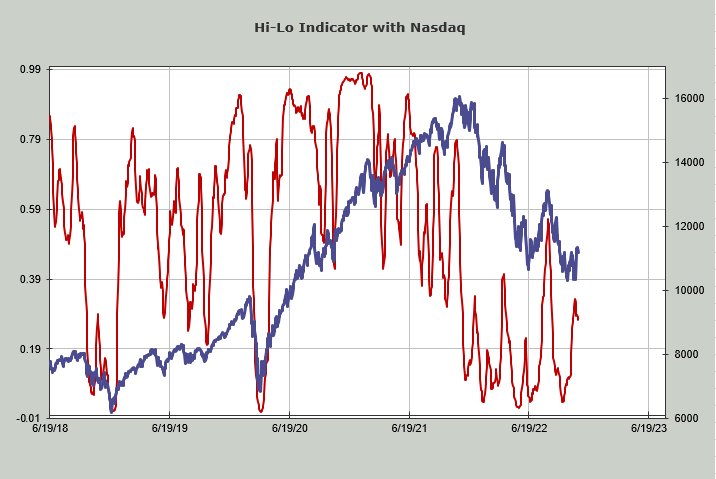 Then there's the Investors Intelligence bulls which are now at 38.6% which is the highest since the August high when they were 45%. The bears are at 32.8%. This is the first time we've had more bulls than bears in two months. 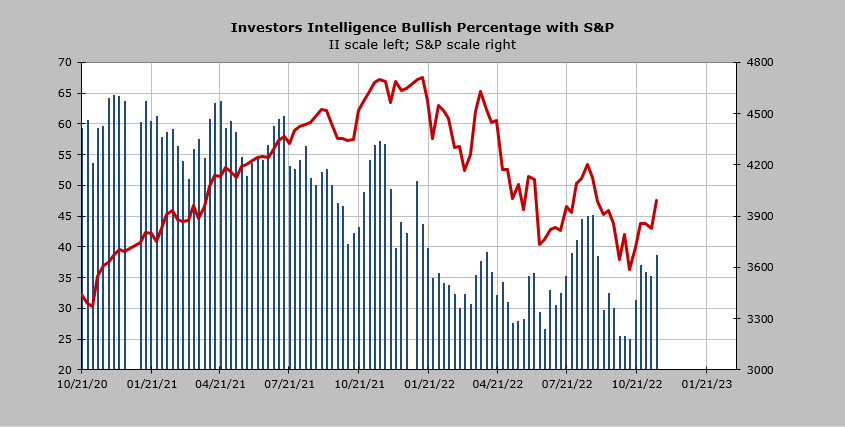 I often discuss the put/call ratio, which I find telling at times (more on that below). But the 21-day moving average of the put/call ratio for exchange-traded funds is worth discussing, because it is now at the lowest level of the year and is fast approaching the lows set in November and December last year. That peak you see (green arrow) on the chart is late September so you can see the change in sentiment rather clearly. 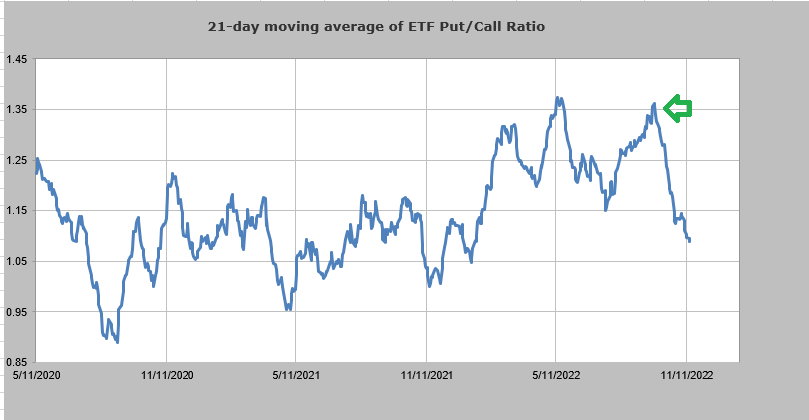 Let me note that the total put/call ratio on Wednesday zoomed up to 1.22, so on a very short term basis there were a good deal of puts being bought. That's good news. The bad news is that at this point a high reading is going to turn this moving average upward and when it heads upward, it is generally not supportive of stocks.

Finally there are bonds. The yield on the 10 Year is coming into support, so I would expect sometime in the next few days we'll see yields lift.