There are many ways of looking at the stock market. Bottom up. Top down. Fundamentally. Technical. Quantitative. By sectors, by industries and individual companies. Many observers look at the popular averages -- the narrow Dow Jones Industrial Average, the S&P 500, the Russell or the Nasdaq 100.

In the daily bar chart of QQQ, below, we can see a weakening pattern evolving from April. Prices declined sharply in May and needed the next two months to move up to a slight new high. The move up in June and July was on shrinking trading volume and the daily On-Balance-Volume (OBV) line made a double top with the prior high at the end of April.

Another selloff occurred in early August, which was not particularly deep and actually short-lived. It took six weeks of prices to retest the July highs but the move up shows the OBV line weakening to a new low. Sellers were more aggressive on this third push to the upside.

The Moving Average Convergence Divergence (MACD) oscillator has been making lower highs from April to July to September. This indicator is again in a take profits sell mode and close to the zero line.

None of these observations make it to the mainstream media coverage of the stock market. If we took a simple wooden ruler and drew uptrends from the late December low we could see a fanning pattern telling us that prices have gone from an uptrend to a sideways trend. Next move would be a downtrend. 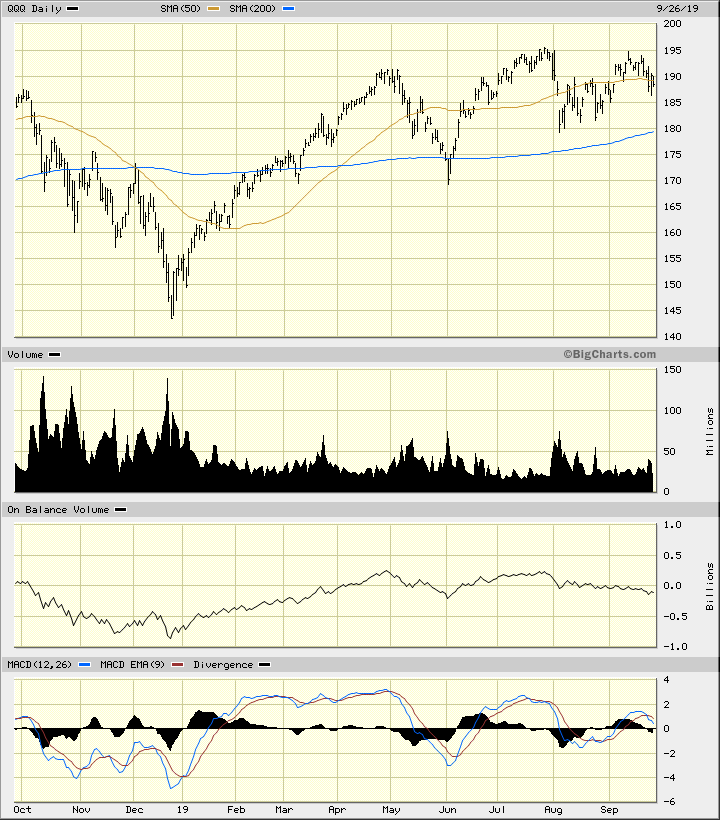 In the weekly bar chart of QQQ, below, we can see a potential shift in the market the past six months. Prices have made three highs above the rising 40-week moving average line.

Trading volume has diminished this year and the weekly OBV line has diverged with lower highs being made. The MACD oscillator has being weakening since early May. 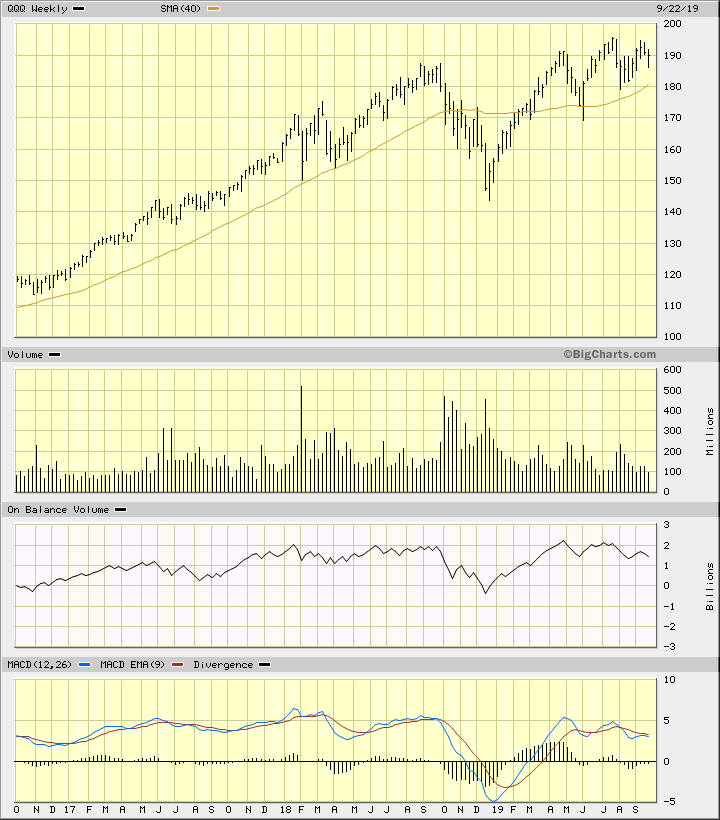 In this weekly Japanese candlestick chart of QQQ, below, we can see that prices have made three doji patterns, telling us that there is a balance between buyers and sellers that the small real bodies define. 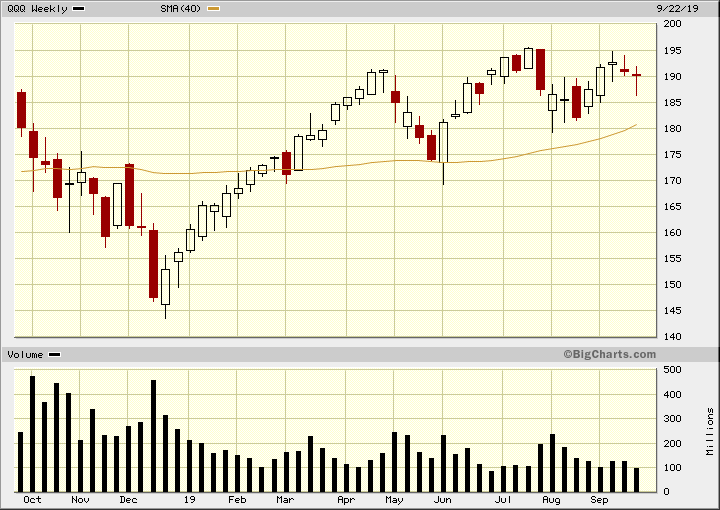 In this Point and Figure chart of QQQ, below, we can see a potential long-term upside price target of $280. However, a trade at $180.53 will be a new low for the move down on this chart and could turn the price target to the downside. 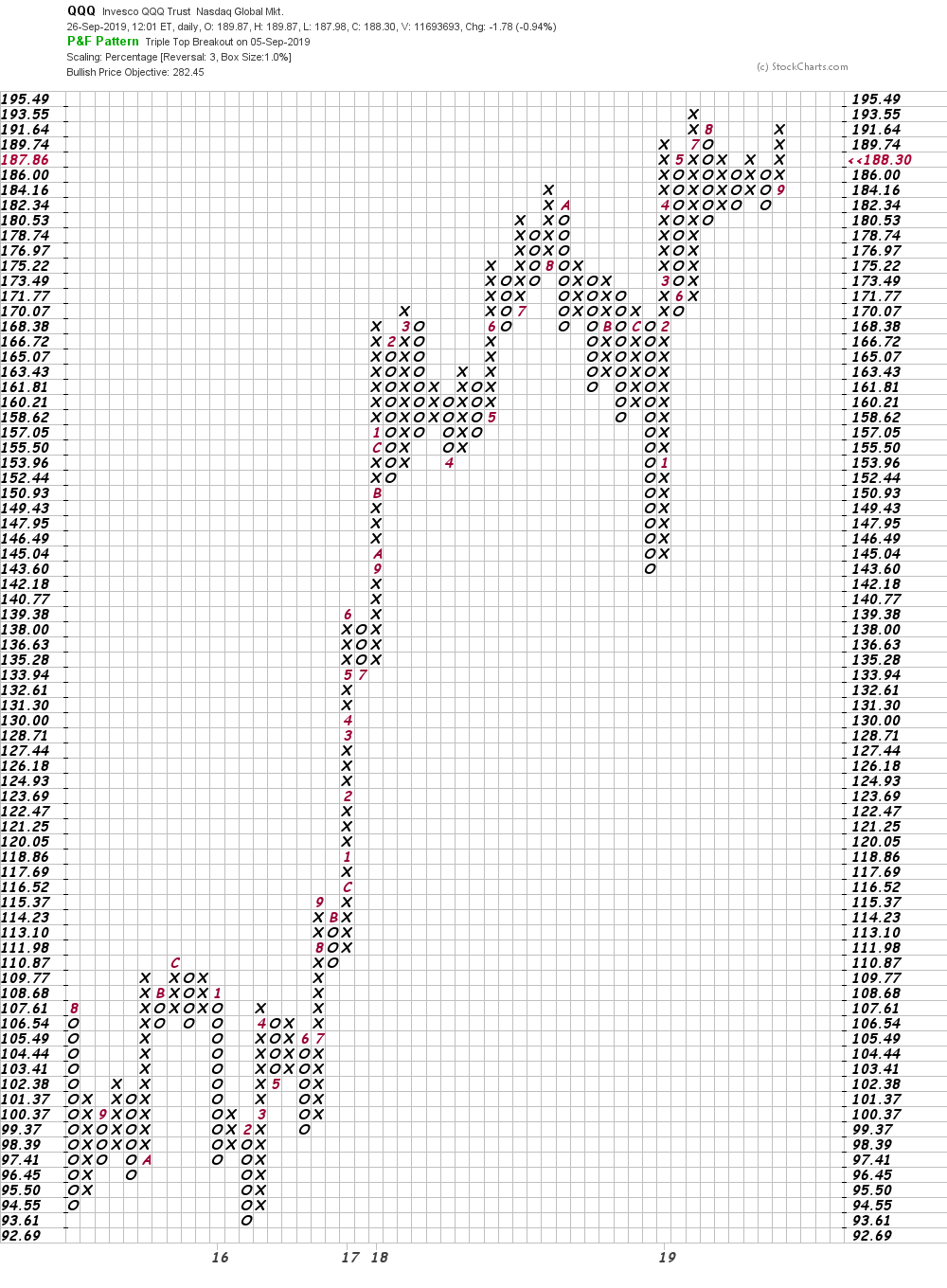 Bottom-line strategy: I am not a perma bear nor a perma bull but the charts of the QQQ suggest a cautious stance heading into October.

Get an email alert each time I write an article for Real Money. Click the "+Follow" next to my byline to this article.
TAGS: ETFs | Indexes | Investing | Stocks | Technical Analysis | Technology