I am often asked the following: If I am looking for a market rally, and everything seems so gloomy, what can make the market rally? Or, the inverse is also asked: If the market seems to me set up for a pullback and it seems like there is nothing but blue sky ahead, what can take the market down?

My answer is almost always the same: I don't know, because if I knew, then everyone else would know and then it would be priced in. Yet, something always seems to come along, some piece of news, that then shoves the market in the direction it ought to go. Oh, OK, not always, but often.

While everyone got somewhat hysterical over the news of a tax hike on corporate gains on Thursday, I would just say that it was just a reason for an overbought market to sell off. If it wasn't this, it would have been something else.

And yet, did you see the statistics? Breadth was negative 720 on the New York Stock Exchange. Let's put that in perspective. Wednesday the S&P gained 38 points and Thursday it lost 38 points. Net breadth for those two days is around positive 1,200. That is not something we experienced even last week or earlier this week. Breadth outperforming is a new twist for the month of April. Let's see if that continues.

I have spent a great deal of time talking about volume. In fact, I believe last week I noted on those rally days that up volume barely got to 50% of the total volume. I thought that was bearish. Well Thursday's decline saw up volume as a percentage of total volume on the New York Stock Exchange at 40%. Now, I grant you that's not great, but remember the S&P was down nearly 1%. So, it's not bad.

The number of stocks making new lows two days ago on the New York Stock Exchange was 44; Thursday it was 14. Nasdaq, where the new lows have been expanding for weeks and where there were 138 on Tuesday, saw 28 new lows on Thursday.

Contracting new lows is a positive, not a negative.

Nasdaq's breadth was flat. Nasdaq's volume was flat. Yes, flat 50-50. Again, this is different than what we saw just one week ago.

Sentiment went from giddy and arrogant in the morning to somewhat concerned in the afternoon. The put/call ratio moved up to .80. It would be great if we can get these put/call ratios moving up, because that would get the moving average lines moving up, something that is missing in the market.

I noted on Monday that it seemed no one was hedged and it still feels somewhat like that considering the moving average lines haven't moved up. The 21-day moving average of the exchange-traded fund put/call ratio is still sitting there at the lows. 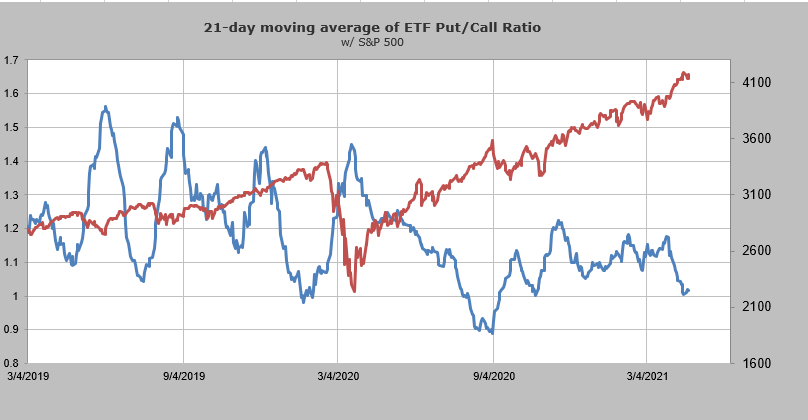 Even the National Association of Active Investment Managers barely budged their exposure this week. So folks are sitting tight. I do expect that will change before this pullback is done. Perhaps we'll see some hedging as we head into the weekend. 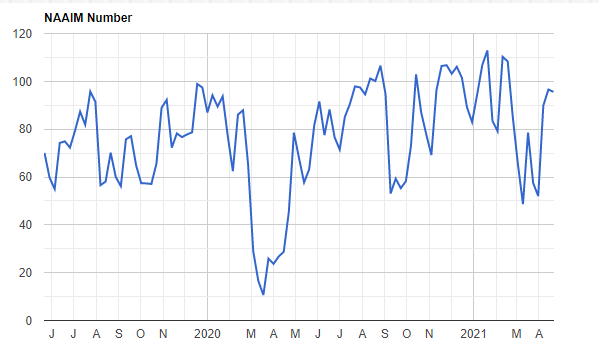