In the last week or so, we've seen some big moves in currencies, namely the dollar. We've seen new lows in bond yields. We've seen skyrocketing gold and silver. And we've seen the equity market move up.

Here's what I did not hear or see: Anyone pointing out there was no lower low in the Dollar Index on Wednesday vs. last week. Yet, right here, on the chart, that's what we see. And the Daily Sentiment Index (DSI) is back at 11. Recall, last Thursday it got to 8, and we saw that rally from 92.50 to 94.

Then there are the bonds. No one seems terribly concerned that the yield on the 10-year broke under .60% two weeks ago (blue line). I have my eye on that level, but I also have my eye on that black downtrend line. That particular downtrend has been in place for nearly seven weeks. It would be something if we crossed it, wouldn't it?

Oh, and the DSI for the bonds got to 83 earlier this week, so clearly so few are in the "rate rally" camp, even if it is short term.

I know gold has gone further than I thought it would, and I still think it goes up longer term, but note that it closed almost near the low of the day on Wednesday. Sentiment here is quite elevated, with a DSI reading of 93.

I had thought the DSI for the Volatility Index might move down more Wednesday, toward single digits, but it stayed at 12.

Will any of this matter to stocks? That remains to be seen, but if I had a gun to my head, I would guess the asset we see a change in first is the dollar. And since the buck has become the narrative du jour, it is possible that stocks might care for a short-term pullback.

I will end by noting that the put/call ratio for exchange-traded funds saw a sharp rise on Tuesday as it climbed to 1.41, which is the highest reading in almost a month. It was also only one of a handful of readings that was over 1.0 in the last several weeks. That has caused the 21-day moving average to tick up a smidgen. For reference, those prior two lows arrived approximately three to four weeks before the market decided to care. 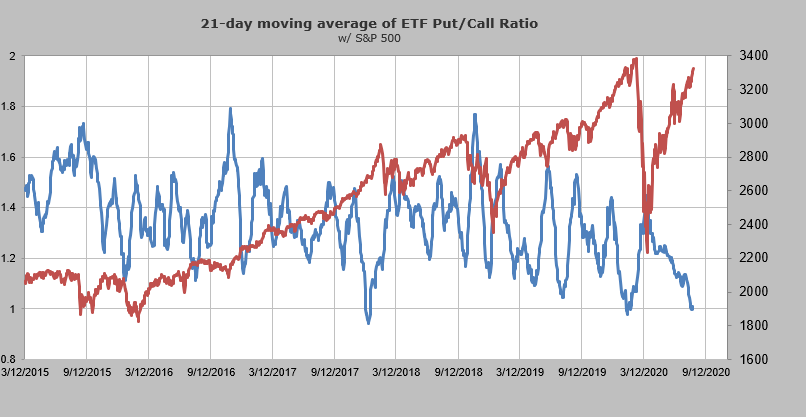 Get an email alert each time I write an article for Real Money. Click the "+Follow" next to my byline to this article.
TAGS: Currencies | Investing | Stocks | Technical Analysis | VIX | Metals & Mining |