I've stopped counting the number of investors disappointed by the lack of progress surrounding cannabis reform at the federal level. Anyone who invested in the U.S. multi-state operators or the AdvisorShares Pure U.S. Cannabis ETF (MSOS) based on President Joe Biden's February 2021 promise to pursue cannabis decriminalization and expungements for people with prior cannabis convictions has both lost money and faith in their elected leaders. But losing faith in politicians isn't exactly a new thing.

Nonetheless, if you look at a chart of MSOS and pull out a magnifying glass, you'll see that it has closed above a 50-day simple moving average (SMA) for two days in a row. I know that doesn't sound like much, but given that it's only closed above the 50-day SMA about 12 days this year, I'm keeping an eye on it (and a small position in it) to see if buyers are ready to re-engage. There's no need to rush into a position, but if the stock can close above $13, we'd finally have the early makings of a bullish pattern.

As I explained when I first told you about this partnership, Groupe Beneteau is a massive player in the recreational boating industry, overseeing 12 brands with a combined 180 different boat models. Suffice it to say that scoring a deal with these guys is potentially transformative for Vision Marine.

I'm scheduled to speak with Alex Mongeon, VMAR's CEO, on Wednesday. If I learn anything new about the company's partnership with Groupe Beneteau, I will share it with you. While neither company has released any firm order numbers, it won't take much to move the bottom line on VMAR's $50 million market cap. 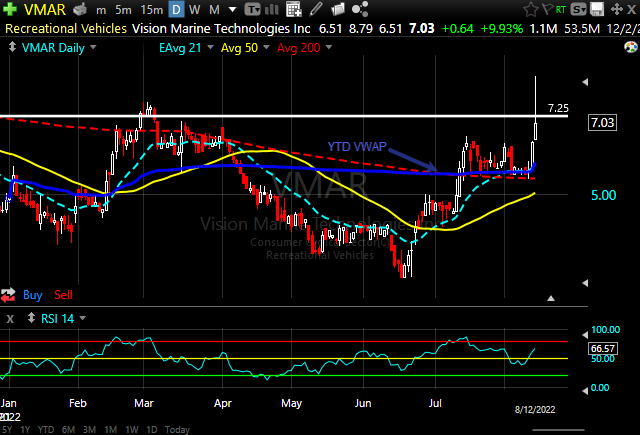 The resistance area I've been watching is $7.25 to $7.75. For whatever reason, the stock caught fire late on Thursday and exploded higher on Friday's open before finally pulling back during the early afternoon. Whether Friday's move was related to squeezing shorts is anyone's guess, but the bottom line is the stock is in play and worth keeping an eye on.

Short-term traders can consider buying a dip against the rising 8-day exponential moving average, while position traders who are not already long the stock should be looking for a close above $7.75 to $8 before taking action.

Get an email alert each time I write an article for Real Money. Click the "+Follow" next to my byline to this article.
TAGS: Investing | Micro cap stocks | ETFs | Stocks | Technical Analysis | Marijuana | Technology | Manufacturing | Real Money | Consumer Discretionary | Cannabis