"This company is a great company. As shares come down, I'd accumulate more," Jim Cramer told a caller asking about Zebra Technologies Corp. (ZBRA) during the Lightning Round segment of Mad Money Friday night.

Let's check out the charts and technical indicators of this company that manufactures and sells marking, tracking and computer printing technologies.

In the daily bar chart of ZBRA, below, we can see that the shares have been pressured this month. The chart pattern looks like a bear flag pattern where there is a sharp move lower (the pole) followed by a quiet drift higher (the flag) before another sharp move lower happens. Prices are trading below the declining 50-day moving average line but still above the flat 200-day moving average line.

The On-Balance-Volume (OBV) line looks like it is moving lower this month after a less-than-exciting rise from early April to early September. The Moving Average Convergence Divergence (MACD) oscillator crossed below the zero line earlier this month for an outright sell signal.

In the weekly bar chart of ZBRA, below, we can see some sell signals. Prices are declining and we could see a test of the flat 40-week moving average line.
The weekly OBV line shows a peak back in April 2019 and a lower peak in December 2019 and maybe a still lower peak being made now. A pattern of long-term liquidation.
The MACD oscillator has crossed to the downside for a longer-term take profits sell signal.

In this daily Point and Figure chart of ZBRA, below, we can see that the software is projecting the $200 area as a possible downside price target. 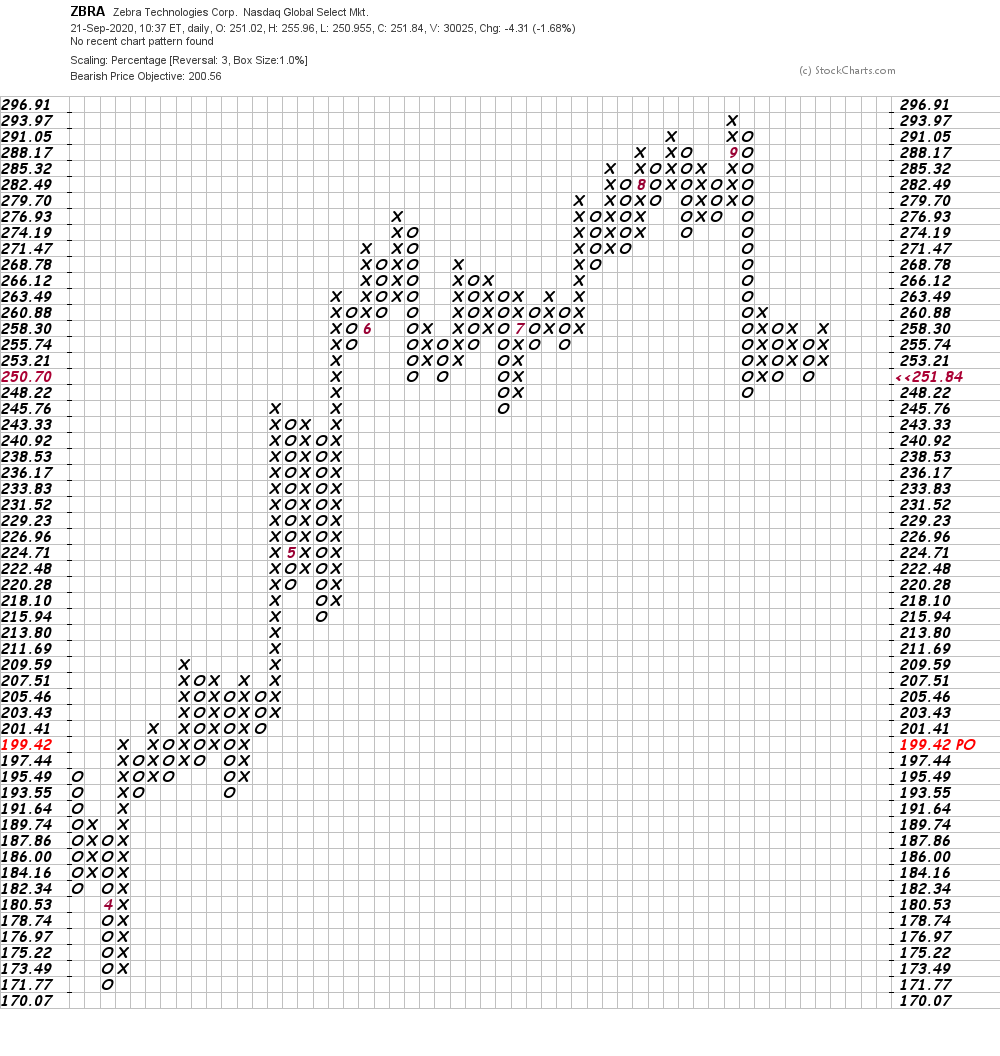 Bottom-line strategy: ZBRA may be a fine company but the stock price is another story. The shares look vulnerable to a significant decline. Avoid the long side for now and let's take a look again in the $200 area closer to year-end.
Get an email alert each time I write an article for Real Money. Click the "+Follow" next to my byline to this article.
TAGS: Investing | Stocks | Technical Analysis | Technology | Technology Hardware & Equipment | Mad Money