The real story Samsung (SSNLF) stock's trajectory is the emergence of 5G, not any issues with memory that had become built into estimates over recent months.

Shares of the semiconductor and smartphone stalwart sank in the South Korean markets after forecasting disappointing results for the first quarter of 2019, particularly amidst the erosion of memory pricing in recent months.

However, analysts are noting that the memory slowdown was largely expected, as reports from both major chipmakers so far in 2019 have largely set that as the standard. In fact, many analysts took an optimistic view that an inflection point may be near for the memory market given the recognition of the issue and actions among the world's largest memory chipmakers.

"We believe memory earnings were largely in-line with our expectations as the ASP decline and shipment weakness was well expected," Deutsche Bank analyst Seung Hoon Han said. "With the memory companies having large inventory from customers delaying procurement, we believe signs of customers starting to rebuild inventory may be the first inflection point for recovery."

Likewise, Apple's (AAPL) reports on the smartphone cycle and Samsung's own pre-forecasts couched the share reaction to dimmed forecasts for phone sales.

5G Is the Real Forecast

Instead, analysts pointed to 5G as the real catalyst for share growth at Samsung in the coming year.

"One area of focus would be the impact from 5G launches, progress of 5G subscribers, and 5G smartphone sales outlook," Seung commented. "Samsung may be well positioned with 5G line-ups versus competitors as new iPhones in the second half of 2019 may not have a 5G model."

The competitive advantage of Samsung as Apple hits delays is a key thesis for those selecting the stock.

Reports have come through as of late that delays at Intel (INTC) , reminiscent of its issues with its 10nm chips that gave away market share to Advanced Micro Devices (AMD) , could stall Apple's attempts to compete with Samsung in the 5G revolution.

According to Fast Company, the launch of a 5G-enabled phone is slated to be ready by September 2020 at the earliest, but production delays could extend that deadline. Considering the precedent with production problems at Intel, the earlier deadline may indeed be optimistic.

Apple is backed into a corner with Intel as well, as a public spat with the 5G-capable Qualcomm (QCOM) over patents prevents it from reverting to a more logical partner.

Meanwhile, Samsung is already supplying 5G-enabled phones in the South Korean market that already boasts capable infrastructure. Digital trends even proposes that the company's Galaxy S10 5G phone could be headed to United States-based Verizon (VZ) customers as early as May 16.

Any prolonged delays would likely leave Samsung able to gobble up market share with its high-powered offerings for a year or more.

To be sure, it's not simply a two-horse race in 5G as Chinese competitors like Huawei, Xiaomi (XIACF) , and ZTE (ZTCOY) attempt to assail the traditional U.S. and Korean leaders. 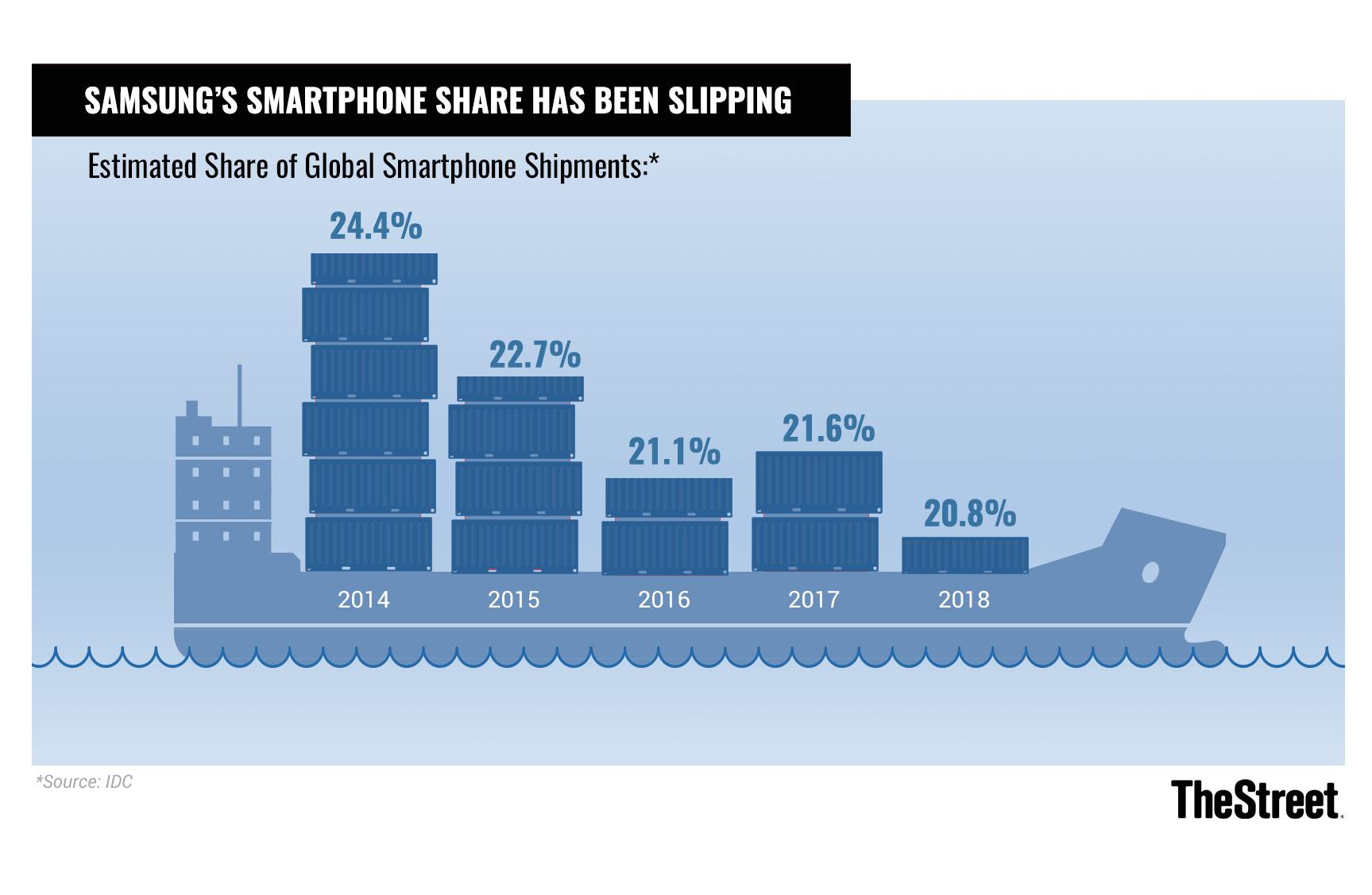 Beyond their popularity in the domestic market, Chinese smartphone manufacturers have made significant strides in the world's second most populous consumer market in India.

According to Statista, Xiaomi is by far the most popular phone manufacturer in the market as its lower cost options compared to Apple and Samsung makes it an attractive purchase.

Saturation in emerging markets like India and domination of a massive market like China pose significant threats to the currently crowned companies. The stickiness of smartphone preferences adds to the issue as each market is projected to eclipse the U.S. in the long term.

Still, while the U.S. remains the honeypot for smartphone and chipmakers and Chinese conglomerates remain encumbered by trade barriers and security concerns, 5G may allow Samsung to cash in essentially unchallenged for quite some time.

In the minds of many, this should help mitigate the memory concerns that are providing a short-term overhang.

Get an email alert each time I write an article for Real Money. Click the "+Follow" next to my byline to this article.
TAGS: Earnings | Investing | Stocks | Semiconductors & Semiconductor Equipment | Software & Services | Technology | Technology Hardware & Equipment | Telecommunications | Analyst Actions | Stock of the Day