Yes, the road ahead looks dangerous. The road behind? How did Thursday's selloff feel? Not so hot for most readers managing net long portfolios is my guess, which is probably most readers. Not truly awful, though. I don't smell panic in the streets. This is not the test, though. Not yet, anyway. Oh, we who choose this life without safety nets beyond the ones we create for ourselves are out there. Still.

The sun is blazing hot. The sand is deep, kind of tough to walk on. Our canteens have run dry. Forward progress is certainly far more difficult than it seemed ever so recently. Outside? Still what most refer to as night. Dark, and will be for a few more hours. The man in the blackened window (handsome fellow) is quieter than usual. Lost in thought. Maybe he'll contribute as we proceed.

Equities traded lower on Thursday quite broadly. It seemed. The pressure has been placed most harshly upon mega-cap tech,with the destructive results most evident across the indices where those types of issues carry the most weight. The Nasdaq Composite, the Nasdaq 100 and even the S&P 500 all created gaps in between their lows on Wednesday and their highs on Thursday as markets reacted negatively to Federal Reserve Chairman Jerome Powell's press conference. Not only has this gap been created, but for both the Nasdaq Composite and the Nasdaq 100 the once-again surrendered 50-day simple moving average (SMA) slips right through that opening. Check this out. 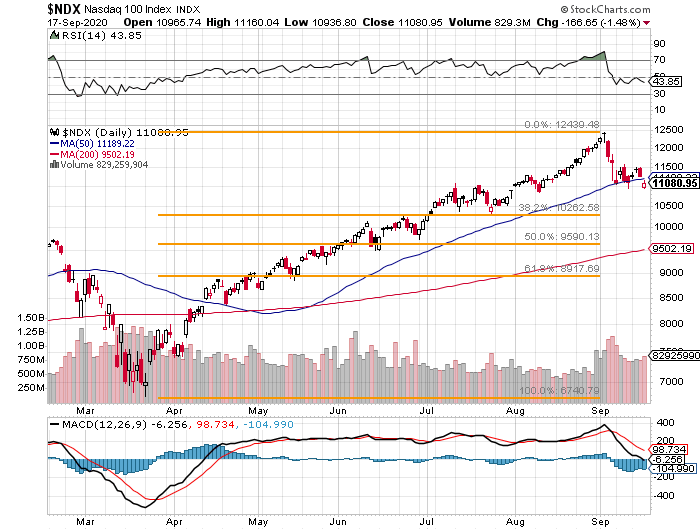 Does this 50-day line now become resistance? Today (Friday) will tell us a lot. FYI, the S&P 500 regained the 50-day SMA over the final half-hour of Thursday's regular session. Might that be significant? It will be if cyclicals drag growth stocks back above those lines of their own as we approach this weekend.

Beware that among those high-fliers that led us here, Alphabet (GOOGL) , Amazon (AMZN) , Netflix (NFLX) , Facebook (FB) and Microsoft (MSFT) all now find themselves below that technically important line in the sand. Also among those names that roared this past summer, Tesla TSLA and Nvidia NVDA appear to be in much better shape in regards to such support, while Apple AAPL, still north of the 50-day line, currently finds itself in an epic battle just to hold on there.

It's Not the Fed

Powell is an easy scapegoat here, and an unfair target in my opinion. The Fed has been overtly accommodative. The truth, the real truth, could be as simple as a general realization that a return to a life more normal might not be around the corner, that comfort in human interaction is slowing economic progress in service industries. Perhaps a deep and truly profound realization now impacts decision making that members of Congress, a month and a half a head of a national election, has put their own interests ahead of those of the public, a public now without the level of fiscal support that had been provided at first.

The protections afforded small business employees by the PPP (Paycheck Protection Program) expire on Sept. 30. What then? Retail Sales are already slowing. Initial Jobless Claims remain stubbornly elevated. Continuing Claims and those filing for PUA (Pandemic Unemployment Assistance) have been in decline, but that decline has been slow and will change direction in two weeks with no congressional help.

Maybe Congress (and I hate everyone, so I blame both sides) has not noticed the 1.06 million mortgage holders now more than 30 days past due on their payments that have not sought out some kind of forbearance. According to Black Knight Inc., roughly 680,000 of these homeowners have federally guaranteed mortgages, qualifying them for such forbearance under the law. These folks need to reach out to their lenders and they need to be educated on how to reach out.

Think losing a job slows down local economies? What do you think unnecessarily increasing homelessness will do? Even those who have sought help in March will see their forbearance periods end in October without asking for a six-month extension. This is the problem nobody is talking about.

Heck, maybe there was also an aspect to this recent pressure/semi-rotation that was just a squaring of portfolio positions ahead of Friday's "quadruple witching" expirations event. Trading volumes will be artificially high on Friday. That's a fact. Put/Call ratios relative to both indices and single equities have been elevated (especially for the indices). Oh, and if that's the case, in about a week and a half investors will be up against a quarterly pension fund rebalancing that could be a real doozy. In other words, keep your helmets on. Oh, and because you asked (no, you really didn't), Snowflake (SNOW) gave up 10.4% on Thursday, but JFrog (FROG) really traded sideways for most of the session.

I find this interesting: The raw data from Thursday's trading session was negative in nature, but not as negative as one might expect if just doing chart work without looking at the underlying numbers.

We'll take a look at the Nasdaq Market Site first, as those indices were hit the hardest. Uptown, losers beat winners, but it was split like 1.9 to 1.4. Not a rout. Declining volume beat advancing volume, but that was rather close as well, a rough 5 to 4. Trading volume for the day across Nasdaq-listed names increased slightly from Wednesday but has been stuck at the same level for seven straight days, three of which were up days.

We'll hop on the 2 train (masked and socially distant) and head down to Wall Street now. At the New York Stock Exchange, losers also beat winners, a little more decisively, though, at 1.8 to 1.1. Declining volume beat advancing volume, but it was even tighter here than it was uptown, at 1.1 to 1.0. Guess what? Trading volume at the NYSE decreased by almost 7%. Is that important? It could mean that interest in selling equities is waning. Before we go out and buy party hats, though, don't forget the mention above that some positions may have been adjusted going into "quadruple witch."

Away from equities, the dollar index has worked its way back toward the lows of the week. Treasury yields have moved around a little, but not what you might expect in a week where the Fed and Bank of England both held policy meetings while leadership changed hands in Japan.

The thing that did move this week, quite significantly, was crude. West Texas Intermediate (WTI) crude traded below $37 a barrel on Monday and above $41 here on Friday morning. What gives? OPEC+, that's what. The Joint Ministerial Committee of OPEC Plus held its production meeting on Thursday. The changes were made to pare down production cuts that were agreed to in August, but the tone was different. The group appears set to dole out financially punitive action for nations that fail to comply with set quotas. The group also implied that further actions may be necessary as Covid-19 spreads.

Charts of the Day: 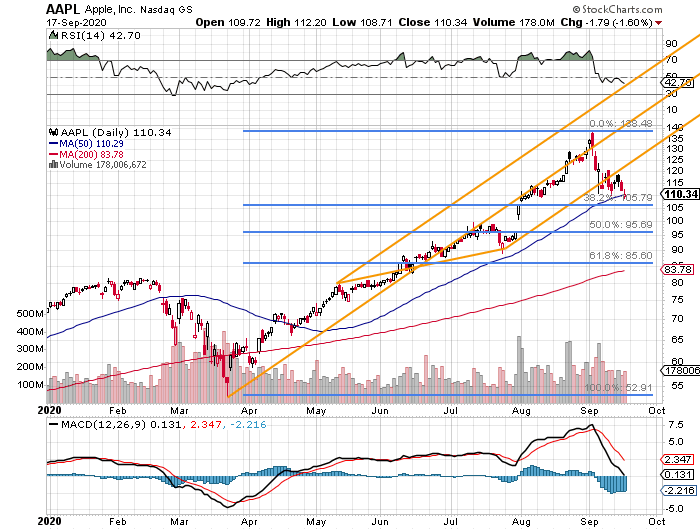 OK, we see that Apple (AAPL) has lost the Pitchfork, quite decisively. The shares have hung on to the 50-day SMA at $110, however. Do I add here? Not necessarily. I am far more interested in adding at the Fibonacci support level of $105 if the market gives me that. Otherwise, I hold Apple, which is a holding of Jim Cramer's Action Alerts PLUS charitable trust. 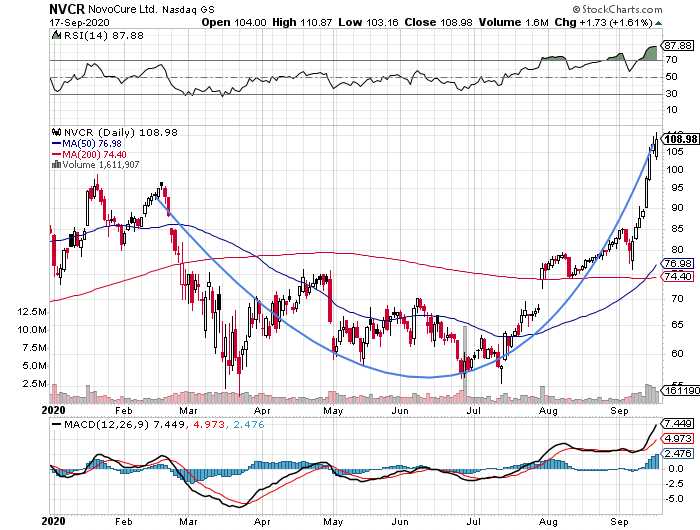 Are there any names breaking out in this environment? You bet your tail there are. Check out NovoCure Limited (NVCR) . No, I'm not in it, just noticed this doing my chart work Thursday night (as the Mets staged another terrific comeback against the Phillies; sorry, Jim) and was simply blown away once I zoomed out to include the entire year. This breakout completes a cup pattern that took seven months to build. The pivot, if there will be no handle added, was surpassed at the $96 level. You already have a 15% gain from there. That ship has sailed.

What now? Several insiders have made recent sales and the shares kept right on moving higher. My thought is that now a handle does form, and there will be a new, much tougher pivot to crack at $110. I am more inclined to short a few shares here on Friday morning just for sport than I am to buy any. If it is just for sport, we are talking position size too small to ruin my weekend if I do get smacked around, just FYI.

At the time of publication, Guilfoyle was long AMZN, MSFT, TSLA, NVDA and AAPL equity.

Get an email alert each time I write an article for Real Money. Click the "+Follow" next to my byline to this article.
TAGS: Indexes | Investing | Oil | Politics | Stocks | Consumer | Healthcare | Life Sciences | Technology | Technology Hardware & Equipment | Real Money