I prefer a little relaxation into my three-day weekend, but never too relaxed not to study some future setups.

Last year wasn't particularly kind to every stock. There were a few names that suffered serious hits to their market cap, but two weeks into 2020, some are turning around for the better.

Here are five names that are happy to put 2019 into the rearview mirror as we head into 2020. They are also five weekly charts that appear to have strong potential for continued upside in Q1 even after a strong start to the year.

A three-day weekend gives folks plenty of time to study these names plus find their own, but with it being a long weekend after a strong market run, I'm inclined to do more watching today than doing. 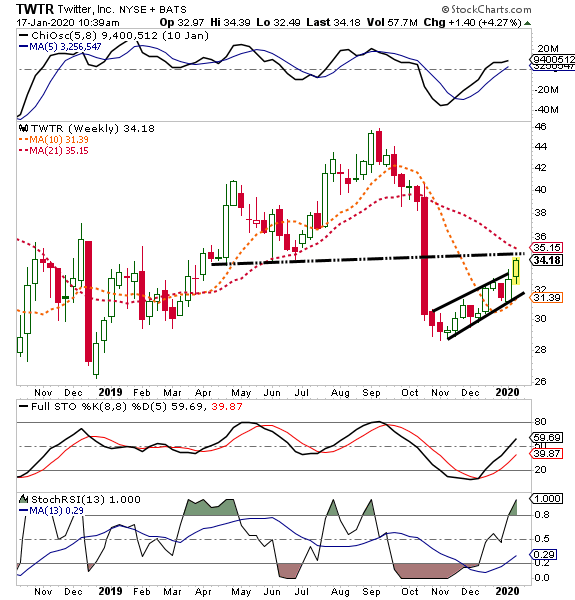 OK, maybe not everyone's favorite, but definitely a popular one for traders.

After a 25% decline in October 2019, Twitter has begun to work its way higher. Despite the 17% move from the lows, Twitter is nowhere near being overbought. The shares marched higher in a channel, which on a break below $31 would be classified as a bearish flag; however, they have moved higher rather than lower out of that channel.

Twitter appears to have a date with $35. That area appears to be a major tipping point. If bulls can push through, then look for $40. If they fail, then anticipate a return to $32. 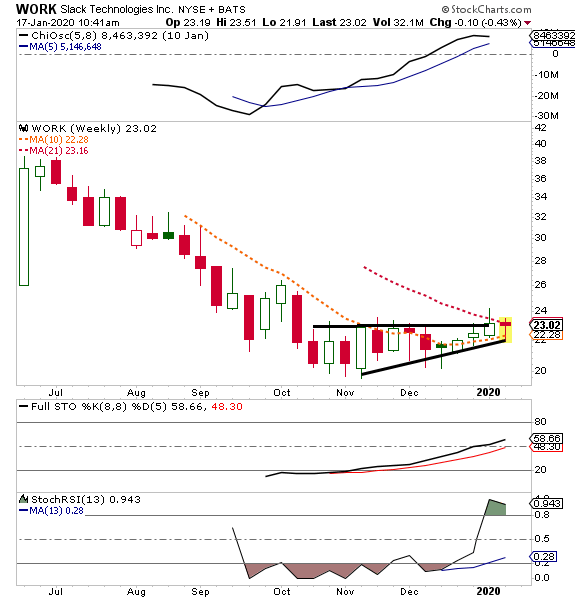 Another communication name, but this one on the work side competing with Atlassian (TEAM) and Microsoft (MSFT) Teams. Slack is one of those names we see mentioned as a cautionary tale of buying recent IPOs.

With the shares nearly cut in half from post-IPOs highs, that "stay away" tune may change in 2020. The stock isn't much off the lows, but a close above $23.20 this week tilts the odds in favor of the next 10% being higher against 5% lower.

The major support level is $22, and I wouldn't want to be long the stock under that area, but with a rising Full Stochastics and strong StochRSI, Slack doesn't appear to be slacking off in 2020. 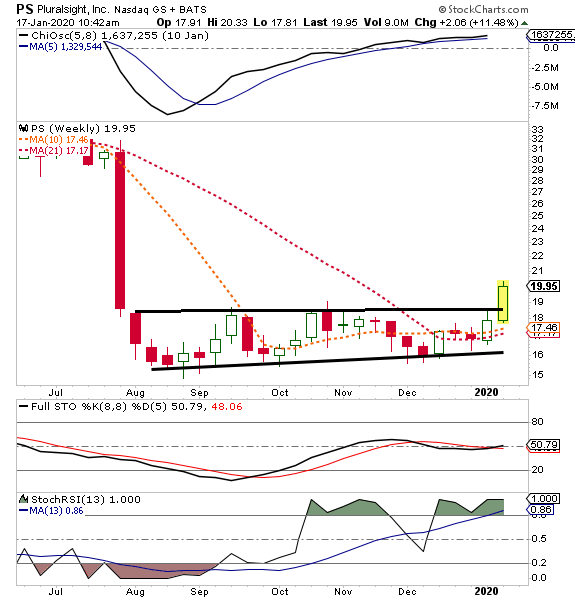 The stock is already up 17% year-to-date. That doesn't make it a bit of a chase, but we're only now seeing a bullish crossover in the Full Stochastics. There's a slight concern we aren't seeing a new high there, but volume and trend are strong.

The new floor for the stock sits in the $18.50 to $19 range, so bulls won't want to see that broken. The stock did get a Jan. 8 upgrade as well. I'd prefer to see a week or two of consolidation after the big move, but this is one to keep an eye on. 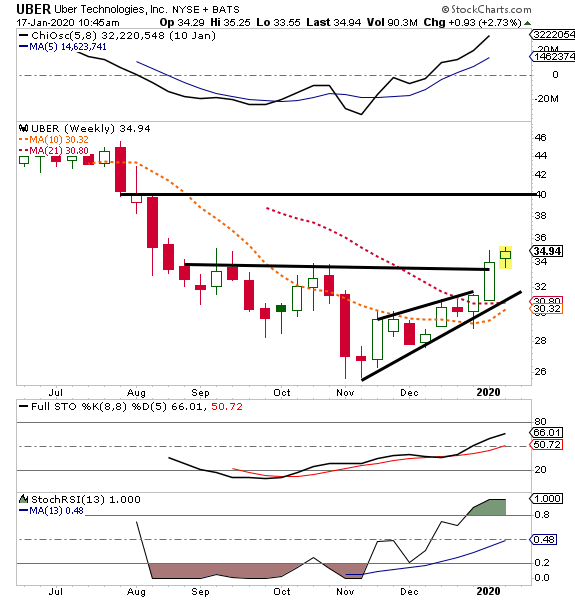 Uber's turnaround started a bit earlier than most of this list. The stock has steadily built off the November lows with secondary indicators flashing bullish divergences in volume, moment, and trend. It's about time price catches up.

Of the five names here, PS sits near the top of the list, if not at the top. I'm looking for a return to $40 before summer rolls around.

If the stock closes below $32, it will be a big warning sign, and anything under the 10-week simple moving average (SMA) is a red flag. That's where I would position a stop. 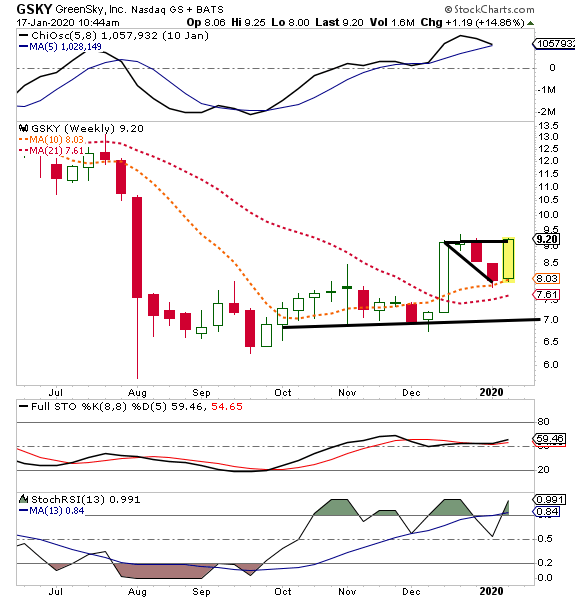 When this name roared higher in December, I thought we finally had our breakout. Turns out bulls needed three weeks to digest the move. Now, we are challenging those highs again, but with only half the extension of the last move.

This puts buyers in a better position.

The 10-week SMA appears to be setting itself as a key watch level. A retracement to that area warrants consideration for a buy with a tight stop. Although volume is a bit weaker than I prefer, trend and momentum indicators are lining up with price and confirming the bullish setup.

After a 15% move this week, I'd watch for consolidation over the next two weeks, then another big push higher. This sets up as a play to scale into if it fits your profile rather than a lump sum like Twitter or Uber.

Anything under $8 kills the bullish setup, but that's a long way down so position size accordingly.

Get an email alert each time I write an article for Real Money. Click the "+Follow" next to my byline to this article.
TAGS: Investing | Markets | Stocks | Technical Analysis | Trading | Technology | U.S. Equity

Better Batten Down the Hatches to Weather the Market Storm

The market ended up suffering some very classic corrective action on Monday, and now's no time to buy.

With the VIX backwards, here's how to play the VXX.