After Monday's historic decline in equities Jim Cramer here on Tuesday began combing through the 30 stocks in the Dow Jones Industrial Average (DJIA) to find if there were any names to buy. In the first installment of his three-part look at those stocks, Cramer said would be buying 3M Co. (MMM) under normal conditions, but with the company's weakened balance sheet and environmental liabilities he couldn't recommend it.

Let's check out the charts of MMM.

In this daily bar chart of MMM, below, we can see that prices have been pressured since April starting with a gap to the downside. Trading volume has been heavy during the decline and increased even further since December as investors voted with their feet. The daily On-Balance-Volume (OBV) line has also been weak/bearish since April and tells us that sellers of MMM have been more aggressive. The Moving Average Convergence Divergence (MACD) oscillator is bearish now and has been for much of the past year.

In this weekly bar chart of MMM, below, we can see that prices have nearly been cut in half since late 2017. A decline this long tells chart watchers that the company has some structural problems and a selloff is not just a pullback to buy. The 40-week moving average line has been bearish since early 2018 and the weekly OBV line, oddly enough has been constructive for most of the last three years. The MACD oscillator has been bearish since April 2018.

In this Point and Figure chart of MMM, below, we can see that the software is projecting a deeper decline with a possible $130 price target. I am not concerned whether MMM actually reaches $130, but rather that MMM will need to build a new base pattern before we can warm up to it again. 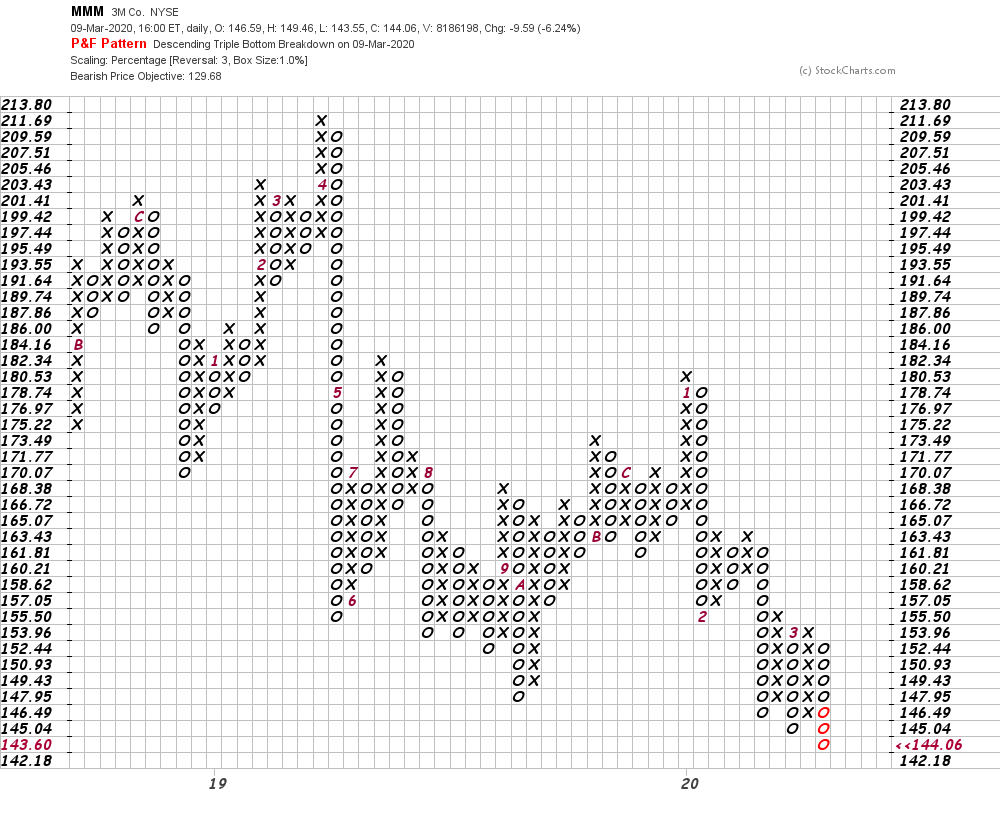 Bottom line strategy: I have seen too many big declines in stocks since the 1973-1974 bear market. Typically, big declines require a new and lengthy base pattern before the coast is clear again. Avoid MMM.

Are You Going to Just Sit There and Stare?

Or are you going to play some of these stocks at great prices?