For his second Executive Decision segment of "Mad Money" Wednesday,  Jim Cramer spoke with Mike Roman, chairman and CEO of 3M Co. (MMM) , the industrial and technology giant with shares that are up nearly 8% over the last three months.

Roman said 3M is seeing strong demand across the board for its products and has a lot of momentum going into the second half of the year. His company continues to ramp up production of N95 masks and it already has delivered billions around the globe plus many other pieces of protective equipment to fight Covid-19.

Roman said in that healthcare 3M is beginning to see an increase in elective procedures that have largely been sidelined by the pandemic. It also is seeing an uptick in the automotive segment, both in the U.S. and in China.

The last time we visited the charts of MMM was March 10, before the pandemic low in mid-March, and we wrote at that time, "I have seen too many big declines in stocks since the 1973-1974 bear market. Typically, big declines require a new and lengthy base pattern before the coast is clear again. Avoid MMM."

Let's pay a visit to the charts and indicators of MMM again.

In this updated bar chart of MMM, below, we can see that prices are above their late March low but they largely have traded in a wide sideways pattern as anticipated. MMM now is trading above the rising 50-day moving average line and above the bottoming 200-day moving average line. Trading volume has been roughly diminishing since the torrid pace of March. The On-Balance-Volume (OBV) line has been choppy all year but is starting to show some bullish promise since early July. The Moving Average Convergence Divergence (MACD) oscillator has been bouncing off the zero line since May. Let's hope this indicator can turn higher in the weeks ahead.

In this weekly bar chart of MMM, below, we can see that prices have been in a downtrend since early 2018. Prices have rallied above the 40-week moving average line, which is now bottoming. The weekly OBV line shows a move higher from March and looks more constructive than the daily chart. The MACD oscillator in this time frame is just crossing the zero line to the upside this month -- an outright go long signal.

In this Point and Figure chart of MMM, below, we used daily price data. Here the chart is projecting a potential upside price target of around $200. 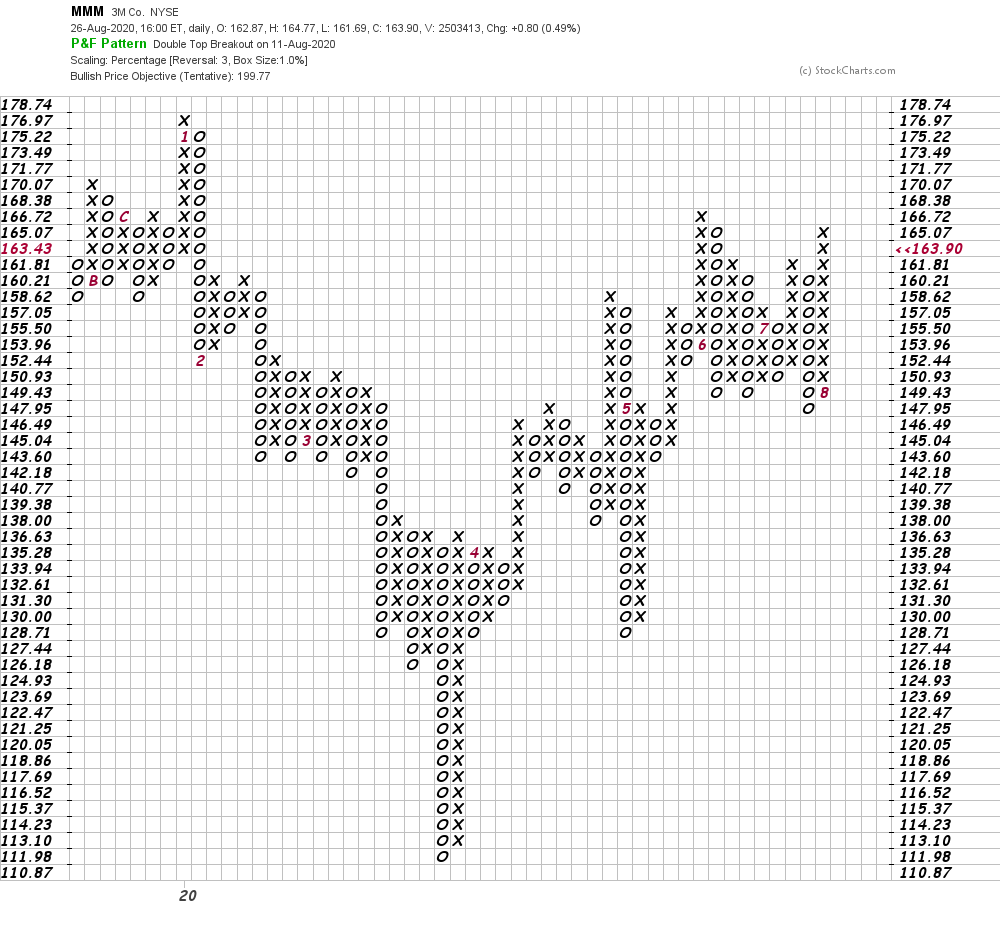 Bottom line strategy: It has taken a while but it looks like MMM has ended its decline from 2018 and is now poised for a rally. Traders could go long MMM at current levels, risking a close below $155 for now. The $200 area is our price objective for now.
Get an email alert each time I write an article for Real Money. Click the "+Follow" next to my byline to this article.
TAGS: Investing | Stocks | Technical Analysis | Automobile Components | Consumer | Health Care Equipment & Services | Healthcare | Household Products | Conglomerates | Industrial Goods | Manufacturing | Mad Money | Executive Interview | Real Money