Three things hit me at the end of Monday's trading session.

First, traders continue to be surprised when a Fed member says they believe the fed funds rate should remain elevated for a sustained period. Atlanta Fed President Raphael Bostic told the Atlanta Rotary Club on Monday, "I am not a pivot guy. I think we should pause and hold there and let the policy work." While Bostic is a nonvoting member of the Federal Open Market Committee (FOMC) this year, investors viewed his comments as a reason to sell stocks.

Investors grew so accustomed to zero or near-zero percent interest rates over the past 12 years that they refuse to accept that rates aren't headed back under 1% or 2% anytime soon. I am a trader, not an academic. However, I believe we'll look back on the 2008-to-2021 period in 10 or 20 years and, I hope, realize how silly it was to keep rates at such depressed levels.

The second thing that hit me at Monday's close is that investors either are ignoring the likelihood that companies will give downbeat guidance (weaker margins, lower revenue and negative profit growth) in their forthcoming earnings calls or they believe the economy is doing fantastic. I'm not a short seller, but until I hear from a few companies during the early days of the coming earnings season, my baseline assumption is that February will be bumpy and sloppy. While the economy is not in the gutter, there's no question that inflation, especially wage inflation, has impacted and will continue to impact the bottom line.

The third thought, and this is more of a reminder than anything else, is that folks in the media and on CNBC always will find a way to explain away a session's price action. Did I expect Monday's rally to fizzle the way it did? No. But am I surprised by how tepid buyers are? Absolutely not; we're in a bear market, after all.

There's nothing easy about trading this or any market. If you're going to try and navigate the market's gyrations, you need a way to tip the scales in your favor and determine if buyers or sellers are in control. One of the easier ways I know of to determine who is in control is to look at an instrument's volume-weighted average price (VWAP). 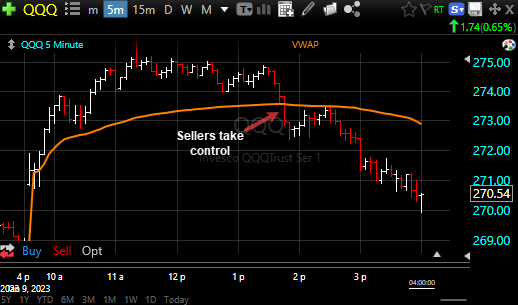 While there's nothing magical about a VWAP, it's clear on the chart above where buyers lost control and sellers pounced. The fact that the Invesco QQQ Trust (QQQ) couldn't push through $275 for nearly three hours was undoubtedly an indication of stalling demand. But if you were waiting for a change in control before stepping to the sidelines, the violation of VWAP shortly before 2 pm was your clue.

Get an email alert each time I write an article for Real Money. Click the "+Follow" next to my byline to this article.
TAGS: Earnings | Economy | ETFs | Federal Reserve | Index Funds | Interest Rates | Investing | Stocks | Trading | Real Money