Everything between now and Wednesday's Federal Open Market Committee news conference is a crapshoot, so you're right if you feel like we're killing time until we hear from Federal Reserve Chairman Jerome Powell.

While stocks and bonds lost ground on Monday in the face of a rising dollar and yields, I don't read much into it because price action between now and midday Wednesday is a dice roll.

Speaking of bonds, the iShares 20+ Year Treasury Bond ETF (TLT) pulled back by more than $2 before catching a late-day bid as it dipped beneath its volume-weighted average price (VWAP) anchored to the Oct. 24 swing low. As I noted in my Oct. 24 article, I plan to add to my TLT position on a dip toward $88.50-$90, and I've still got the same resistance line drawn on my chart around $98.25-$98.75. The 21-day exponential moving average (EMA) also sits within that 50-cent resistance zone.

On the earnings front, aside from Uber Technologies (UBER) , which is up in premarket trading after reporting its third-quarter results here on Tuesday morning, I've got my eye on Advanced Micro Devices (AMD) , which reports after the close. I've got two areas marked on my AMD chart -- significant resistance at $73 and support around $50 (with stronger support at around $34). While I can't imagine AMD screwing up badly enough to test $34, a pop toward $73 or a drop toward $50 seems somewhat possible.

Enphase Energy (ENPH) and SolarEdge Technologies (SEDG) are two other stocks on my watchlist. Enphase reported earnings on Oct. 25 and beat top- and bottom-line estimates. As you can see on the chart below, the stock has spent the past three months consolidating its massive late-July rally. If the Fed says something to ignite the equity market, I expect ENPH to emerge as a strong leader immediately. 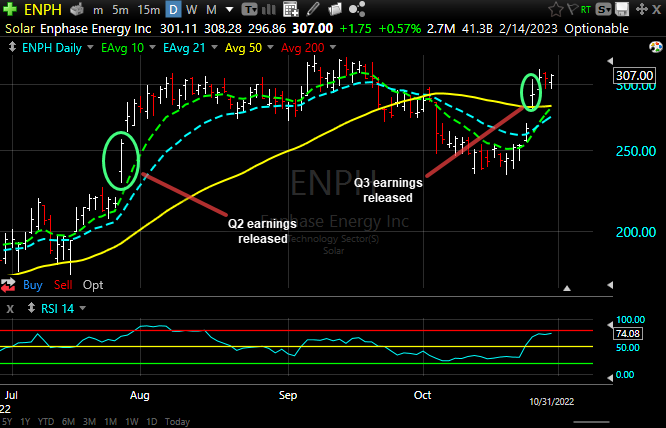 SolarEdge hasn't performed quite as well as ENPH, but the stock is worth consideration based on where it's trading in its two-year price channel.

SolarEdge stock has been bouncing between about $200 and $375 since late 2020, and with its earnings scheduled to be released next Monday and the stock trading around $230 it is worth a look if it dips toward $200 with a weekly stop under that figure.