What may be of greater importance, however, is the yield on the 10-year Treasury closed below its near-term uptrend line as did the U.S. dollar, both of which were putting pressure on the large-cap tech sector. These improvements suggest we shift our near-term outlook. 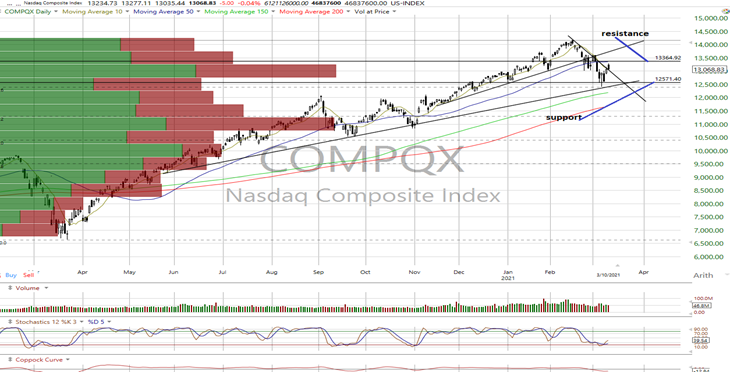 The major equity indices closed mostly higher Wednesday with positive internals on the NYSE and Nasdaq.

Also, the Russell 2000 closed above its near-term downtrend line and is now neutral as is the S&P 500.

The Nasdaq Composite and 100 remain in negative trends as of the close with all others bullish.

Market breadth saw some improvement with the All Exchange and Nasdaq cumulative advance/decline lines turned neutral from negative with the NYSE's staying bullish.

As noted above, the yield on the 10-year Treasury and the U.S. dollar closed below their recent uptrend lines that had previously been putting pressure on the technology sector. They may now suggest some relief from that recent pressure.

This week's Investors Intelligence Bear/Bull Ratio (contrary indicator) was little changed at a bearish 18.6/53.9, suggesting too much optimism still exists on the part of investment advisors.

The Open Insider Buy/Sell Ratio remains bearish 20.4 and continues to be a concern. As such, the psychology basket remains mostly cautionary.

Valuation still appears extended with the forward 12-month consensus earnings estimate for the S&P 500 from Bloomberg of $174.09 per share, leaving the S&P's forward P/E multiple at 22.4x while the "rule of 20" finds fair value at 18.5x. We reiterate the valuation spread has been consistently wide over the past several months while the forward estimates have risen rather consistently.

The 10-year Treasury yield is 1.52%. Its chart suggests a pause of the recent rise in yield, in our opinion.

With improved breadth, neutral OB/OS levels and the shift in trend for the 10-year Treasury and U.S. dollar we are shifting to "neutral" from "neutral/negative" in our near-term outlook for the equity markets.

Get an email alert each time I write an article for Real Money. Click the "+Follow" next to my byline to this article.
TAGS: Currencies | Indexes | Investing | Markets | Stocks | Technical Analysis | Treasury Bonds | U.S. Equity