Let's talk about an indicator I rarely, if ever, look at. I am only bringing it up, because others have discussed it quite often in recent days. It is the percentage of S&P 500 stocks that are trading over their 200-day moving average.

You can see it is just a smidgen over the January peak, as it is kissing 90% now. I see many citing this as very bullish, so I went back to have a look at the last time it had gotten this high. It was mid-year 2014.

The picture in 2014 looks quite different, because there was so much back and forth and churning in this indicator throughout the spring. In other words it made its way to that 90% area slowly, which is not the case now. In 2014, it took from early February until July to go from 60% to 90%. In 2020, it has gone from 60% to 90% in a few weeks.

Now look at the chart of Russell 2000 fund (IWM) , since we know that a high level or participation is associated with a strong move in small caps. I figured there would be some warning, like a move to 90%, then IWM would back off and rally again and we'd see a lower high in the percentage of stocks over their 200-day moving average lines. But that wasn't the case. Not in 2014. The small caps just fell off a cliff.

I also remembered that oil stocks were loved back then. That might have been the last time they were truly loved with the small exception of a rally in early 2016. Here's what I found interesting. If we use Energy Select Sector SPDR fund (XLE) , we see that it peaked in June and as the percentage of stocks over their 200-day moving average lines were peaking, XLE was making a lower high.

In any event, this is only one example where this indicator has gotten so extreme, but I think what it does is confirm what I have said since midweek last week: The market is overbought. I have added that there is a high level of complacency as well, which you don't see on this particular chart.

My own Oscillator is still relatively high, but at least it is finally rolling over to work off the overbought-ness.

I was quite surprised to see the Investors Intelligence bulls did not tick over 60%, but rather are just shy at 59.6%. The bears lost a bit more than a full point and are now at 18.2%. That still shows too much bullishness in my view. 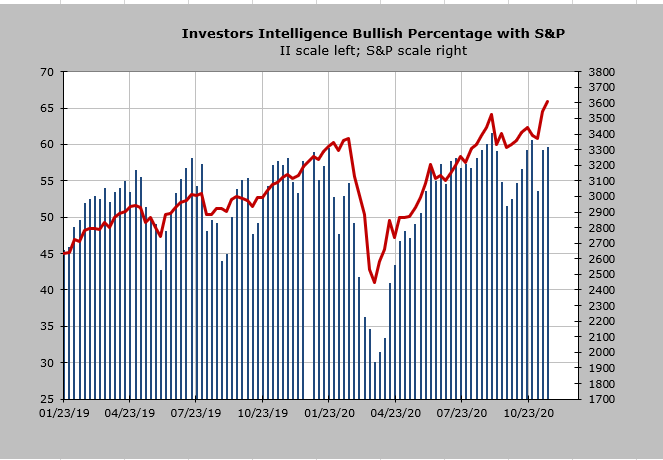 This is why I continue to think we need to see a pullback -- likely in small caps -- to work off that overbought reading and high level of complacency. It's possible we just chop sideways but down tends to shake out the complacency better.