During the Mad Money Lightning Round Tuesday evening, here's what Jim Cramer had to say about one of the stocks that callers offered up, Applied Materials (AMAT) : "This is the stock to watch. They are geniuses. I think this stock makes a stand at $118," explained Cramer.

When we reviewed the charts of AMAT on April 8 we wrote that, "The charts of AMAT are getting a bit stretched on the upside, so I do not feel real confident about recommending new long positions here. Longs from lower levels should consider raising sell stop protection to $124."

In the daily bar chart of AMAT, below, we can see that the shares have worked lower since our April review and into early May. Prices are testing the rising 50-day moving average line and are close to our recommended $124 stop level.

The On-Balance-Volume (OBV) line has been weakening from early April telling us that sellers of AMAT have been more aggressive. The trend-following Moving Average Convergence Divergence (MACD) oscillator is pointed down.

In the weekly Japanese candlestick chart of AMAT, below, we can see that the shares have staged a significant rally from its March 2020 low. The slope of the 40-week moving average line is positive.

The weekly OBV line shows a rising trend from late October but certainly not as robust a rally as we have seen in price. The MACD oscillator is still bullish but very likely to soon cross to the downside for a take profit sell signal.

In this daily Point and Figure chart of AMAT, below, we can see a potential downside price target in the $114 area. If prices declined that far it would trigger my suggested $124 stop and also break Jim Cramer's $118 area. 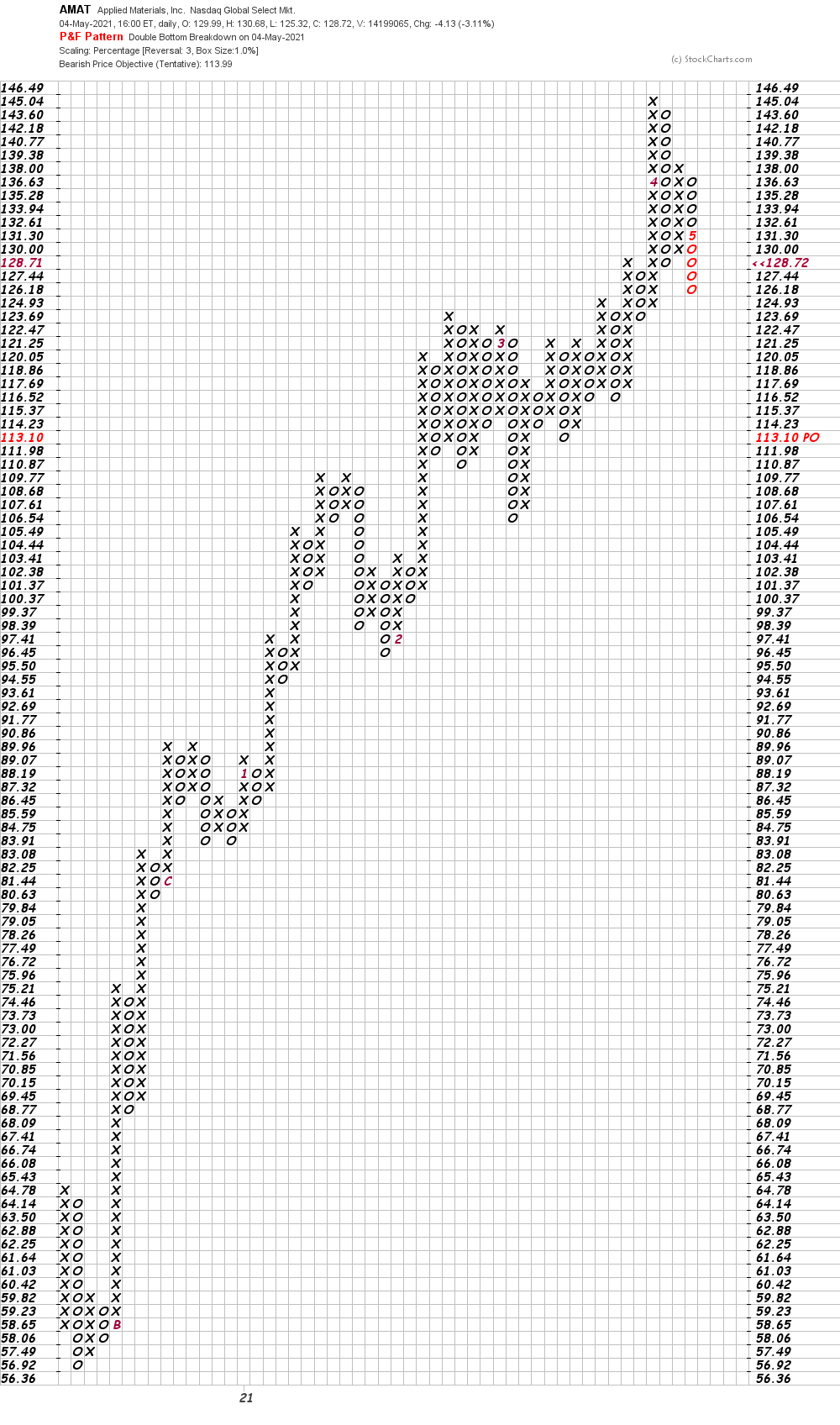 Bottom-line strategy: I have recommended a sell stop at $124 on AMAT and Jim Cramer told a Mad Money viewer that $118 needs to hold. Take your pick.

Applied Materials is a holding in the Trifecta Stocks portfolio. Click here to learn more about this portfolio, trading ideas and market commentary product.

Get an email alert each time I write an article for Real Money. Click the "+Follow" next to my byline to this article.
TAGS: Investing | Stocks | Technical Analysis | Semiconductors & Semiconductor Equipment | Mad Money