We have reason to believe the recent slide in the equity indices may be closer to a low and a poor exit point, at least for the near-term.

All the major equity indices closed lower Friday with broadly negative internals and heavy trading volumes due to options expiration. However, some of the data is suggesting some bounce in the markets may be forthcoming.

All the major equity indices closed lower Friday with very negative internals and heavy volume with all closing art or near their lows of the day.

All but two of the indices closed below support and their 50-day moving averages. So, the S&P 500, DJIA, Dow Jones Transports, MidCap 400, Russell 2000 and Value Line Arithmetic Index are now in near-term downtrends and below their 50 DMAs.

In contrast, the Nasdaq Composite and Nasdaq 100 held support, closed above their 50 DMAs and remain in short-term uptrends. Their action, in our opinion, adds further support to our speculation regarding market rotation over the past several sessions.

On the negative side, the cumulative advance/decline lines for the All Exchange, NYSE and Nasdaq are now negative and below their 50 DMAs.

Stochastic levels, however, are very oversold and offer some hope although bullish crossovers have yet to appear. 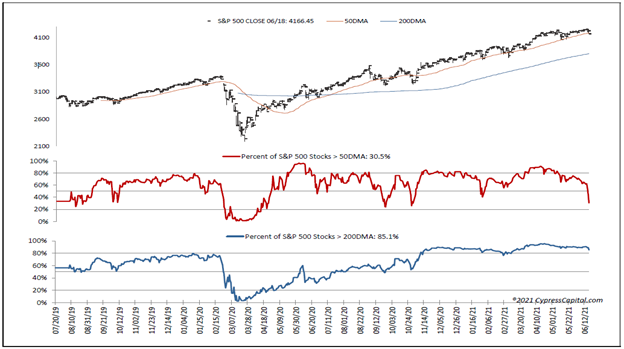 Of possible importance is the percentage of S&P 500 stocks trading above their 50 DMAs (see above) slid down to 30.5%. While one might think that to be a negative, it is at levels that has been coincident with market lows over the past two years only with the exception of March 2020 when COVID rocked stocks.

The McClellan 1-Day Overbought/Oversold Oscillators are now oversold on the All Exchange and NYSE, also suggesting bounce potential (All Exchange: -55.89 NYSE: -80.51 Nasdaq: -36.55).

The Rydex Ratio (contrarian indicator), measuring the action of the leveraged ETF traders, dipped to 1.19 but remains in bearish territory.

Last week's contrarian AAII bear/bull ratio (22.31/40.24) turned mildly bearish as bears declined while bulls increased. This was also the case also for the Investors Intelligence Bear/Bull Ratio (contrary indicator) at 16.2/54.5, which remains on a bearish signal.

The Open Insider Buy/Sell Ratio was unchanged at 20.9 and remains bearish.

Valuation finds the forward 12-month consensus earnings estimate for the S&P 500 from Bloomberg rising to $191.96 per share.

The S&P's forward P/E multiple dropped to 21.7x with the "rule of 20" finding fair value at 18.6x as the overvaluation gap narrowed.

The 10-year Treasury yield dropped to 1.45%. We now view support at 1.4% and resistance at 1.56%. The 10-year yield has been in a downtrend since its March peak, which we view as a positive for equities in general.

We are inclined to maintain our current near-term "neutral/positive" macro-outlook for equities.

I Dusted Off an Indicator I Rarely Check, and Look What I Found

Let's look at the percentage of stocks trading over their moving 200- and 50-day average lines. The charts might surprise you.