The Nasdaq rose approximately 15% from October 13 through December 1. This gave investors some hope that what has been a miserable year would at least end on a high note as we headed into 2023.

However, that rally has started to fade in December on rising concerns about a recession in the coming year and continuing higher interest rates. The tech-heavy index has now shed more than 4% of its value over the past five trading sessions and is down nearly 30% for 2022 once again.

As my regular Real Money readers know, I don't have much conviction around equities as we close out 2022. Indeed, I noted in my Monday column that I believe the Federal Reserve could easily make another policy mistake and hike rates further into a jobs market that is not nearly as strong as recent BLS reports would make it appear. That could quickly lead to a "hard landing" in 2023.

I continue to raise the cash allocation within my portfolio as covered call positions expire in the money every month. That doesn't mean I have given up looking for new trading ideas, though.

In times like this, I like to peruse what company insiders are buying with conviction, as a starting point for research. So, let's highlight a couple of stocks insiders appear to be voicing their confidence in recently. 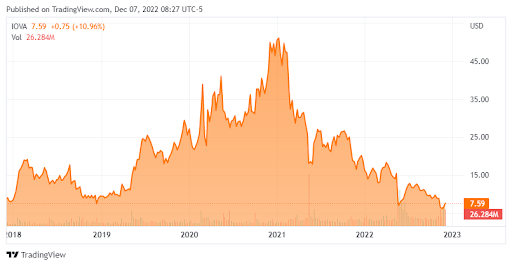 Let's start with Iovance Biotherapeutics (IOVA) whose shareholders have had a rough go of it since the start of 2021.

Recently, the stock took another hit in mid-November when the FDA announced that it was extending the completion timeframe of the company's rolling biologic license application, or BLA submission, for its cancer therapy lifileucel for additional information. Unfortunately, these types of occurrences have increased since the pandemic at the FDA. My guess is this is because either a lack of staffing at the government agency or a primary focus on approving Covid treatments, tests and vaccines. Iovance states it now expects to complete its BLA application in the first quarter of 2023 rather than by year-end due to the FDA request.

One insider sure seems to believe this will turn out to be a temporary setback, however. A director at Iovance bought some $65 million worth of shares earlier this week.

Seven analyst firms, including Oppenheimer, reissued "Buy/Outperform" ratings after the FDA news broke last month. Price targets proffered ranged from $16 to $30 a share. The stock currently trades for just above $7 a share.

AMERCO (UHAL)  , the parent of company of U-Haul International, also continues to see heavy insider buying. Insiders and beneficial owners added more than $100 million to their holdings collectively in November.

The stock has done well since I highlighted it here as a winner due to the great exodus out of major cities such as Chicago and the explosion in the virtual workforce. The company's storage business is seeing 25% revenue growth.

Meanwhile, the company recently effected a 9-for-1 stock split and will be changing its name to U-Haul Holding Company at the end of 2022. Insiders seem to be signaling that there is still upside ahead for this equity, which trades for approximately 11 times earnings.

Get an email alert each time I write an article for Real Money. Click the "+Follow" next to my byline to this article.
TAGS: Investing | Markets | Stocks | Trading | U.S. Equity