It seems every January a common theme emerges within my portfolio. Some of my worst performers in the prior year have big moves up to start the new year.

I would imagine some of this is due to tax-loss selling that occurs primarily in the fourth quarter of every year. Indeed, Real Money's Jonathan Heller creates and tracks a portfolio each year specifically based on this phenomenon. Some is also probably due to algorithmic momentum-based program trading.

Whatever I want to chalk it up to it does seem a consistent event every January, though.

Today, I will a couple of these names that are off to good starts to 2023 and could have more room to run. 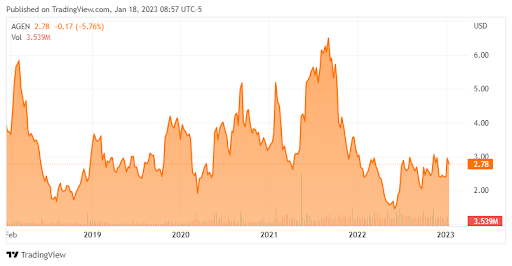 Let's start with small-cap biotech name Agenus Inc. (AGEN)  , which I have highlighted a few times as one of my favorite "rinse, wash, and repeat" covered call trade ideas.

Options against AGEN are liquid and tend to be lucrative. The stock also has been stuck in trading range of between $2 and $6 a share for more than a half decade. The shares are bouncing off the floor of that range right now with better than 15% gain in 2023 so far.

Agenus reported some promising early-stage trial data in November, should have several other readouts in 2023, and has a half dozen collaboration agreements in place, including with drug giant Bristol-Myers Squibb (BMY) .

It would not surprise me if this is the beginning of a move back up to the upper end of the stock's long term trading range.

Moving out a bit on the risk scale, we come to Amarin Corporation plc (AMRN) .

To be honest I almost gave up on this biopharma name in 2022 when it lost two-thirds of its value. Fortunately, my entire position was within covered call holdings, which helped mitigate some of the downside. That also probably forced me to be more patient than I otherwise would have been with the stock. Sometimes it is better to be lucky than good, as the golf saying goes.

The shares are off to a rip-roaring start here in 2023, rising some 65% in the first few couple of weeks of the new year. 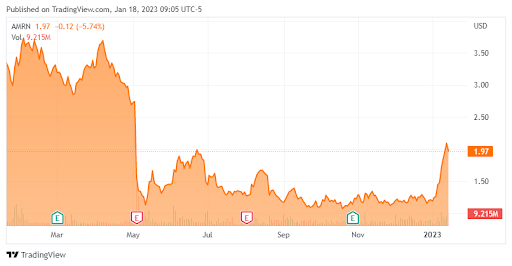 This earned the company some positive commentary from Cantor Fitzgerald which reaffirmed its "Buy" rating and $5 price target. The company's largest shareholder is also now pushing for changes in the management team, a move I think is long overdue and could also result in positive change at Amarin.

Hopefully the big move in this equity means more good tidings for its long-suffering shareholders for the rest of 2023.

Get an email alert each time I write an article for Real Money. Click the "+Follow" next to my byline to this article.
TAGS: Fundamental Analysis | Investing | Small Cap | Stocks | Trading | Biotechnology | U.S. Equity