I have found over three decades of investing that a majority of investors like to consider themselves contrarians. However, in reality, the market seems to experience more herd mentality than anything else. This includes analyst firms as well. Today I'll profile two analyst calls that were made earlier in the week that seem genuinely contrarian.

Few parts of the economy have been challenged more by the Fed's most aggressive monetary policy since the early 1980s than the housing sector. Average mortgage rates have doubled from where they began 2022, which has had a huge negative impact on housing activity as existing home sales now are running about one third lower than where they were a year ago. This drop in home sales has triggered significant layoffs at real estate concerns such as Redfin (RDFN) and large-scale job losses in the mortgage divisions at banks such as Wells Fargo (WFC) .

It is hard to see much improvement in the housing sector until the central bank pivots, which seems some way off. That didn't stop Bank of America from slapping a double-grade upgrade on tech-driven home buying platform Zillow Group  (Z) on Monday.

The analyst in charge of Zillow coverage there said he recently has grown "more confident that growth can return to double-digits in 2024 on improving affordability." In addition, he believes several recent company initiatives such as an increased focus on financing and identifying high-intent home buyers will lead to a doubling of adjusted EBITDA from fiscal 2023 and to fiscal 2025. 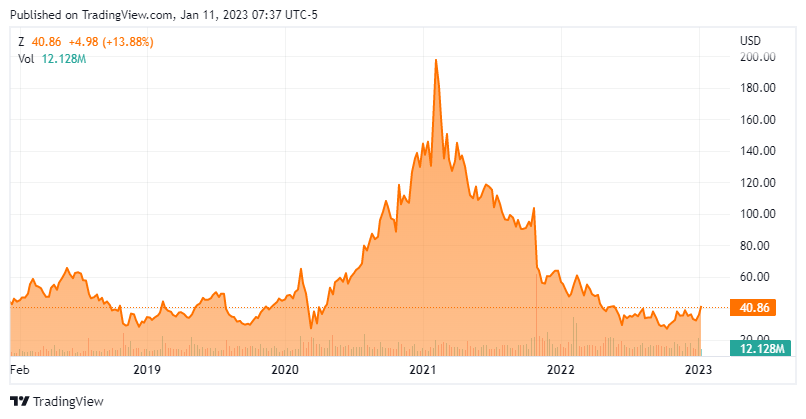 Zillow's stock as you can see in the chart above has been pummeled since the beginning of 2021. However, the shares do seem to be finding a floor right at long-term technical support levels in recent months. This is a name I have been slowing accumulating via covered call orders. Despite substantial headwinds, Zillow will be nicely profitable in fiscal 2022 and its app I have found is quite useful and most sticky.

Then there is recreational vehicle manufacturer Thor Industries (THO) , which basically makes houses on wheels. After enjoying a Covid lockdown boom, the RV industry has fallen on hard times thanks to higher interest rates, supply chain issues and ebbing demand. This is another stock that appears to be trying to establish a bottom, however.

D.A. Davidson upgraded Thor Monday and hiked its price target $20 a share to boot. Davidson's analyst cited the large attendance and better-than-expected retail sales at the Cleveland RV show for his renewed optimism as sales at most dealers mimicked the robust levels of 2020. While Davidson is still at a "Neutral' rating, it is good to see get some rare positive analyst commentary around this industry leader. 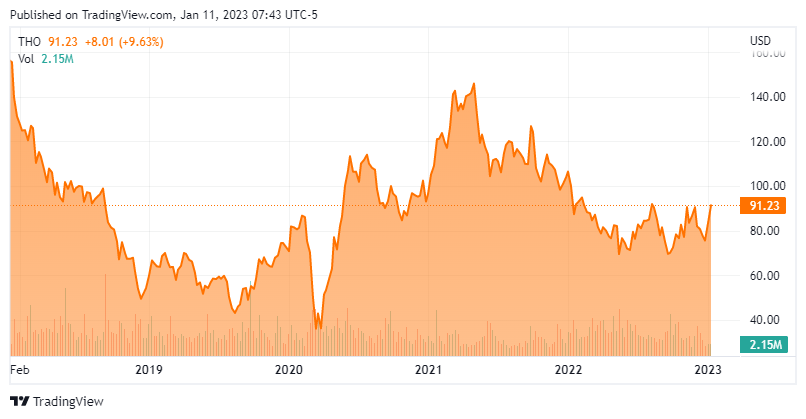 There is no doubt that revenues will fall significantly at Thor in fiscal 2023 as wholesale shipments are projected to drop 21% across the industry. However, Thor still should print out at least $7 a share in profits and the stock carries a 2% dividend yield. Thor consistently and handily has beaten quarterly estimates throughout fiscal 2022 and has an aggressive share buyback program in place. While it is too early in the cycle to establish a large stake, I probably will initiate a small watch item in these shares in order to keep an eye on Thor's progress in navigating this difficult environment.

Get an email alert each time I write an article for Real Money. Click the "+Follow" next to my byline to this article.
TAGS: Investing | Stocks | Housing Market | Real Money | Analyst Actions | Consumer Discretionary