Snap Inc. (SNAP) stock has been on a tear in 2019, but it will need to tap into two key trends to keep that momentum moving.

With the shares up about 150% for the year, it will be imperative that the company give more reason for optimism to avoid a reversion back to a more stable trading level. To do so, CEO Evan Spiegel and his team will need to show continuing growth in users from last year's trough and progress toward profitability after years of burning cash.

A headline issue since the day the stock hit the NYSE, a path to profitability remains a contentious question for Snap.

The company has yet to turn a quarterly profit and is again expected to post a loss in its second-quarter report on Tuesday evening. A non-GAAP profit is not expected until 2021, while a GAAP basis positive figure could be another two years out, according to FactSet estimates.

Likewise, given the company's lack of inhibition in capital expenditure amid losses, a positive free cash flow isn't expected to come to the fore for another two years. 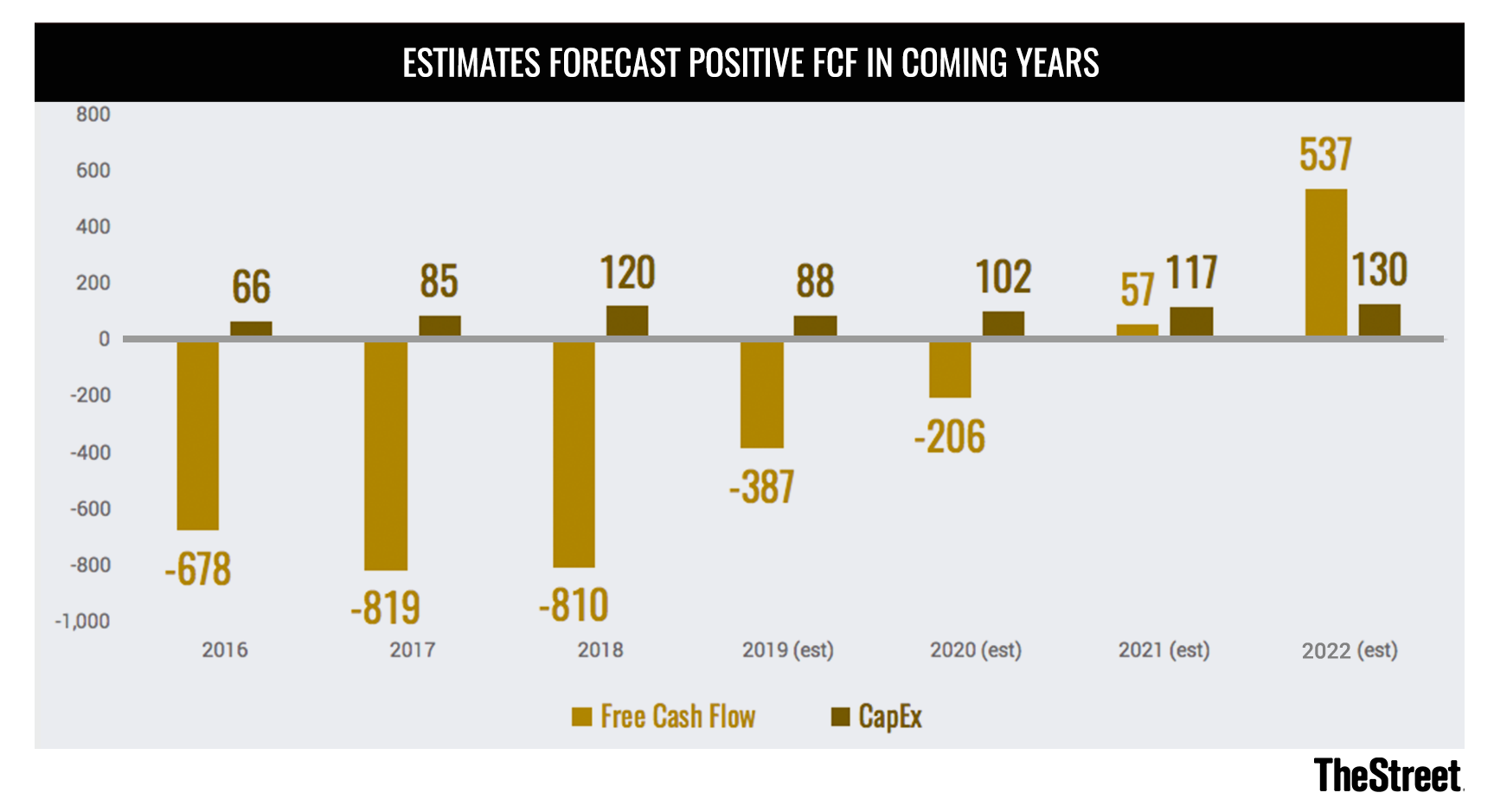 "The company has taken several steps to improve the utility of its app, increase user engagement, and explain its value proposition to advertisers, but increasing spending leaves us concerned that Snap will not achieve profitability until 2021 at the earliest," Wedbush analyst Michael Pachter warned, highlighting this trend. "Slow progress toward profitability, current valuation leaves little room for multiple expansion, as greater investor confidence in current management and the potential for earlier-than-expected profitability appear to be largely priced in."

Yet this debate has itself become a battleground wherein bulls highlight the roadmap in the long term that could reward patient shareholders and continue some momentum in the near term.

"We believe Snap has a long runway for monetization ahead as ARPU remains a fraction of its peers'," Stifel analyst John Egbert said. "We view risk / reward as attractive at current levels, with further potential upside if Snap is able to re-accelerate revenue growth in the coming quarters and take bigger strides toward nearterm profitability."

The importance of average revenue per user acceleration was highlighted in the company's redesign of its platform for more advertiser engagement, which could lead to an ARPU number more in line with peers. Twitter (TWTR) , for example, did not achieve a positive GAAP EPS for its first five years as a public company, but has recently brought up ARPU to garner profits for each quarter since fourth quarter 2017 (the same quarter Trump took office, by the way).

Twitter stock has taken off since that first reported positive net income, suggesting it could pay for investors to get ahead of the move. For more cautious investors, it suggests there is time to wait until this comes more clearly into view.

While the aforementioned redesign has allowed Snap to continue average revenue per user growth, it severely tempered daily active users and has been seen as the main culprit for the stock's steep slide into the back half of the year.

As such, at least a stabilized user base will be pivotal to promoting a positive earnings reaction.

The issue is that analysts are projecting a record level of daily active users, setting a high bar for Spiegel and Co. to clear. 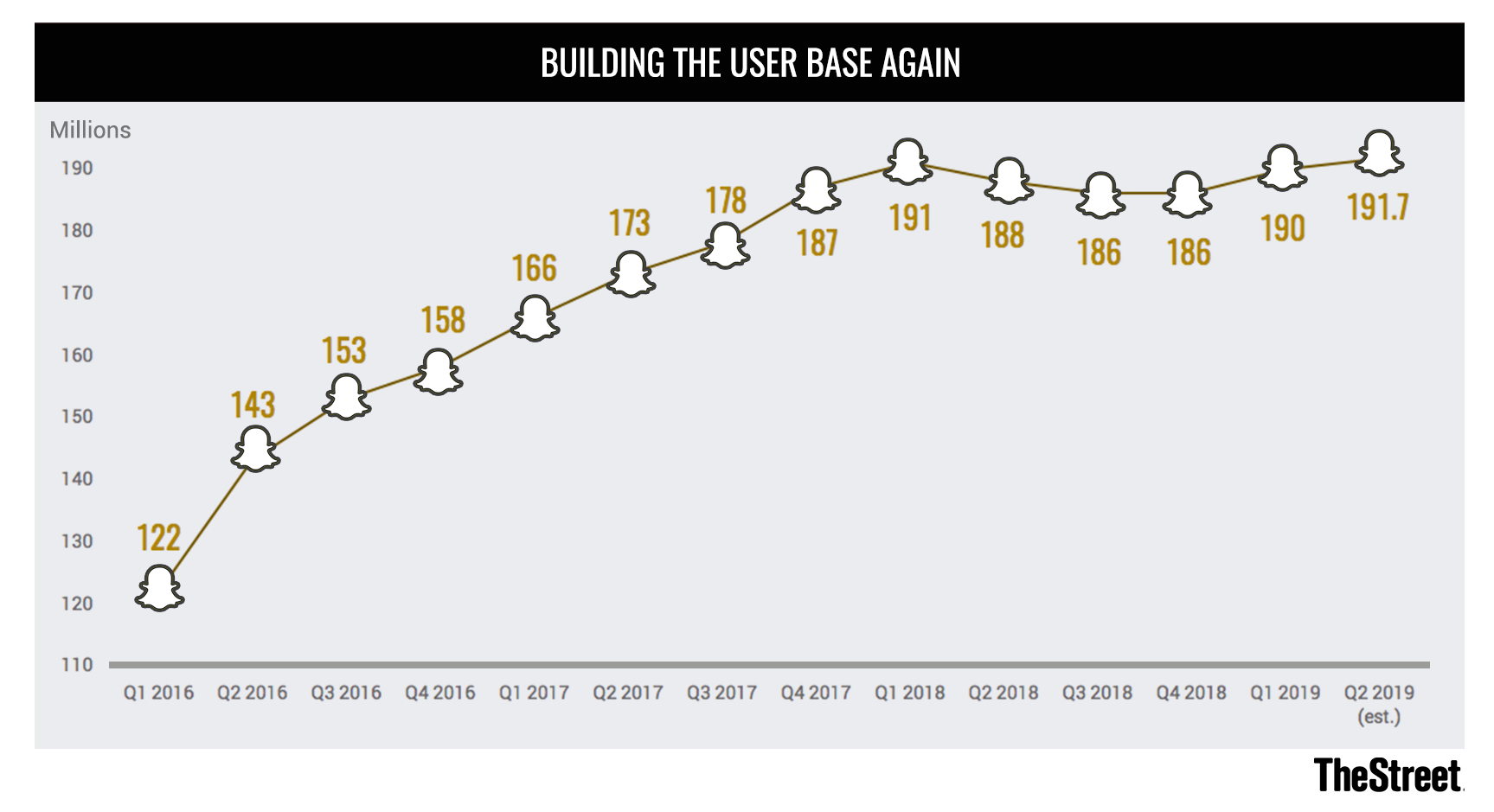 For bullish analysts a projection of just 2 million added users is only half of what was added in the first quarter. Skeptics may instead note that this quarterly jump came after a decline of 5 million users in 2018 and remained below the first-quarter 2018 level.

With substantial social media market competition, the quarterly growth in users will be a true test.

Going in on the Earnings Game

With division on what to expect in the earnings release among those covering the stock, setting up a firm conviction seems like a fool's errand. This is especially so when a stock is this red hot into a release, generally indicating that even strong numbers in these key metrics might not be enough to generate much upside.

In times of such uncertainty, some wisdom from Jim Cramer is always helpful, for both Snap and earnings previews in general.

"It's a difficult time, not a lucrative time," he commented earlier this month to prime the season. "I prefer bat on the shoulder and defensive hitting first. Maybe you will get hit by a pitch or walk. But home runs during earnings season? There are a lot fewer of them than you think."

In the end, it might be reasonable to listen to the call and parse the print. At least at this point you'll know what we're looking for.

For a look at what the charts are telling traders ahead of the release, click here.