The charts say caution is warranted.

Indeed, with Monday's declines, some 50-day moving averages of the major equity indices were violated to the downside and a few "gravestone doji" signals appeared. Meanwhile, the psychology data continues to suggest an excess of bullish expectations on the part of investors persists while insiders have yet to show any significant interest in buying their stocks at current levels.

So, while the proverbial horse may have left the barn, the new chart signals combined with the sentiment data suggest we shift our near-term macro-outlook for equities from "neutral/positive" to "neutral".

Tuesday's close may well be an important factor regarding the very near term. If no rally near the close appears, it would, in our view, be another negative. 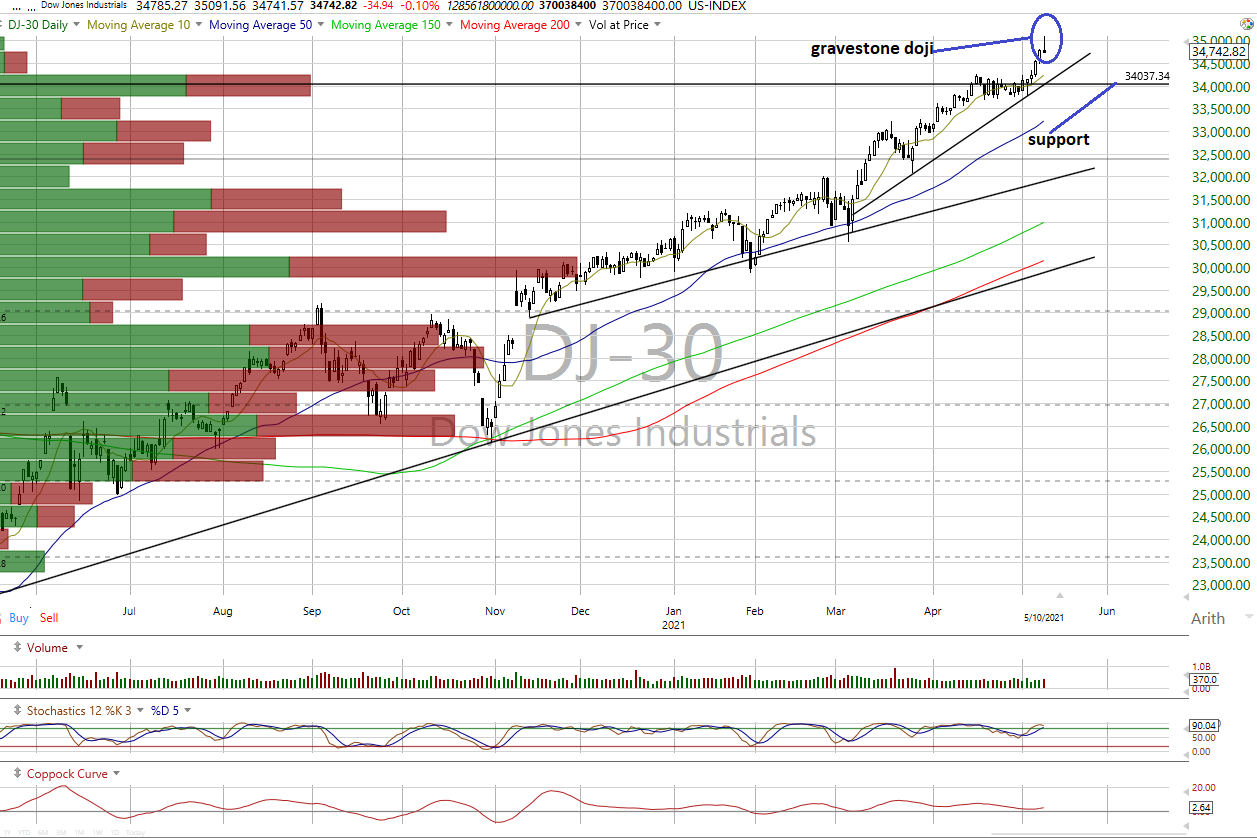 All the equity indices closed lower Monday with negative internals and higher trading volume on both the NYSE and Nasdaq.

Chart weakness was seen on the Nasdaq Composite and Nasdaq 100 as both closed below their 50-day moving averages and the Composite returned to a near-term downtrend.

The DJIA (see above)  and Dow Jones Transports, which had been leading the markets, formed "gravestone doji" patterns that occurred after a long uptrend. The pattern formation is one where a stock or index opens, trades nicely higher intraday but then closes back down at or very near the open price. It suggests an exhaustion of buyers.

The Value Line Arithmetic Index also flashed a bearish stochastic crossover signal. Near-term trends are negative on the Nasdaq Composite, Nasdaq 1000 and Russell 2000, with the rest positive but likely to be violated Tuesday.

Cumulative breadth remains negative on the All Exchange and Nasdaq but positive on the NYSE.

Sentiment indicators still suggest an excess of bulls as the wall of worry needs repair. The Rydex Ratio (contrarian indicator), measuring the action of the leveraged ETF traders, is still in bearish territory at 1.2.

This week's Investors Intelligence Bear/Bull Ratio (contrary indicator) saw a rise in bullish sentiment at 16.8/60.4 as the AAII bear/bull ratio at 23.1/46.3 as both remain in bearish territory.

The Open Insider Buy/Sell Ratio is bearish as well, at 24.0, as insiders continue to sit on the sidelines.

Valuation still appears extended with the forward 12-month consensus earnings estimate for the S&P 500 from Bloomberg rising to $188.97 per share. This leaves the S&P's forward P/E multiple at 22.2x. The "rule of 20" still finds fair value at 18.4x. The valuation spread has been consistently wide over the past several months while the forward estimates have risen rather consistently

As discussed above, the charts and data now suggest caution has become more advisable.