Some clouds are starting to gather after a couple of shifts on the charts.

Meanwhile, our daily review of over 1,200 individual equity charts gives us some concern. Oh, and forward earnings estimates for the S&P 500 continue to slip.

Let's get into all this in more detail.

The bulk of the major equity indices closed lower Tuesday with positive internals on the NYSE while the Nasdaq's were negative. Trading volumes rose on both exchanges.

The two exceptions were the Dow Jones Transports and Russell 2000, which posted gains.

A couple of events occurred on the charts. While they were not "major," they do raise a few yellow flags.

The Nasdaq 100 (see below) closed below its short-term uptrend line while flashing a "bearish stochastic crossover" signal while the DJIA flashed a bearish crossover as well. So now all of the near-term trends are neutral with only the S&P 500 and Transports in short-term uptrends. 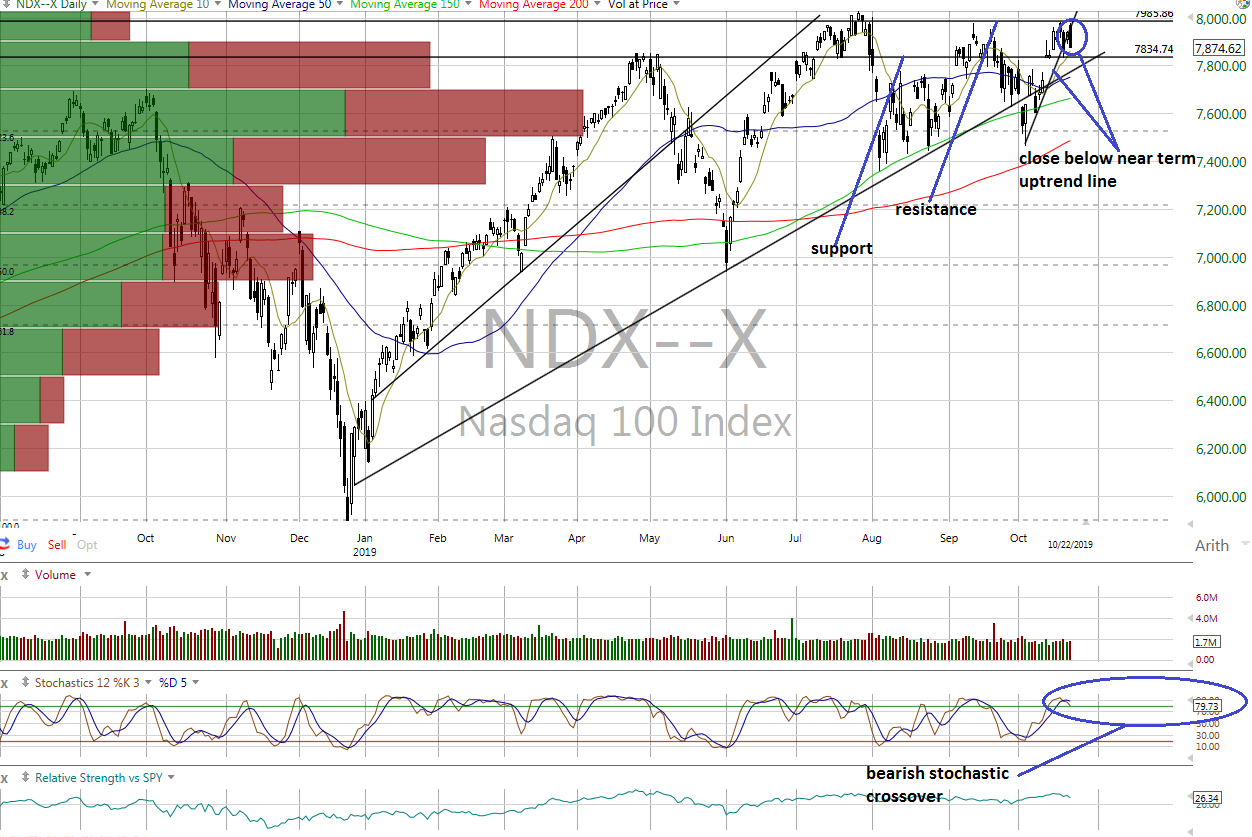 The stochastic levels remain overbought on those indices that did not turn bearish Tuesday while the cumulative advance/decline line for the All Exchange, NYSE and Nasdaq remain positive.

Yet with the positive A/Ds, we are seeing, in our opinion, a significant number of stocks that appear to be rolling over during our daily scan of 1,200 names.

High "volume at price" (VAP) are supportive across the board.

The data remains mostly neutral, including all of the one-day McClellan Overbought/Oversold Oscillators (All Exchange:+42.87 NYSE:+44.37 Nasdaq:+44.11).

The percentage of S&P 500 stocks trading above their 50-day moving averages is a neutral 64.0% as is the Open Insider Buy/Sell Ratio at 48.3.

Valuation is appealing, but less so than previously, with 12-month earnings estimates for the S&P 500 slipping yet again to $173.06 per share via Bloomberg. This leaves the forward P/E multiple at 17.3x while the "rule of twenty" finds fair value at 18.2x. S&P estimates have been shrinking daily over the past several sessions.

We have yet to see enough of a shift on the charts and data to alter our near-term "neutral" outlook for the major equity indices.