One thing about the ocean... you just never know.

Went to the beach on Sunday. I hang around beaches a lot, FYI. Summer, winter, balmy weather, nasty storms. Makes no difference.

Sunday was a windy but nice day. I decided to go for a swim. Calm waters. Very odd, being as I just mentioned, the winds were blowing. The ocean was almost lake-like.

I go in. There are other folks around, though not in the water. The water felt really cold. Too cold for a long swim. Anyway, I am really only about 50 to 75 feet off shore. I notice some fellows on kayaks and surfboards moving in on my area in a group. How odd?

Suddenly, I see a dorsal fin. No, make that two dorsal fins, side by side. No tail fin (phew), so at least I know that I'm not in a jam unless one them runs into me by accident. Then a third dolphin breaks the water, then a fourth. Now I realize that I have run into a pod of bottle-nosed dolphins, and there are more than a few of them. I thought the water to be a little cool for them, but I am no expert. Now, I knew why the kayak crowd was tagging along. Long story short, I swam into shore where I at least could stand, and watched until they were nearly out of sight. Lesson learned, over and over again. The waters might be calm, but you never, ever know what might be under the surface.

The broad major indices took a breather on Monday. Both the S&P 500 (SPX) and the Nasdaq Composite (COMP) surrendered some minor ground on reduced trading volume. Lower volume would be expected in the wake of a quadruple-witching Friday, but this was slower than what one might expect, and that's because traders really do not know what to expect themselves this weekend.

Beyond the broadest indices that we use, the markets were actually a little ugly. Interestingly, both the small-cap Russell 2000 (RUT) and the Dow Transports (DJT) surrendered some significant turf (down 1.25% and 1.5%, respectively). Bear in mind that economists look at these two indices as "canaries in a coal mine" indicators when it comes to economic growth.

Is this important for traders to focus on? I think it worthy of some attention that while the broader indices have run to new highs, and stayed close, that these two more highly defined indices have not seen their respective rebounds reach quite so far. And, even more significantly, both the RUT and the DJT have offered up both the 200-day simple moving average (SMA) and the 50-day SMA without much of a fight. I know that certain portfolio managers -- and, without a doubt, the algorithms that matter -- see this as well.

While all four of these indices have benefited technically from what is known as a "golden cross" -- the 50-day SMA crossing over the 200-day SMA -- this past spring, as you can see above, these two indices have never seen the 50-day pull away from the 200-day as have the broader indices. Indeed, with the two lines moving fairly tightly together, the 50-day now appears to be sloping downward toward that 200-day line, especially for the transports.

Run for the hills? Not necessarily. Know the stocks one is in? Definitely.

Among the transports, delivery services are now coming under extreme pressure, as FedEx Corp. (FDX) prepares to report quarterly results on Tuesday evening, just one day after the company announced the reduction of some pricing in an effort to better compete against United Parcel Service Inc. (UPS) , all while it appears that Amazon.com Inc. (AMZN) , after agreeing to lease another 15 cargo planes at the Paris Air Show, might be setting up to steal their lunch.

Interestingly, as security of supply, or rather of cargo in transit, becomes a growing issue anywhere near the Straits of Hormuz, Gulf of Oman, or even more broadly, the Persian Gulf, demand for the sweet stuff is growing. Likely you have noticed the recent dwindling in the spread between Brent Crude and West Texas Intermediate (WTI), now barely more than $6 a barrel apart after a winter spent flirting with spreads closer to $10.

It is when those spreads broaden that international buyers usually tend to find value in the lighter crude of the U.S. Southwest. However, with geopolitical turmoil surrounding the Middle East and the mining of tanker ships in an obvious effort to impede commerce in the area, suddenly large carriers are showing up in the Gulf of Mexico. Very large carriers.

It turns out, according to the Financial Times, that RBC Capital Markets is forecasting that 21 of these VLCCs will be loaded this month along the U.S. coast in the Gulf of Mexico. This is versus the monthly average of 13 and up against an all-time record of 17. Not surprisingly, in this climate, the average day rate for using a modern VLCC is up roughly 69% since earlier this month according to Jefferies Financial Group.

It certainly looks to me that premiums are now being paid for security, and market share is being gained for the Permian versus elsewhere on the planet. Permanently? We'll see. For now, Iran's aggression is costing not just that nation, but the entire region.

Some of you may recall, one of the first stocks I gave you that seems to be playing along with one of my favored technical tools (one that I don't see anyone else use anymore), the Andrews' Pitchfork, was Planet Fitness Inc. (PLNT) . No doubt, this has been a great run for us. But has the clock struck twelve? Is it time to go now?

Planet Fitness does trade at 39x forward earnings. That is because the investor was paying for growth, in earnings and in sales. However, we do have some significant profits to protect here. Let's take a look. 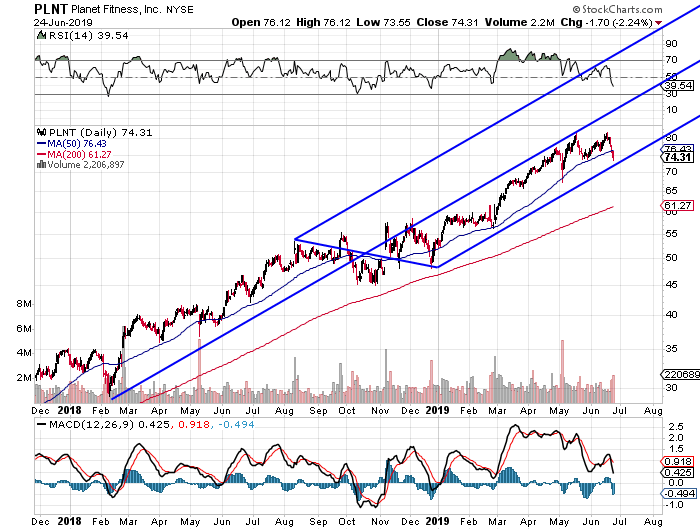 The lower trend line of the pitchfork remains unbroken and can act as support, as it has several times in the past. However, the shares are significantly off the highs of June, while both the Relative Strength Index (RSI) and daily moving average convergence divergence (MACD) send bearish signals.

Most important, I think, might be the 50-day SMA (blue line). That line acted as resistance on Monday, on a third straight down day.

I'll tell you what. If I don't see a serious attempt to retake the 50-day line, then by this afternoon here on Tuesday I will have cut my position by at least a third.

Failure at the Gate 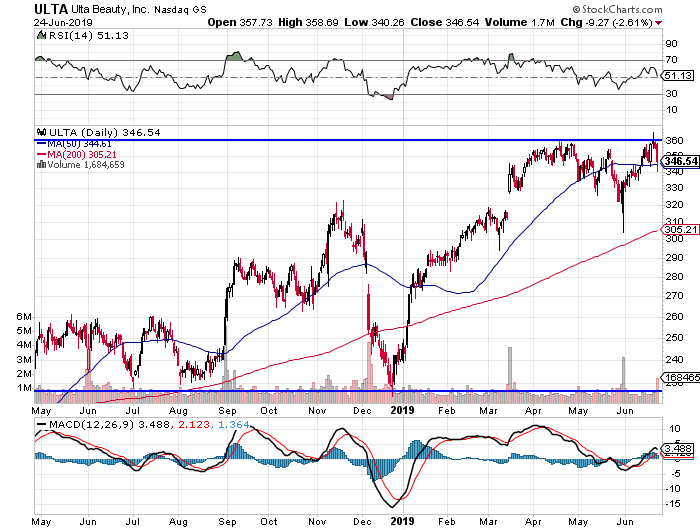 Consider the fate of Ulta Beauty Inc. (ULTA) , now apparently also a target of Amazon. Not that it was not enough to concern investors, but you have a stock that has traded in a range that includes both the $235 level and the $360 level in little more than half a year. Now you can easily see the double (triple, quadruple) bottom and how significant the breakout was.

Now I know several folks who shop at Ulta. They all say the same thing when I ask about the stores: "Oh, I love Ulta." Those are literally the four first words spoken by all of them after this retailer comes up.

Yes, I ask a lot of people things that don't come up in normal conversation. That's why I'm pretty good at this sport.

The name has now been rejected twice in the same spot close to the top of the chart. Do I short ULTA here? Kind of risky, being the stock has been a lightning rod, and even if it's under the attack of the Death Star.

More concerning to me would be the surrender of that 50-day line. That spot has to be regained for me to feel any confidence that the shares might make a third attempt at the top.

At this writing many hours prior to the opening bell, it will be hard to price an options trade for such a high-priced, volatile name. I'll tell you what I'm thinking, though. If I can get long a $340/$320 bear put spread expiring in September for under a net outlay of $7, it may be worthy of a roll of the dice. I'll have to take a look later. Perhaps I'll need to adjust the strikes.

Get an email alert each time I write an article for Real Money. Click the "+Follow" next to my byline to this article.
TAGS: Indexes | Investing | Markets | Small Cap | Stocks | Technical Analysis | Consumer | Energy | Retail | Transportation | Real Money | Consumer Discretionary

Restaurant Stocks Are Leaving a Bad Taste on Their Charts

Three big names -- Chipotle Mexican Grill, Domino's Pizza and Starbucks -- already have lost a lot of ground and could give up more.