While investor psychology continues to suggest an excess of bullish sentiment and overvaluation persists, we believe the charts of the major equity indices and Overbought/Oversold levels remain the dominant factors for near-term market action.

All the major equity indices closed higher Friday with positive internals on the NYSE and Nasdaq.

Also, the S&P 500 (see below) and DJIA managed to reclaim their near-term uptrend lines and are back in near-term bullish trends as are the rest of the indices except for the Russell 2000, which is neutral. 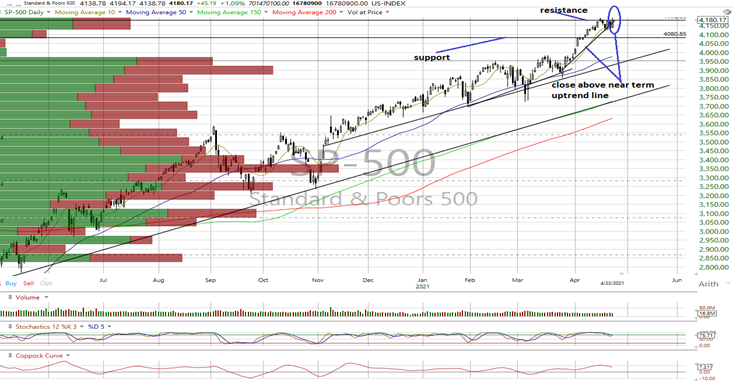 Friday's positive breadth was sufficient to shift the cumulative advance/decline lines for the All Exchange and NYSE to positive from neutral while the Nasdaq's turned neutral from negative.

No stochastic signals of import were generated.

In general, bullish expectations have become excessive, in our opinion, with the sentiment data in need of some rebuilding of the proverbial "wall of worry". New sentiment data will be released Tuesday.

The Open Insider Buy/Sell Ratio is mildly bearish at 24.3.

Valuation still appears extended with the forward 12-month consensus earnings estimate for the S&P 500 from Bloomberg rising to $183.75 per share. This leaves the S&P's forward P/E multiple at 22.7x, while the "rule of 20" finds fair value at 18.4x. The valuation spread has been consistently wide over the past several months while the forward estimates have risen rather consistently.

The chart trends with the OB/OS levels and improving market breadth suggest we maintain our near-term "neutral/positive" macro-outlook for equities intact, despite sentiment and valuation concerns.

The first step is to recognize what is going on as major indices go one way and speculative stocks go another.