How am I supposed to know

Hidden meanings that will never show

Fools and prophets from the past

Life's a stage and we're all in the cast

I turned off everything and closed my eyes. No TV. No trading platform. No bells and whistles. Just me, and Bloomberg Radio.

I had decided ahead of time that I would have Mike McKee tell me. We all have our favorites. I knew that regardless of outcome, I would need at least 90 seconds to think about those April inflation numbers and whatever McKee, who does this probably better than anyone, would have to say about them. Then I would also turn off the radio, print out the information and do my own thinking. No trading, at least not leading into or out of what the Bureau of Labor Statistics had laid out for us.

The numbers were hotter than expected. "White hot" was how Jim Cramer put it on Mad Money. Anyone who's ever screwed around with "Willy Pete" (White Phosphorus munitions) knows that "white" hot is a heck of a lot hotter than "red" hot. Napalm burns at about 2,000 degrees Fahrenheit. Willy Pete cooks at about 5K. White hot.

Equity Index futures did not react immediately either, which is a little strange because algorithms control off-hours price discovery as much as they control what happens during regular market hours. The "algos" waited for a hanging curveball that didn't curve and that ball may not have even landed yet. Equity index futures waited for a nod from the market for U.S. Treasury securities and then it was "game on."

I think what caused those seconds of silence in response to the release of this data was the magnitude of Wall Street's miss. The month-over-month number printed at 0.8%, the hottest monthly print since 1982. Now, considering that the month-over-month print for the one year ago period -- April 2020 -- landed at -0.8%, the weakest of three successive negative months at the start of the pandemic shutdowns, the year-over-year number hit the tape at an exaggerated 4.2%. Again, above consensus view of 3.6%, and above the highest "official" expectation I saw of 3.8%. Yes, off the record, everything traders spoke of had a "4" handle attached.

How have the professionals been so far off yet again? Was not the magnitude of the collective miss for April job creation bad enough? I mean really, why on earth does any business need an economist that is almost never close when it really counts? That's just wasted payroll. You can have anyone off the street, or just have the summer interns (if you have them this year) do work of at least equal quality in their spare time. They can post estimates that badly miss what hits the tape just as easily, and a lot more inexpensively at that.

In response the hottest year-over-year print for consumer-level inflation for any month since 2008, Atlanta Fed President Raphael Bostic said (after September), "We will have to see what is happening with the supply chain disruptions and the commodities prices and these sorts of issues." Sounds peachy. Bostic added, "So for the next four or five months (Sarge says: You thought you might take a summer vacation after this lockdown, didn't you?), I think we are going to see volatility and there's going to be a lot of noise that surrounds the true signal."

My take? The true signal is going to be a matter of "official" opinion.

Fed Vice Chair Richard Clarida stated, "If, contrary to our baseline view, demand relative to supply was excessive and persistent and pushed up inflation and inflation expectations to levels that were not potentially consistent with our mandate, we would not hesitate to act and to use our tools to bring inflation back down to our 2% longer-run goal." Someone from the White House, according to Bloomberg News, on the condition of anonymity, indicated that aides see this transitory period of inflation lasting potentially through year's end.

Hmm... does all that sound like higher prices are transitory? Or does it sound more like everyone seems to count on this year providing an exaggerated baseline for next year, sort of the reverse of what last year's numbers are doing to this year's comparison? There's some food for thought. Bon appetit!!

What is transitory? Just how long does something have to last to be more than temporary?

Currently, we have a mismatch between fiscally fueled demand and constricted supply across large swaths of the economy. This obviously forces pricing higher. The same is true for parts of the labor market. Demand goes unmet as fiscal policy constricts to a degree... in that case... supply.

What we have to decide is how much of this surging demand is temporary, and where the limits of what will be paid to fill demand might be. The pending infrastructure bill is expected to increase demand for raw materials, finished goods,and the transport of such goods to an unknowable extent. Why unknowable? Simple, as borrowing costs rise, the federal government will have to pay more to borrow, and then less to spend on goods and services. Economics ain't rocket science, kids.

We also have to decide just how temporary the kinks are that restrict current supply chains. The chipmakers have told us that they are probably more than a year away from catching up. In addition, the "green" economy is far more expensive than the old-fashioned dirty economy. That's why almost all poor countries do not participate in transitioning over. Then, as downward pressure is placed on the longer-dated end of the Treasury market (upward pressure on yields), we will also have to wonder just how temporary is the ulta-accommodative, ultra-liquid stand being made by the central bank?

Once, as a people, we are able to more clearly see just what is temporary, and what has become structural, then we can make more fundamentally sound decisions. Know this, several key players at our central bank have spoken about having the tools to gently nudge inflation downward if need be. There will be nothing gentle about it,gang. Once the central bank is late, nudging is no longer an option. Nudging needs to start today. Baby steps will only cause the Fed to chase inflation.

Paul Volcker in my opinion, easily the greatest Fed Chair of my lifetime understood aggression, but not right away he didn't. It would be nice if our esteemed committee members could learn the lessons of the past without having to make all of the early errors that nearly every Fed has made without making them for themselves.

Should inflationary conditions persist beyond what this economy can handle, the Fed will be forced to act far more aggressively than they will ever let on publicly. That action, should it come to pass, will not only potentially force economic recession (as we talk about an 11% second quarter), but also force the federal government to delay indefinitely all plans for increased spending.

The Fed needs to be more agile right now than they have shown an ability to be. Using a scalpel now could prevent having to use a sledgehammer later. Obviously, the purchase of mortgage-backed securities needs to stop three months ago. The well-intended extension of once necessary, but now perverse monetary policy has enabled the extension and exacerbation of once necessary but now quite overtly and intentionally perverse plans for ever more lopsided fiscal policy.

Am I shouting in the forest? Is no one else able to see what I see?

I usually buy the dip on big "down" days. On Wednesday I did buy the dip -- but only in gold.

Maybe there is someone who can help. The U.S. Treasury raffled off $41 billion in 10-year paper on Wednesday. The auction went quite well all things considered. Bid to cover printed at an impressive 2.45, which is well above recent averages. Indirect bidders (foreign accounts) took down 63.4% of the entire issue, up from 59.6% for the April auction, and the highest percentage sold to this kind of buyer since last summer. Dealers ended up with just 19.5% of this rather large issuance. For those who do not follow debt markets, that is really light.

Does that mean that foreign central banks do see U.S. inflation as temporary? I mean why would such parties accept a high yield of 1.684% over 10 years from an economy running at an annual rate of inflation that for now stands at 4.2%? That makes little sense... unless... unless they see their peer central bankers being forced to chase down inflation the old fashioned way, and see great benefit in parking their funds in U.S. dollars. Oh boy.

If that's the case, get used to the "Ugly Stick" -- once the stick is out and about, everyone gets whacked. Only those that produce, manufacture or transport survive. 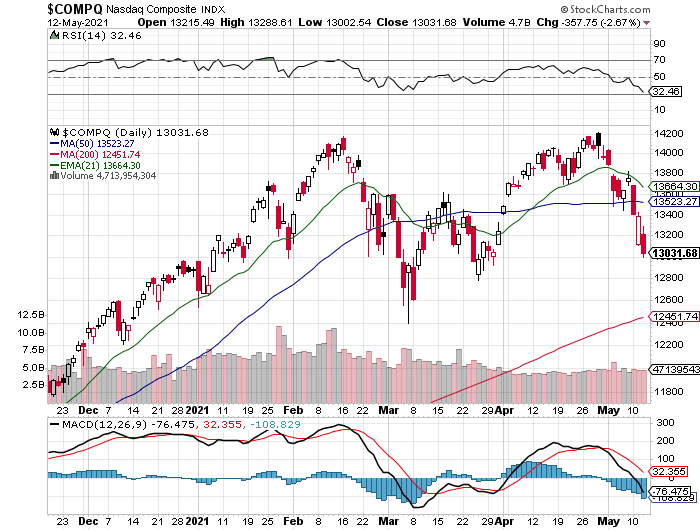 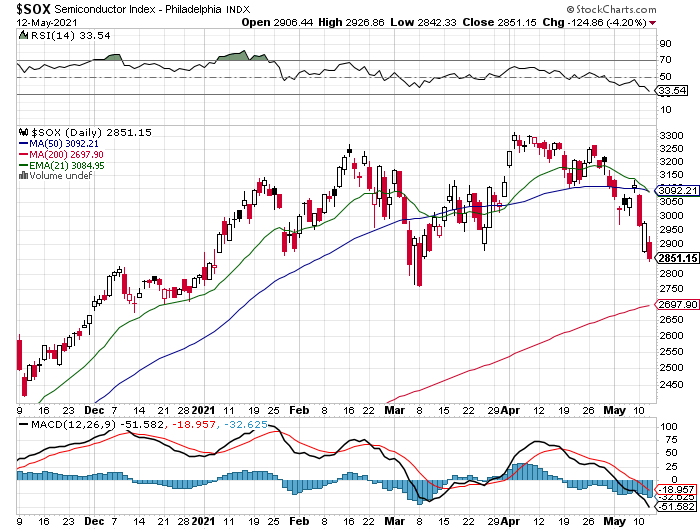 As readers will see, the daily charts of the Nasdaq Composite and Philadelphia Semiconductor Index resemble Field Marshal Douglas Haig's infantry trying to cross "No Man's Land" at the Somme River on July 1, 1916.

I am trading my semiconductor names, but not reducing exposure there as I have elsewhere. You know that I consider computer chips to be very much a commodity and once this dust settles, I expect them to trade like it.

As the shortage drags on, the high-end corporations will have more pricing power than that creep peddling heroin on your street corner. I remain long Advanced Micro Devices (AMD) , Nvidia (NVDA) and Micron (MU) . 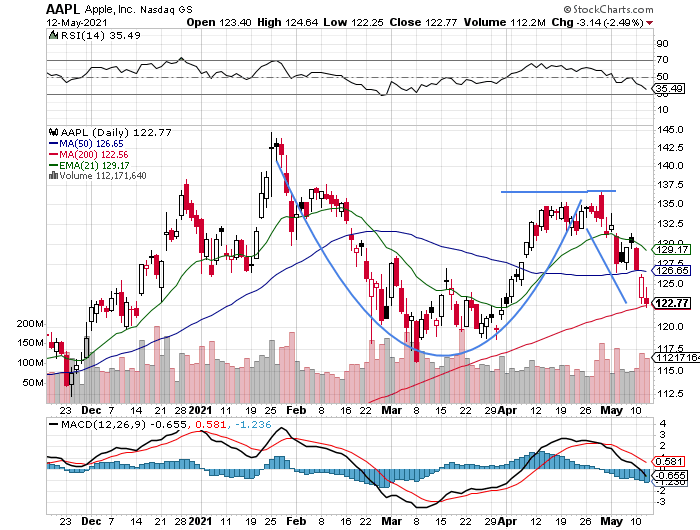 However, once the whistle blew, the boys went over the top, and central power machine guns opened up on infantry now caught out in the open. Apple (AAPL) took refuge behind its own 200-day simple moving average (SMA).

AAPL closed at $122.77. The 200-day line stands at $122.56. Twenty-one cents may have saved the broader market from something far more catastrophic than what we experienced Wednesday. The bell rings in two hours. I see AAPL trading at $122.25.

(DIS, AMD, NVDA and AAPL are holdings in Jim Cramer's Action Alerts PLUS member club. Want to be alerted before Jim Cramer buys or sells these stocks? Learn more now.)

Get an email alert each time I write an article for Real Money. Click the "+Follow" next to my byline to this article.
TAGS: Federal Reserve | Futures | Indexes | Investing | Markets | Rates and Bonds | Stocks | Trading | Treasury Bonds | Semiconductors & Semiconductor Equipment | U.S. Equity