There is quite a difference in the narrative during this rally than there was during the summer rally. I believe it was by July 4th folks were saying the bottom is in. I remember I complained about it. I wrote about how it was impossible to know if it was in. And certainly I wouldn't know until well after the fact.

But what I have noticed now is that there is very little "bottom is in" chatter. Oh last week there were a handful of "new bull market" comments, but mostly the consensus now is that we should get a year-end rally and that come mid-January, when fourth quarter earnings are released, the numbers will be bad and that's when analysts will finally take their estimates down. And of course the stock market should follow.

Then I look at this week's sentiment surveys and I imagine that many (most?) have bought into that narrative. You know, "we're OK through year end, but after that, be careful." I suppose that's how folks justify being long when they are bearish. They call it seasonality, but I call it fear or missing out. That's why I said on Monday that I though folks would be more interested in buying the dip. And I believe we saw that at work on Thursday.

This week we looked at the Investors Intelligence bulls, which are now at 38% (up from 25%). The American Association of Individual Investors (AAII) saw the bulls shoot up to 33%, which turns out to be the highest reading of the year. OK, it's only the highest reading by .2 but I think it shows the conversion we've seen from bear to bull, or at least acceptance that the market should rally though year-end, then watch out. 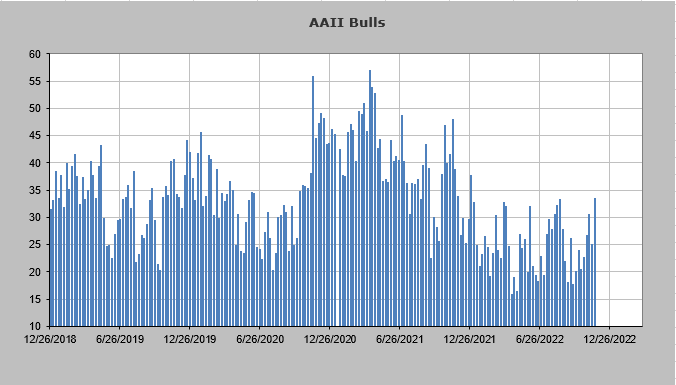 Even the National Association of Active Investment Managers (NAAIM) saw their exposure lift to 65. They were at 72 in August. And 12 at the late September low. 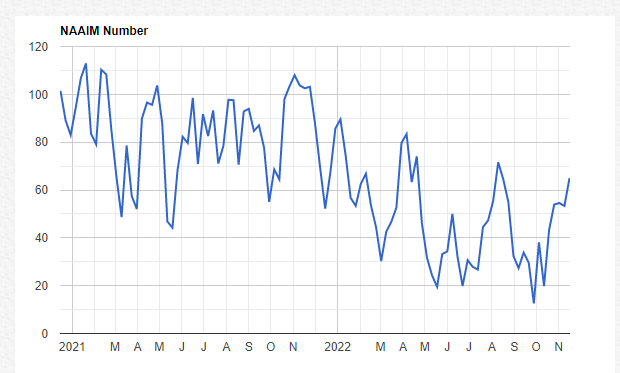 If we move over to the put/call ratio we discover that there was an off-the-chart reading for the equity only on Wednesday. It chimed in at 1.46, which is the highest in more than two decades. There are many who want to rationalize it and understand why and where and how. I hate to rationalize an indicator, so I won't. Rather I would say that a reading that high should usually get unwound sometime in the ensuing week or so (meaning there should be a rally).

My sense is that while folks are not as optimistic as they might have been last summer (earnings were better last summer) they are complacent because of seasonality. I would not be surprised to see us with a pickup in volatility in December.

I had a chat with Dale Pinkert Thursday if you would like to watch the video here.