Who Let The Dogs Out?

At first glance, all one might see is a well-supported, day-long equity market rally on Monday. Look a little closer and what we really see is serious "risk-on" activity that extends across not just the equity landscape, but across all asset classes. Crude rallied with great elan, as did commodities in general, at least those commodities that prove useful in the industrial sense. Precious metals were sold on Monday. Traders also sold the longer end of the U.S. Treasury curve, allowing for a little more breathing room in between short-term and long-term interest rates. This kind of market behavior -- a belief that perhaps "it's all over" -- was indeed, what let the dogs out.

Check this out. For Monday, all eleven S&P 500 sectors shaded green for the day. It's not like what has worked well throughout this public health crisis had failed for the day. Quite the contrary. The Health Care sector, a 2020 leader, finished dead last for the day on the sector performance, yet the Sector Select SPDR ETF (XLV) still managed an increase for the session of 0.83%. The Energy SPDR (XLE) ran more than 8% for the sake of comparison, followed by the Industrials (XLI)  and the Financials (XLF) .

In fact, climbing up the repelling tower and scanning the landscape, we see that the tech- and biotech-centric Nasdaq 100 scored a one day gain of nearly 2%. But the Nasdaq 100 was outperformed by the Nasdaq Composite (+2.4%). In fact, the further, for the day, one gets away from the shut-down economy and toward stocks that can only perform, or perform much better in an open economy, the getting was not just good, it was great, and well graduated.

Follow. The S&P 500 (+3.1%) out-did the Nasdaq Composite. Still moving forward, the Dow Jones Industrial Average ran 3.8%, The Russell 2000 (small-caps) was up 6.1%, and the beleaguered Dow Jones Transportation Average screamed higher at a gain of 7.2%, led for the most part, by the airlines.

You Must Ask Yourself

What have we established? We have established that there are plenty of managers in our business chomping at the bit to capture the tremendous discounts created across financial markets by a lack of economic activity. We have also established that this added market muscle can, or at least yesterday did, come out of cash. Trading volumes were higher at both of New York's primary equity exchanges, in fact significantly higher at the New York Stock Exchange. The fact that stands out is that, at least in aggregate, this crew did not sell anything other than a narrow swath of "public crisis" beneficiaries. Portfolio managers still bought up the semiconductors, biotechs, Staples, and Internet names moderately, even as they gave chase to what many of us refer to as the "old economy."

So, you must ask yourself some questions as we proceed. Monday's monster run was provoked at first, by the seemingly level-headed, cautiously expressed optimism by our nation's leading central banker over the weekend, and then this moderate improvement in sentiment was simply put on steroids by the news that the very earliest results of Phase 1 clinical testing for Moderna's (MRNA) mRNA-1273 vaccine candidate for Covid-19 showed promise across a very small sampling of volunteers. This is why traders acted as if it's all over. This is why markets acted as if awaking from a bad dream. This is why the dogs retook the yard. But is it still a junkyard? The economy has a long way to go, and the virus still lurks, finding areas of weakness in our public defense.

First question. Are vaccines or therapeutic treatments for the coronavirus starting to show evidence of really making progress? Obviously. How soon? Not soon enough. It doesn't work like that. How about today? Almost no shot. The market will remain volatile.

Second question. Will there be more? More what? More policy help -- for businesses, local governments. Individuals. Infrastructure. Almost certainly. On the monetary side, the Fed has proved its metal throughout this crisis. The central bank will provide liquidity. The fiscal side is balky and exposes the nation to tremendous levels of headline risk where both sides will try to appear as the defender of the people. The markets will react to sloppy negotiation. Volatility. Then, once both sides give enough, we'll only have an incredible, and perhaps unmanageable, level of deficit spending to unsuccessfully unwind going forward. Volatility. Long-term.

Third Question. How hot or cold is the re-opening of the nation's economy going to be? This is not a "no-go", but is a "slow-go", and until people feel safe, will remain so. Even on the coasts, the states of New York and California are trying open in stages, many more counties remain closed. Fact is that large population centers have to be far more careful, and the national economy will not dance solo. New York City and Los Angeles need to contribute. This will take a while. Volatility.

Fourth Question. Is the trade war with China back on? Is this yet a cold war? Might the relationship be returned to a more amicable, or symbiotic posture? Where does the WHO (World Health Organization) fit? There is far more than one question here and I do not have the answers. What I do know is that this will be a source of increased volatility, and that in an election year, not likely to reach any solution rapidly.

Last Question. Where does that leave valuation? My guess? Over the short to medium term, valuations remain elevated. Traders have to look past the year 2020, unless at some point debt securities actually end up paying enough to attract investment away from equities. Not necessarily more than the nominal or even real potential offered across equities, but enough to make a more certain return of principal plus a little something extra seem like a good deal.

While Monday's rally certainly felt good, there will not be an upside catalyst or two that passes around the media every day. Far from it. Some of the risks however, might prove more persistent. I am not negative longer term. I am, however, quite receptive to the idea of growing volatility. Some readers will note that enough traders did take profits going into Monday's closing bell to take the large-cap indices well off of their daily highs. 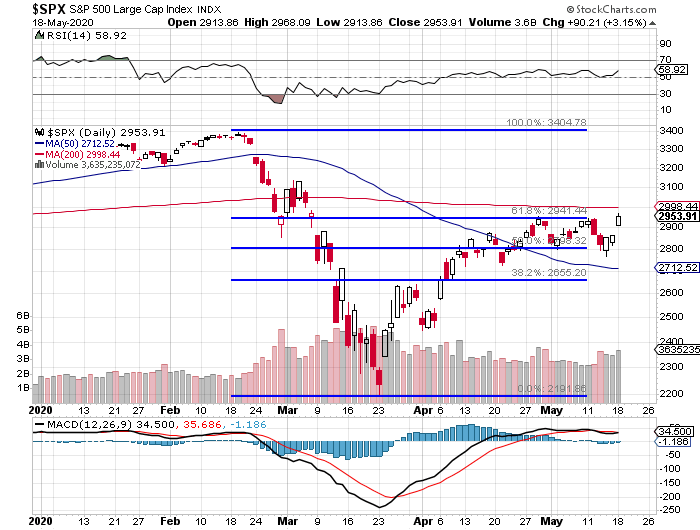 Readers will note that the S&P 500, though having pierced Fibonacci's 61.8% retracement of the February into March selloff, still lies well short of a serious test of the 200-day simple moving average, which is something we'll need to see. 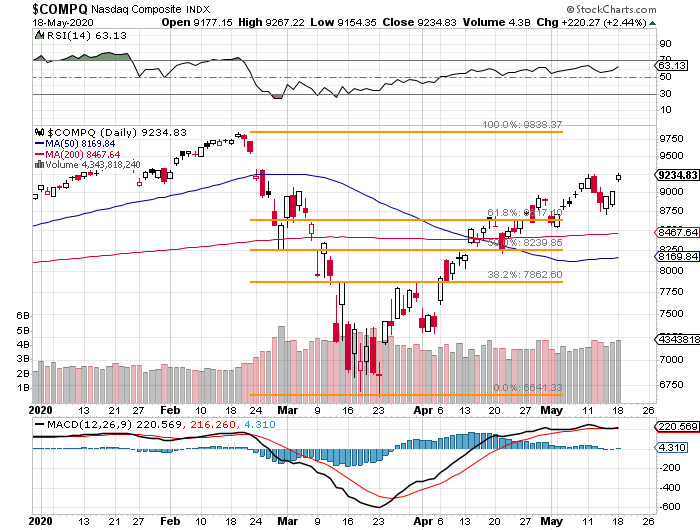 Obviously, the Nasdaq Composite has already moved well past these milestones. That said, for the short-term, trader enthusiasm for both the S&P 500 and the Nasdaq Composite created a gap in between Friday's and Monday's trading ranges that for me, is probably, at least technically... a threat to be filled over the next couple of sessions.

WTI Crude futures for June delivery will expire this day. Yes, it has already been a month since we were all astonished as futures priced for May delivery sunk well into negative pricing. Yes, OPEC Plus had announced production cuts back a couple of weeks, and the Saudis have expressed an interest in taking these cuts even deeper.

This is about demand more than supply, at this point. As China moves past the earliest stages of economic recovery, as the U.S. and Europe just start to try re-opening their economies, there has been an increase in at least some consumer demand for gasoline, which has been going up in price out in my neck of the woods. Lifeline for a tough industry to be in? Let you know later in the year.

My guess is that late Monday news that Moderna (MRNA) had filed a preliminary prospectus for a $1.25 billion public offering of common stock had not gotten past most readers. There is no doubt that the stock was hot after some limited, very positive-looking data had been released in regards to the firm's messenger RNA vaccine candidate in the fight against Covid-19. The firm expressed an intent to use these proceeds to fund the manufacture and distribution of this candidate once there is FDA approval.

I would also guess that readers probably noticed that in an overnight deal led by Morgan Stanley (MS) , Moderna had priced 17.6 million shares of common stock at $76, raising proceeds (gross) of $1.34 billion. Does this make me rethink my decision on Monday not to take anything off of my long position in that name? Hmm, can I give you an answer after the opening bell?

The strategic alliance agreed to by Microsoft (MSFT) and FedEx (FDX) does pique my interest. The idea is to put the global logistical capabilities of FedEx together with Microsoft's leadership in artificial intelligence through the use of the Microsoft cloud for commercial customers. What this does to Amazon (AMZN) remains to be seen.

We all know that the rivalry between Microsoft and Amazon in the competition for the business cloud has been intense. We also know that Amazon's relationship with FedEx has at times been strained. This might be simple self defense. It probably does put FedEx in a far better place than it was. Just an opinion. Unrelated, but don't forget, Microsoft's "Build" developers conference kicks off this morning and runs through tomorrow (Wednesday).

Get an email alert each time I write an article for Real Money. Click the "+Follow" next to my byline to this article.
TAGS: Commodities | Drug Approvals | Economy | Indexes | Investing | Markets | Politics | Stocks | Technical Analysis | Trading | U.S. Equity | Coronavirus