In a Real Money column Friday Jim Cramer discusses First Horizon National (FHN) , the Memphis-based regional bank whose shares up 16.6% over the past 12 months. "If you don't know First Horizon, you simply aren't looking hard enough at the financials," says Cramer.

On Mad Money Bryan Jordan, chairman, president and CEO of First Horizon, says the bank has been aggressive in controlling its deposit costs, which has helped the bank's net interest margins rise when most other banks are seeing declines. Jordan said they're very excited about the IberiaBank (IBKC) acquisition.

Let's check out the charts of FHN to see if they are exciting.

In the daily bar chart of FHN, below, we can see that prices have traded higher since late May but in a very choppy sideways-to-higher manner. Pullbacks or dips since August have retraced most or all of each rally to a new high. Strong uptrends often have shallow or short-lived pullbacks as traders are anxious to push more money into the stock.

The daily On-Balance-Volume (OBV) line has moved sideways since late July. The line is not declining, which would be bearish but it also has not pushed up to a new high to confirm the new price highs with signs of more aggressive buying.

The Moving Average Convergence Divergence (MACD) oscillator has been crossing above and below the zero line since October, which tells me that this uptrend on FHN is not particularly strong.

In the weekly bar chart of FHN, below, we see a mixed picture. Prices have been in an uptrend and are above the rising 40-week moving average line but we also see a band of overhead chart resistance from $18 up to $21.

The weekly OBV line has been moving sideways since August and the MACD oscillator on this longer time frame is "flat lined" in positive territory. Not a picture of technical strength.

In this Point and Figure chart of FHN, below, the chart shows only a modest upside price target of $19. 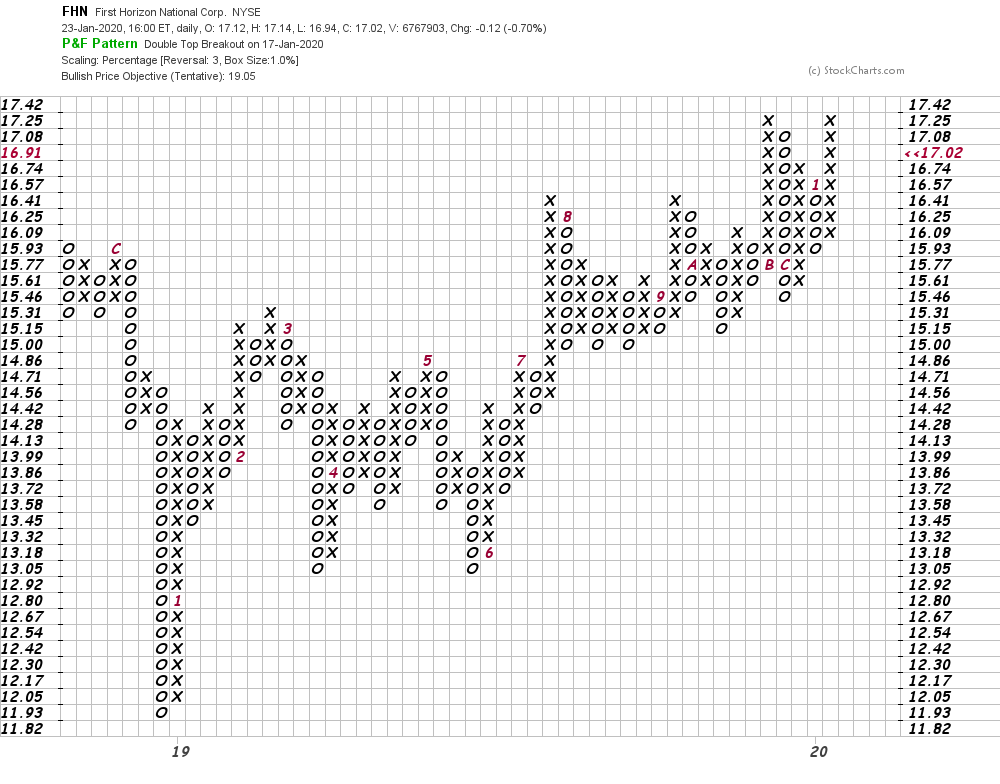 Bottom-line strategy: The fundamentals may be constructive but the charts and indicators of FHN are not particularly compelling. The long side is just OK, but traders will have to risk below $15.75 with only a $19 price target. I think there are better opportunities with other stocks now.

Get an email alert each time I write an article for Real Money. Click the "+Follow" next to my byline to this article.
TAGS: Investing | Stocks | Technical Analysis | Banking | Mad Money | Executive Interview