What that was, is hard to explain. I told my son, early on Monday morning that markets were going to get roasted "today", so buckle up, kid. This particular son, in his mid-twenties, runs his own business full-time, while showing an interest and an acumen for this business that sometimes takes me by surprise though it no longer should. He said, "You told me on Friday that "they" were going to sell Tesla (TSLA) on Monday. The market just needs to absorb that move and these headlines about the new strain of the virus. I'll check on you this afternoon." Kid's pretty smart. No excitement. No panic. Just what someone making a living doing something else should do. Decisions made for reasons. Otherwise, stay the course. He, and his kind, don't get caught up in the volatility created around headline news flow, nor are they provoked by emotion.

My son probably had no idea, beyond instinct just how right he was. (I swear this kid has more raw talent than I ever had. I had to learn from my Dad, a floor trader named Howie that you probably never heard of, and Jim Cramer who did not know I was studying him until many years later. In other words, I had to focus on the financial markets as a priority and learn from pros in order to become a pro. This kid did his own thing, still picking up quite a bit peripherally.)

Cut Travel With The UK?

Markets opened at a significant discount on Monday morning, and within an hour were trading at what would become session lows. The overnight session, where I was a participant, had been even uglier. I was already in a pretty gnarly mood by the time I saw my boy. News of a mutated form of SARS-CoV-2, the virus that causes Covd-19, had caused new shutdowns in the UK, had caused roughly 120 nations to cut travel with the UK, and would then turn up in both South Africa and Hong Kong before morning was out. So, three continents. At least. What were/are the odds that this new potential for increased misery was not already walking the streets of neighborhoods in the U.S.? Yours and mine.

New York Gov. Andew Cuomo tried to at least ask airlines servicing routes between London and New York to require Covid testing prior to boarding, while asking the federal government to join those 120 nations in temporarily shutting down travel between the U.S. and the UK. Now, I don't agree with my governor on very much, but I will not oppose him for the sake of opposing him. He's not only correct in this request, it seems like common sense. Washington. Come in Washington. Can you hear me?

They started to buy the markets off of the lows. The dollar found a bid, even as legislators here in the U.S. appeared to cooperate. Bond traders sold longer dated maturities, but both the US 10 year note and 30 year bond hit support at the same spots where support had been found all last week. Domestic equity indices had all bottomed within an hour of the opening bell. The Nasdaq Composite, down 1.8% at 10:30 ET, closed -0.1%. The S&P 500 also closed near the highs of the day, at -0.4%, while both the blue chips (DJIA), and small caps (Russell 2000) managed to avoid the color red completely. Of course the Dow 30, as an extremely narrow index, had some help, as the banks led the way in the wake of Friday's "stress test" results. Both Goldman Sachs (GS) , and JP Morgan (JPM) announced the resumption of share repurchase programs and off they went. Apple (AAPL) , Microsoft (MSFT) , and Nike (NKE) , also helped buoy the blue chips.

Not only did markets start to believe that the fiscal support/government funding would happen, but UBS released a research piece on Monday morning quoting someone at the European Molecular Biology Laboratory who felt that the new vaccines appeared to maintain efficacy against this (these) new strain(s) of the virus. Still, nine of 11 sectors closed lower. Oil was lower. Airline stocks easily underperformed broader markets. I would like to point out that both Alaska Air (ALK)  and Southwest Airlines (LUV) outperformed the Dow Jones US Airlines Index (-1.1%). Remember, here in this space, we have repeatedly written that Southwest (LUV) is the only airline that we would even consider owning (and it is our only holding in the space) during this pandemic given the domestic nature of its business.

Breadth was a little on the tough side, but not even close to awful. On Wall Street losers beat winners by a rough 3 to 2, as declining volume beat advancing volume by the same margin. However, up at Times Square though losers beat winners by about 5 to 4, advancing volume beat declining volume quite decisively, by almost 8 to 5. Trading volume in aggregate was of course off from Friday's expiration inspired levels, but markets were still active enough to make whatever we saw meaningful. Trading volume directly attributed to constituent members of the Nasdaq Composite exceeded its own 50 day SMA by about 18%, while volume directly tied to the S&P 500 exceeded the same marker by 15%. One note to make, excepting the final 20 minutes of the regular session, volumes were heavier during the morning, than in the afternoon, suggesting far more professional interest in buying yesterday's dip than there was in shaving longs near the top.

Fighting Back For Less

Who doesn't love physical exertion? Since my parents bought me a weight set at age 13 to the present, I have always made fitness part of what I do. It's like anything else. Be it investing, working one's way up the corporate ladder, or preparing one's family for the challenges that every family eventually faces. We set goals, and if we reach them we adjust. Same as with target prices. As PR's (personal records) for the mile or on the bench become impossible to match thanks to age, we try to set decade highs, then five year records, now I do post-Covid records. I became so frail and weak that those are easy. They also allow for one a natural mental boost. My max on the bench as a younger man was not exceptional, but nothing to be ashamed of. I could bench 320 back in the day, but pre-Covid, I was still working out with 225. Post-Covid, I was euphoric the first time I was able to "throw" 86 pounds up for reps.

Well, I am well past that starting point now. I also get my cardio on a spin-bike that I have in my house. I have to be a little careful because I have lasting issues with blood pressure and heart rate, but this kind of cardio is in my opinion, fantastic. No, I bought my own bike, and subscribe to an on-line service to which I follow along... as a consumer I would not pay Peloton's (PTON) prices when something comparable is so easily purchased piecemeal for a mere 20% to 30% of those prices. Not 20% to 30% less, 20% to 30% of.

That said, while I ride with competitor's equipment, I recognize that many folks enjoy the convenience that Peloton offers as well as it's community feel, which services like the one I use do not have. Obviously, these folks are willing to pay up (and wait) for what Peloton offers. That's why I have been long the shares for some time now. Finally, Peloton is doing something about meeting this demand in a more timely fashion. On Monday, we learned that Peloton would acquire fitness equipment manufacturer Precor for a cool $420 million in cash from Amer Sports in Finland. Why? Simple. Two reasons. As of the end of last quarter, Peloton had close to $2 billion in cash and marketable securities on the balance sheet. On top of that, the Precor acquisition, which will close in early 2021, will bring with it 625K square feet of manufacturing space within the U.S. Facilities exist in North Carolina and Washington, covering both coasts.

The ability to shorten wait times in order to meet demand before demand meets the competition is key here. The fact that Precor already supplies equipment to hotel chains, as well as corporate and collegiate properties will also be a plus once folks feel safe to interact. This will allow for Peloton an opportunity to cross-sell equipment at the fleet level in addition to one (upper class) household at a time. Brilliant move in my opinion. 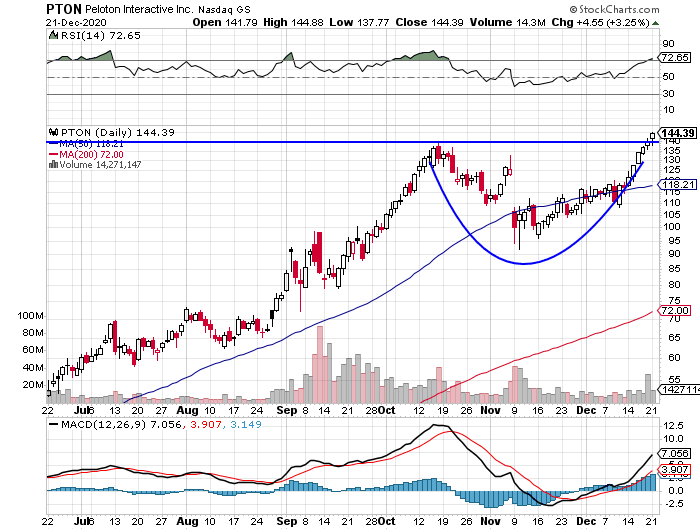 Houston, we have lift-off. Maybe. You see the cup formation that now appears to break-out above the $140 pivot. Should a handle not form, our target price is $168. However, the daily MACD is clearly extended with the 12 day EMA this far above the 26 day EMA. Is this dangerous? It does not have to be, on its own. A relative strength reading above 70 (now 72) does provoke thoughts of a handle. Even long the shares, I would prefer it. I have always trusted cups with handle patterns more than cups that do not form handles.

Just bear in mind, that if a handle does develop that the pivot will move from the peak of the left side of the cup to the peak of the right side. That in turn would create a higher (than $168) target price, not to mention that we would then also increase our panic point, which is currently an even $130.

Get an email alert each time I write an article for Real Money. Click the "+Follow" next to my byline to this article.
TAGS: Economy | Investing | Markets | Stocks | Technical Analysis | Trading | Airlines | Health Care Equipment & Services | Consumer Products | Coronavirus

The 'Meme' Strikes Back

The big question now is whether this is just some routine profit-taking after a very strong run, or is it the start of something much more severe.

Drugmakers Have No Magic Pill for Today, but They Do Inject Some Hope

Here's a play in Pfizer.