We have been bullish on the precious metal gold and several mining names for a long time, as regular readers of Kamich's Korner will know. In the past few weeks, I have received a number of emails from readers worrying about and second guessing the rally. They turn on their computer or tablet and they see gold going down $20, $30 or more in the morning and their hands sweat. They are nervous and are ready to jump ship.

Many years ago, probably in the mid-1990s, I remember reading an article by Robert Prechter, CMT -- a colleague and dear friend in the business. He was involved in a number of trading contests to show the power of using the Elliott Wave Principle. He traded options and produced some stunning results. His article was less about the approach researched by Ralph Nelson Elliott in the 1930s and more about how hard it is to mentally and emotionally stay with a big (and profitable) position.

In my long career in the industry, I have only met a few individuals who have successfully walked away with huge gains. While Bob has his admirers, he has also been criticized by the media and fundamentally oriented analysts. The reason I bring up this article is that it is really hard to stay with a long-term position.

Let's look closer at the SPDR Gold Shares ETF ( GLD) .
In this daily bar chart of GLD, below, we can see on this timeframe that prices turned higher in December. There was a pullback in March with the weakness in the broad market, but prices quickly resumed their uptrend. Prices accelerated into early August and have been correcting the advance over the past few weeks.
The nearby gold futures contract pierced the round number of $2,000 in early August and the financial media went into a mild frenzy, with many poorly written and weakly sourced stories. As a former commodities reporter for Reuters, I feel I can level that sort of criticism.

Since missing the dot.com mania top in 1999, financial journalists are quick or too quick to label any and all steep rallies as bubbles. I lived and worked through the 1970s commodity boom and experienced first hand the rise and subsequent fall of gold and silver and sugar and coffee and many other markets. Gold prices in 2020 are a long way from being in a mania, judging by my past experiences.
More charts please.
In this weekly bar chart of GLD, below, we went back just three years and can see that prices have been in an uptrend from the middle of 2018 and prices are firmly above the rising 40-week moving average line. The weekly OBV line has been rising -- and tells us that buyers of GLD have been more aggressive, with heavier volume being traded in weeks when prices have closed higher. The trend-following Moving Average Convergence Divergence (MACD) oscillator has been bullish since the beginning of 2019.

We have also shown this long-term weekly chart of GLD, below, before. We have pointed out the large base formation and told readers that large bases can produce large gains. I believe we are in the early innings of a long-term bull market.
The press coverage of gold has stayed in the B section and it has largely been bearish -- the rally is irrational, it is driven by fears of inflation that are not really there, weakness in the dollar is temporary, and on and on. Holders of gold should only worry when stories about gold are very bullish and on the front page of the Wall Street Journal, above the fold.

The Point and Figure charting methodology dates back to the 1880s in the United States and plots only defined price changes called increments, ignoring time and volume. The technique is good at identifying accumulation or buying and distribution or selling.
In this daily Point and Figure chart of GLD, below, we can see the rally going back to late 2016. The sideways consolidations within the uptrend allow for "counts" and price projections. This chart is projecting that prices could advance to the $297 area. I wonder how many traders will hang on for the ride? 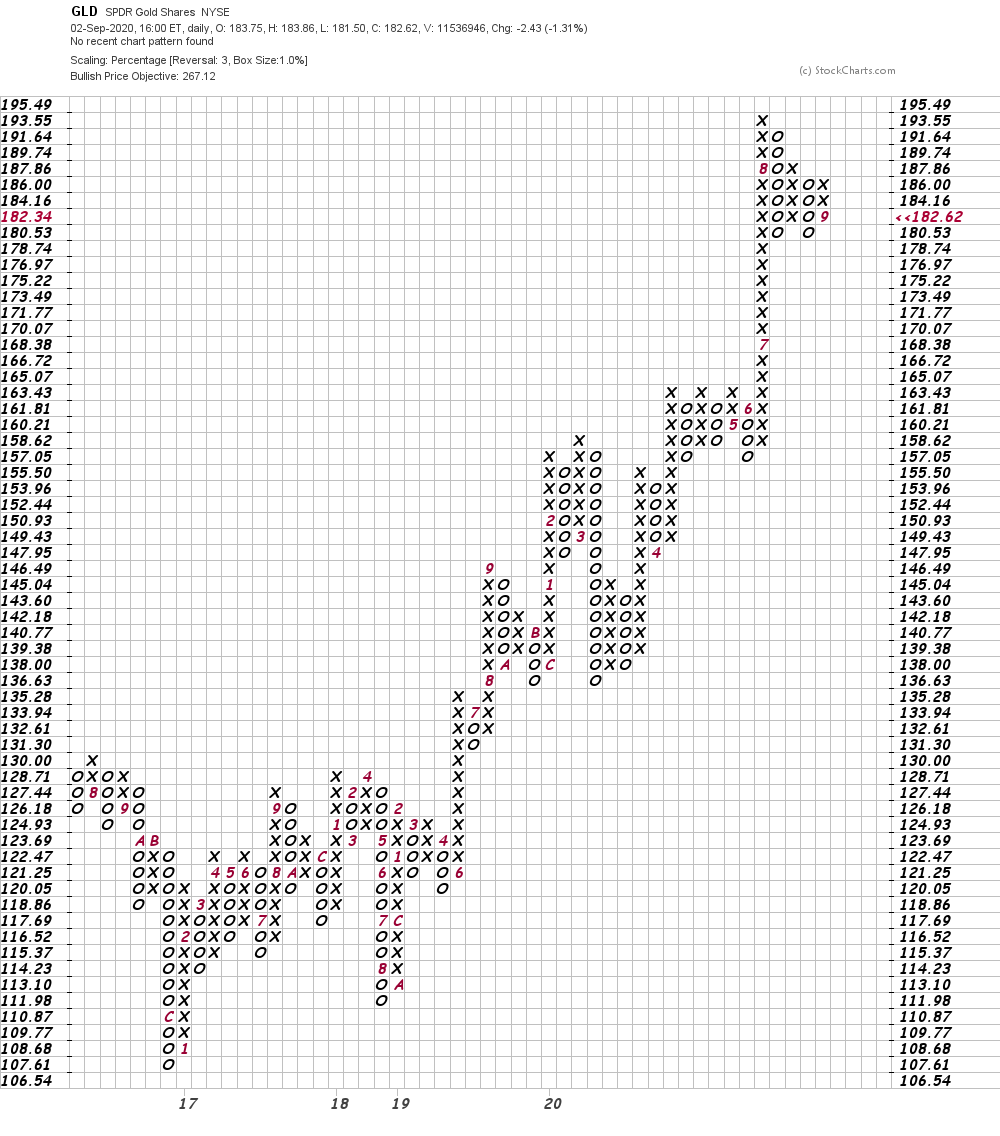 Bottom line strategy: So what am I saying or recommending? The rally in gold is in its early innings. The media coverage is largely bearish in nature. Traders are not emailing me questions about penny stocks listed in Canada. Only one of my neighbors has asked me about gold as an investment. I feel completely safe wearing my gold neckline (but I don't commute into N.Y.C. any more). I do not (yet) get unwanted emails and Facebook and LinkedIn commercials about gold and silver. We have not elevated a few bullish analysts to guru status, which happened in the late 1970s mania. History tends to repeat itself.
So count slowly to 10, exhale and have an appropriate stop loss order.
Get an email alert each time I write an article for Real Money. Click the "+Follow" next to my byline to this article.
TAGS: Gold | Investing | Technical Analysis | Metals & Mining