Jim Cramer told his Mad Money viewers Monday night that while Evergrande represents systemic and economic risks for China, he did not see the contagion spreading to U.S. soil. He said if the huge default sends the Chinese economy into recession, then it could impact companies with Chinese retail exposure like Starbucks (SBUX) .

Let's take a coffee break and look at the charts of SBUX.
In this daily bar chart of SBUX, below, we can see that prices made a high in late July and have been declining lower into September. Prices made a new low for the move down the other day but have so far bounced off the rising 200-day moving average line.
Trading volume looks like it increased into this moving average test and the On-Balance-Volume (OBV) line made a new low for the move down. In a small way this looks like some traders "threw in the towel" on their long positions.
The 12-day price momentum study made a low in August and a higher low in September. When compared to the price action of a low and lower low we have a bullish divergence - the pace of the decline slowed and that observation can foreshadow a rebound or a rally.

In this weekly Japanese candlestick chart of SBUX, below, we can see the ups and downs of trading over the past three years. Like the daily chart above we can see that prices are testing the rising 40-week moving average line.
Trading volume has been declining the past year and the OBV line has been slowly weakening since April. The MACD oscillator has been in a decline for months but is still above the zero line.

In this daily Point and Figure chart of SBUX, below, we can see that the software is projecting the $102-$101 area as a possible downside price target. It might take a rally to $121.25 to turn this chart bullish. 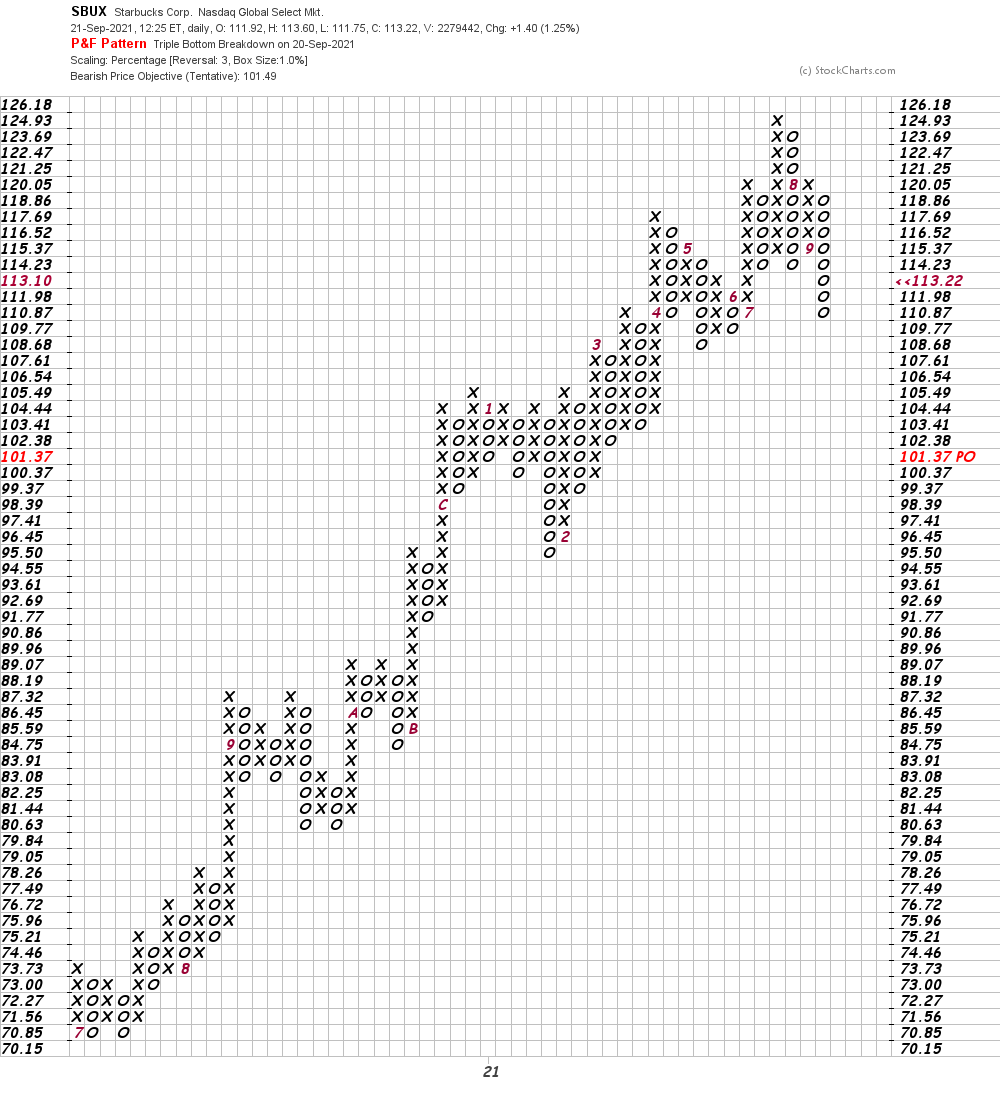 In this weekly Point and Figure chart of SBUX, below, we used close only prices and a five-box reversal filter. Here the software arrives at a $240 price target.

Bottom line strategy: The management of SBUX have proven themselves pretty capable over the long-haul so I suspect they should be able to adapt to whatever happens in China. The so far successful test of the 200-day moving average line is a real plus. Strength above $120 will also be encouraging.
Get an email alert each time I write an article for Real Money. Click the "+Follow" next to my byline to this article.
TAGS: Investing | Markets | Stocks | Technical Analysis | Trading | Food & Drink | Restaurants | China | Mad Money