Adjusted operating margin of 15.1% decreased from 19.5% a year ago. Adjustments were made for restructuring as well as transaction and integration-related expenses.

As Starbucks CFO Rachel Ruggeri let us know during the call, the firm expects to see 7% to 9% comp store sales growth in the US. The firm is expecting "outsized" comp sales growth in China for quarters two through four as the firm laps the impacts of the height of that nation's pandemic-based lockdowns. The first quarter will still be negative in China. While enduring a probable four percentage point negative impact from foreign exchange, the firm does expect to be able to expand margins next year, especially in Q3 and Q4.

At the end of it all, the firm expects to be able to deliver full year GAAP EPS growth at the high end of a range spanning from 15% to 20% for FY 2023. Adjusted EPS growth is expected to be at the low end of that same range.

Starbucks ended the quarter with a cash position of $3.183B and inventories of $2.177B. Inventories are up a bit from a year ago, but cash is down by 53.2% over that time frame. Current assets are down to $7.019B, from $9.756B 12 months back. Current liabilities are up to $9.152B from $8.151B in a year's time. This puts the firm's current ratio at 0.77, which is down from 1.19 last year. I understand why Starbucks had to use the balance sheet to get through what they got through abroad, but the rapid deterioration in the quality of this balance sheet is absolutely stunning.

Total assets add up to $27.978B, which is also down, and includes $3.44B in "goodwill" and other intangibles. At 12.3% of total assets, I have no problem with that for a public facing company. Total liabilities less equity comes to $36.677B. (Gotta love a major public corporation running an equity deficit, not.) This includes $13.112B in long-term debt.

There is no way to sugarcoat my take on this balance sheet. This balance sheet really forces the investor to slow down and think hard before allocating any capital toward this name. The firm states an intention to return $20B to shareholders over the next three years. Maybe they should use that dough to fix this balance sheet.

So far, I have found 11 sell-side analysts that are rated by TipRanks at either four or five stars (out of five) and have opined on SBUX since this report was released on Thursday night. Across the 11, there are six "buy" or buy-equivalent ratings and five "hold" or hold-equivalent ratings. One of the "holds" declined the opportunity to set a target price.

Overall, the quarter reported was better than expected, and the year ahead is seen as potentially very nice as long as China reopens in earnest. Can you count on that? I don't think so. That's the problem here. The stock has just run based on China hopes as much as anything else, and that said, Starbucks could be a tremendous brand in China. Now, if success in China remains elusive for any reason... more Covid restrictions or some kind of geopolitical backlash against American firms (I mean, we are in a Cold War, aren't we?), then that gnarly balance sheet could become a 'thing."

The company is lucky that modern day investors don't fundamentally analyze companies like they used to. The stock trades at 26 times forward looking earnings. That said, the company has now put together back to back quarters of sub 10% sales growth. So, why the high valuation? China. That's still a gamble. 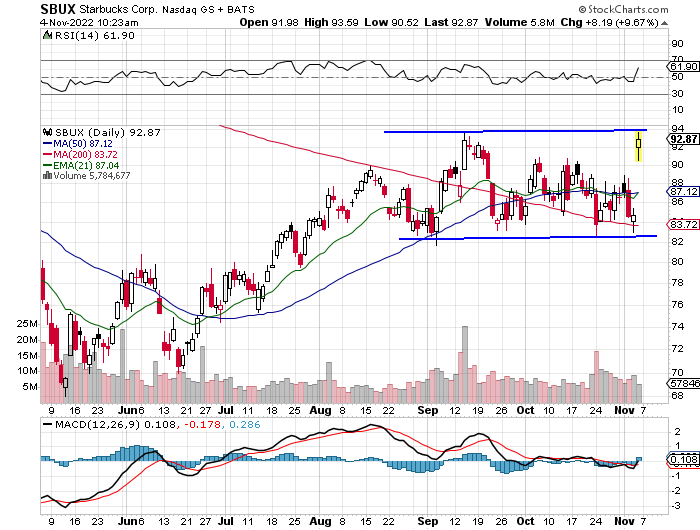 Readers will see that SBUX has run today... all the way back up where it was stopped in mid-September. Both Relative strength and the daily MACD are pretty close to being non-committal here. The crazy thing is that I was really thinking that I was writing a bullish article and would end up with a bullish trade idea as I worked my way through the information. That said, I can not unsee that balance sheet.

Note: The idea here is to make a bearish bet, while buying protection at $95 though the expiration date and subsidize the expense of purchasing that protection by selling the $85 put that caps profitability through said expiration.

Get an email alert each time I write an article for Real Money. Click the "+Follow" next to my byline to this article.
TAGS: Earnings | Investing | Stocks | Technical Analysis | Trading | Food & Staples Retail | Food & Drink | China