- Song of The Witches (excepted from "Macbeth") William Shakespeare (1606)

What a week !! The week was just full of third quarter earnings reports, but that was only part of the story. "Things" potentially changed last week. Or maybe they did not. How does one know? Can one know? This is that story. Bend knee and listen to the old one, for he has seen much. Maybe not anything like this, not for a long time anyway, but he has seen much.

The list of the many names that reported last week was headlined by the likes of those names "formerly" known as "mega-cap" stocks. Formerly, because they have had the tar (mega) kicked right out of them. Up to the plate they went, bat in hand... Alphabet (GOOGL) , Microsoft (MSFT) , Meta Platforms (META) , and Apple (AAPL) . At bat, with the lumber almost frozen upon their once massive shoulders they stood. Whether or not expectations were met mattered less. Far less than any guidance, spending, guidance on spending, and growth in key parts of their various businesses. One by one, these mighty names finally swung and these mighty names missed badly. Back to the dugout, bat in hand they went, head hung low, and dejected they went as investors, traders and algorithms, especially algorithms obliterated once awe-inspiring if not intimidating stock prices and market caps.

Until it is, that the world's greatest consumer electronics company of all-time... Apple stepped up to bat. Finally, a champion worthy of this moment. The results were better than feared. Moderately decent in fact. The guidance was, well you all know that Apple doesn't provide actual guidance. Not since the start of the pandemic anyway. They hinted, and the hinting was enough to push the stock more than 7.5% higher on just Friday alone. The rest of the market partied along with Apple, and the marketplace, quite broadly roared as shorts were squeezed, children played, birds sang and the sun warmed all net-long souls from above.

It was not just Apple though. There was a general feeling that perhaps the Federal Reserve (boo, hiss) might not pivot, but signal that their sheer aggression this year might abate in the medium-term future. The idea is not stupid or crazy. While consumer level inflation is yet to truly cool, we do see the Reaper. We know that hardship beckons. The Reserve Bank of Australia has already cooled its jets even if just a bit, as has the Bank of Canada. Even Christine Lagarde, while raising the benchmark rate by 75 basis points in the EMU, mentioned that the ECB might (read that: will be) be sensitive to economic weakness going forward. Even in the face of high inflation.

You all know that good news is bad news and vice versa in this environment. Last week had presented as a generally poor week from a domestic macroeconomic perspective, until the BEA put a GDP print of 2.6% to the tape for its first estimate for Q3 economic growth. Growth that beat expectations and ended the "mild" recession of H1 2022. Huzzah !!

Just one thing... Almost all of that growth was due to an improved trade balance. That means that domestic demand was weaker, much weaker than we would like to see. To be fair, because I do refer to H1 as recessionary, back in Q1, when GDP printed at -1.6%, that was also largely due to the trade balance, and when Q2 printed at -0.6%, yes that was a mild "recession."

What this means though is that if one was on the other side of the debate, and "poo-pooed" the economic contraction over the first half of the year for technical reasons, then that individual must also recognize the very lack of actual economic growth portrayed in last week's Q3 GDP report. The deal is this. The economy outside of trade balances has been stagnant. Very stagnant. In fact, sans those trade balances, GDP estimates for each quarter this year to date would be within half a percentage point (seasonally adjusted and annualized) of the zero bound.

Remember that "tradeable" bottom for US markets that we spoke of as having occurred on October 13th and having been confirmed on Friday October 21st? Turns out that our confirmation was a whole lot more than mere malarkey, and the net long crowd made out very well last week. Last week's dance of the joyful, was almost as technical as it was seasonal. But really, it was more about the Fed than anything else as a perception that there could be a slowdown in aggression permeated our marketplace and thank the heavens, that crew was already into their pre-decision blackout period, and thus forced to keep their traps shut.

Then, there is the Philadelphia Semiconductor Index, which we always keep an eye on as this group is the engine of both the economy and at times, the markets... This index popped an energetic 3.98% on Friday and ran 4.15% for the week. It was not "tech" that had a poor week, as many in the media insinuated over the weekend. It was really just those once known as "mega-caps." The Dow Jones US Software Index gained ground as well.

All 11 of the S&P sector-select SPDR ETFs shaded green on Friday, and 10 of the 11 funds also ended in the green for the week. The Industrials (XLI) , Utilities (XLU) , Financials (XLF) , and REITs (XLRE) all charged ahead for more than 6% on the week as bond traders bought longer dated Treasury yields down. The downside of that is that the US 10 year/3 month yield inverted and did so deeply last week.

This spread is the most accurate predictor we have in regard to economic contraction and could (opinion: probably will) foretell coming economic hardship. I told you, we can see the Reaper. Only Consumer Services (XLC) closed down for the week, and that's because the Dow Jones US Internet Index took a beating of more than 7% over five days, despite rallying for 3.3% on Friday.

Actually, there are two that stand out. One is easy to see. Trading volume ebbed on Friday, and that does make the broad rally that most of us enjoyed less meaningful. Winners beat losers at the NYSE by more than 3 to 1 and by more than 2 to 1 at the Nasdaq Market Site, while advancing volume captured a 68.2% and 66.5% share of the action for names listed at those respective exchanges. However, trading volume was down small for names listed at both from Thursday, which was a "down" day. This conveys some professional hesitation that was missing during the Friday prior when our change in trend (at least for now) was confirmed.

Secondly, note where the S&P 500 hit resistance on Friday... 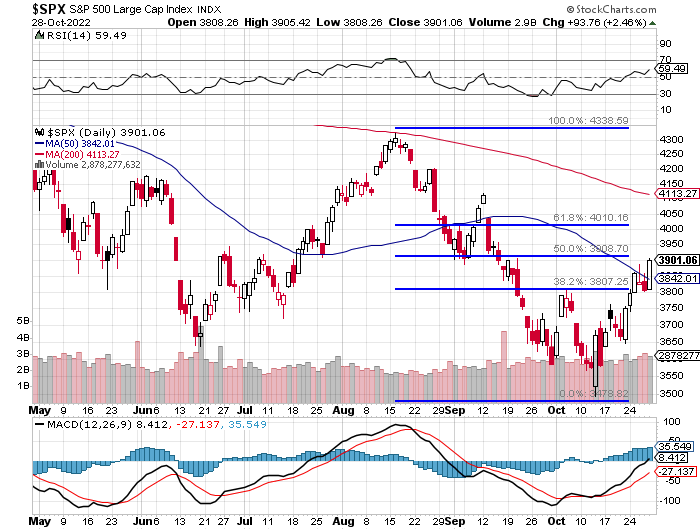 The highs from Friday appear to land at almost a precise 50% retracement of the mid-August through mid-October selloff, meaning that this index has now taken back half of what it had lost over those two months. Just remember that 50% retracements are provided on most charting software programs, but are not true Fibonacci levels.

Our favorite twelfth century Italian mathematician did not use 50% retracements in his models. Does this invalidate or cement this retracement level as resistance? Do the "kids" writing these algorithms even know that? If they do not, then there is a good chance that this level will be respected as if valid, as it would have been erroneously validated by modern technology.

This week will be another busy week for earnings, but more so, a week that will be split in half... dominated at first by the FOMC policy decision and press conference on Wednesday and then the October Employment survey data that will be released by the BLS this Friday.

At last glance, futures markets trading in Chicago are pricing in "just" an 89% probability for a 75 basis point increase to be made to the target range for the Fed Funds Rate this Wednesday, with an 11% probability for just a 50 bps increase. This is up, though from an 80/20 split late last week.

Looking further out, there is now a likelihood by plurality for another 50 bps rate hike on December 14th, but for a terminal rate of 5% that will be reached in February and flatline for most of 2023. The terminal rate of 5.25% reached in May is gone this morning. This Friday, the data on job creation, wages and participation will impact the FOMC outlook on the December meeting as much as anything else. Basically, we could see a surge in both volatility and trading volume over the final three days of this work week.

So far, 52% of the S&P 500 have now reported. According to FactSet, 71% of S&P 500 companies have reported earnings beats, while 68% have reported revenue beats. The blended (results & expectations) rate of year over year earnings growth is up to 2.2% from 1.5% a week ago for this quarter after having started the season at 3.8%. The blended rate of revenue growth is now up to 9.3% from 8.5% last week. This brings expectations for the full calendar year 2022 to earnings growth of 6.1% (down from 6.7% a week ago) on revenue growth of 10.4%, which has been constant.

And the Raven, never flitting, still is sitting, still is sitting
On the pallid bust of Pallas just above my chamber door;
And his eyes have all the seeming of a demon's that is dreaming,
And the lamp-light o'er him streaming throws his shadow on the floor;
And my soul from out that shadow that lies floating on the floor
Shall be lifted - nevermore!

Have a nice Halloween, gang.

(GOOGL, MSFT, and AAPL are holdings in the Action Alerts PLUS member club. Want to be alerted before AAP buys or sells these stocks? Learn more now.)

Get an email alert each time I write an article for Real Money. Click the "+Follow" next to my byline to this article.
TAGS: Earnings | Economic Data | Economy | Federal Reserve | Interest Rates | Investing | Markets | Rates and Bonds | Stocks | Technical Analysis | Trading