It's hip to be Square? Well, it might be.

On Sunday, Square (SQ) made a whole lot of news. First, the firm announced that it had agreed to buy Afterpay (AFTPF) ,  an Australian "buy now, pay later" payments platform for $29 billion in stock. Square also pre-released the firm's second quarter financial performance with that news. The earnings had not been expected until later this week.

The target's shareholders will receive a fixed exchange ratio of 0.375 shares of Square Class A common stock for each ordinary share of Afterpay. Square may elect to pay 1% of total consideration in cash. The implied transaction value of $29 billion, works out to A$126.21 per share which is a 30.6% premium to where Afterpay had been trading in Australian markets.

Once on board, Afterpay's "buy now, pay later" capability will be integrated into Square's existing "Seller" and "Cash App" ecosystems. The deal, which is expected to close in 2022, will leave Afterpay shareholders with an aggregate 18.5% stake in Square. This deal should improve the bottom line from year one, according to Square, and when all is considered... it may be a negative for PayPal (PYPL) , and may help propel Square into closer competition with the legacy money center mega-banks.

Traders may want to keep an eye on Affirm Holdings (AFRM) , a nearly $15 billion firm with it's own "buy now, pay later" platform. This could lead to new interest in that name.

For the firm's second quarter, Square posted adjusted EPS of $0.66, and GAAP EPS of $0.40. By both metrics, profitability easily beat expectations, and on a GAAP basis, came as an outright surprise. Revenue generated for the quarter soared 143.8% year over year, yet disappointed Wal Street at $4.68 billion. Excluding Bitcoin net revenue amounted to just $1.92 billion, which was good for 26.4% growth q/q, and 87% growth y/y.

The Cash App reached 40 million monthly transacting active customers in June, while generating $3.33 billion in revenue for the three month period, up 177% year over year, but down from $4.04 billion(-17.5%) sequentially. $2.72 billion of this $3.33 billion was generated by Bitcoin, which while up roughly three times from a year ago, was down from Q1.

Current assets dwarf current liabilities, basically on the back of a cash, cash equivalents, and short-term investments balance that totals a rough $5.6 billion. This is up dramatically over six months. Long-term debt, though not current, is by far the firm's largest liability at $4.841 billion, and up almost $2.3 billion over the past six months. Does this raise eyebrows? Not with such a large cash position. The balance sheet is in fine shape.

Square expects to see Seller show strong gross profit growth on an annual basis for July with gross payment volume (GPV) expected to rise more than 45% during that month. The firm also expects to see a two year CAGR up 25% for Q3, up from 22% for Q2.

The Cash App is expected to show positive gross profit growth while lapping strong growth from the comparable period for the year prior, while also showing strong growth on a two year CAGR basis.

As for the full year, Square expects two year growth rates to reflect underlying trends for each of the firm's ecosystems. The year over year comparison for the third quarter should be easier for Seller than for the Cash App.

The firm also sees product development, sales and marketing (and general & administrative) expenses to increase in aggregate by a rough $150 million for Q3 over Q1, and by $1.1 billion to $1.2 billion for FY 2021 over FY 2020.

There is no doubt that Square is executing well, and hitting as close to "on all cylinders" as possible. That said, I am not all that crazy about such a reliance upon Bitcoin for performance. That could be, and has been great from the firm. It could also create impossible comparisons going forward due to volatility both in cryptocurrency market prices, but also in extreme changes in trading volume in those markets. 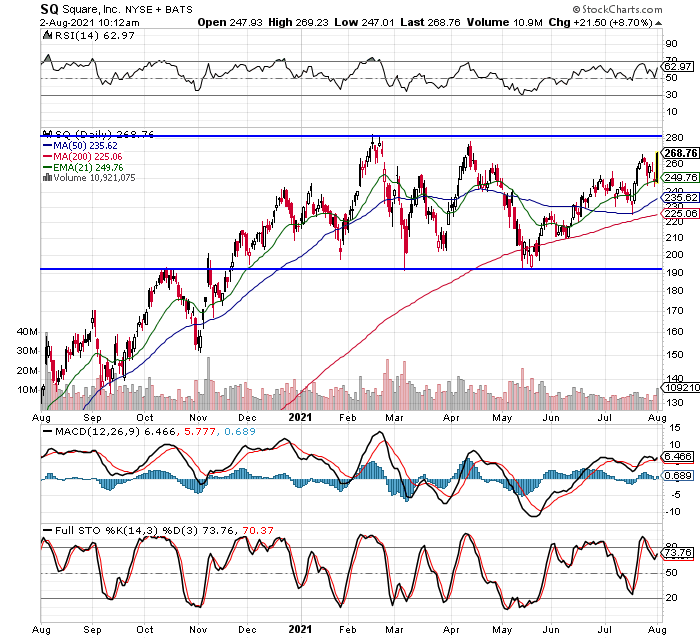 Almost saw a "cup with a handle" pattern that stretches from April through July. I think however that this is all just part of an extension of a rather broad ($90) basing pattern that goes back to late 2020. If I am right, that means that SQ is just about $15 away from hitting resistance. That said, the $283 spot is indeed a pivot point.

I am flat this name, but I think I would rather get long an August 20th SQ $280/$295 bull call spread for a net debit of $3.75 than purchase the actual equity up this much in one day and this close to postnatal resistance. You could always write a like amount of August 20th SQ $250 puts, if one is not afraid of equity risk at a discount in order to pay for the entire outlay.

(PayPal is a holding in Jim Cramer's Action Alerts PLUS member club. Want to be alerted before Jim Cramer buys or sells PYPL? Learn more now.)

Get an email alert each time I write an article for Real Money. Click the "+Follow" next to my byline to this article.
TAGS: Mergers and Acquisitions | Earnings | Investing | Markets | Stocks | Technical Analysis | Trading | Financial Services | Fintech