In his "Homework" segment of Mad Money Tuesday night, Jim Cramer followed up on a stock that stumped him during earlier shows. The first was Mind Medicine (MNMD) , a small biotech studying psychedelic medicines to treat addiction and mental illness.

It may seem counterintuitive to treat anxiety, ADHD and addiction with mind-altering substances, but it turns out, there is science behind it. Cramer said there is a long line of medicines that seemed crazy at first, but proved to be winners over time. Micro-dosing psychedelics could be next.

Cramer cautioned that MindMed is a very small company that is thinly traded. That makes it highly speculative. But he endorsed buying MindMed for speculation, if you're prepared to lose your investment if the science doesn't ultimately pan out.

Let's check out the charts of MNMD.

In this daily bar chart of MNMD, below, we can see that this was a "penny stock" until prices surged in December. MNMD went from $.50 to $5.00 in a few weeks. After the attention grabbing rally prices have traded sideways. A gap higher and another push up can be seen in April. MNMD is now trading above the rising 50-day moving average line and above the rising 200-day line.

Trading volume has been heavier since late April and the On-Balance-Volume (OBV) line has turned upwards. A rising OBV line tells us that buyers of MNMD are now more aggressive. The Moving Average Convergence Divergence (MACD) oscillator is in a bullish alignment above the zero line.

In this weekly Japanese candlestick chart of MNMD, below, we can see some positive clues. Prices made a large base pattern before prices surged in late 2020. MNMD is trading above the rising 40-week moving average line.

The weekly OBV line shows a rise from August to confirm the price gains. The MACD oscillator is making a new outright buy signal. Declines below $2.50 have been rejected.

In this daily Point and Figure chart of MNMD, below, we can see a potential price target in the $11.25 area. 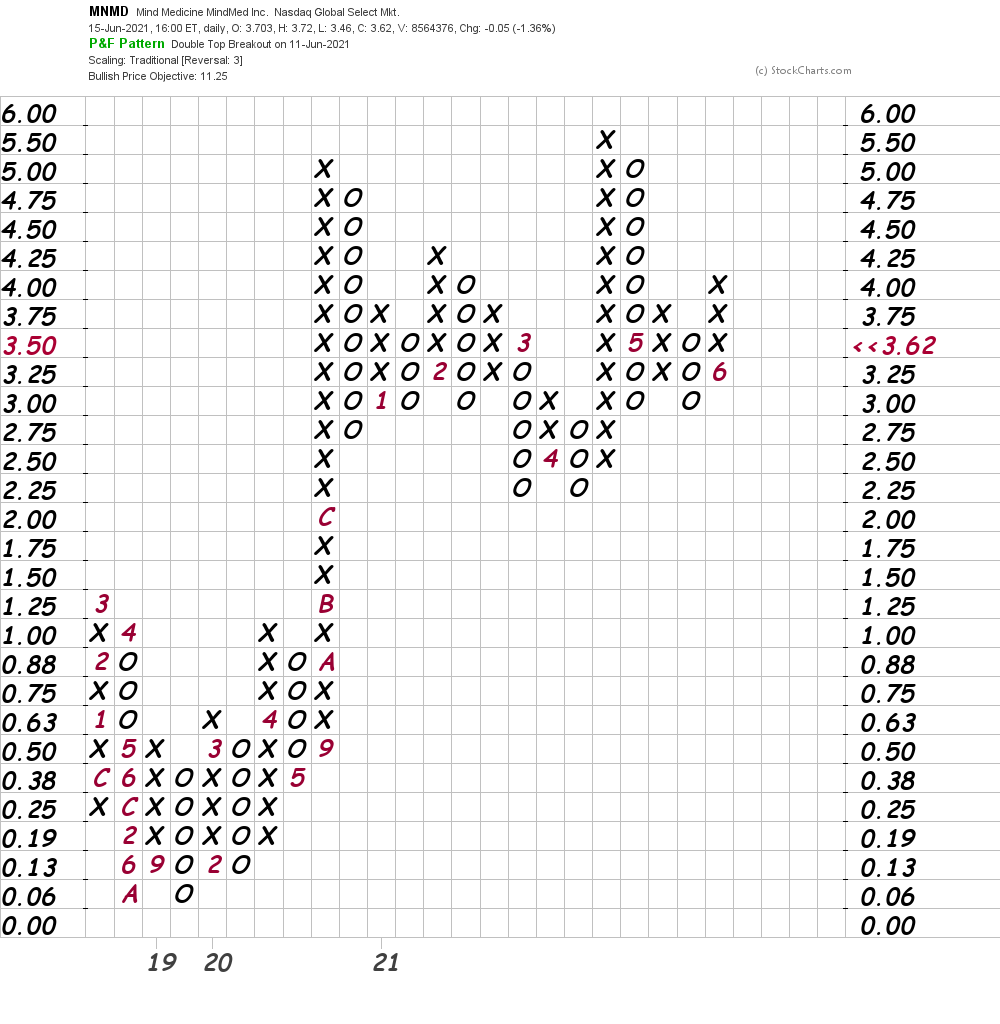 Bottom line strategy: I personally know someone who greatly benefited from this treatment so I have a positive bias when I look at the charts. Keeping that in mind I would approach MNMD from the long side around $3.50 risking to $2.00. The target is $11.25 for now. This recommendation is not for the shy, timid, or new trader.

Get an email alert each time I write an article for Real Money. Click the "+Follow" next to my byline to this article.
TAGS: Investing | Stocks | Technical Analysis | Trading | Biotechnology | Healthcare | Pharmaceuticals | Mad Money