"The mind is not a vessel to be filled, but a fire to be kindled."

"The truth of the matter is that you always know the right thing to do. The hard part is doing it."

"If you're not sure, what would your mother think if she could see you now?"

I scan Tuesday and though I see a lot, I also see so little. I see an equity landscape that traded sideways to lower on increased trading volume for a change. Still light trading volume to be sure, but more than we had seen for a few sessions. Large-caps were what went sideways. The key Nasdaq indices truly went nowhere... the Composite down 0.03%, the 100 actually green at up 0.12%, which makes sense as capital did not exactly flow, but more like seeped into the semiconductor and software spaces. Mid-caps were hit harder than large-caps and small-caps harder than mid-caps. Both the Russell 2000 and the S&P 600 closed on Tuesday below their respective 21 day EMAs and 50 day SMAs, but not by much. That game remains afoot.

The sector performance tables were a mess on Tuesday with no discernable theme or easy to read (un) rotation in place. Instead what was easy to read was that money continues to flow into both physical and paper gold. Not like we didn't see this one coming from a long way off. Capital is also flowing, quite aggressively back into the longer end of the Treasury yield curve. Readers will note that the U.S. Ten Year Note (actually selling off a little overnight, giving up more than 1.57%) paid less than 1.56% at one point late on Tuesday.

Readers will readily see that U.S. ten year paper went to bed testing stubborn resistance that had passed several retests through April and May. (Note for the new kids... when looking at yields, what looks like a rally is really a sell-off, and what looks like support is really resistance.) As longer dated yields have come in, obviously this has brought in the VIX...

As well as CBOE Put/Call ratios...

So, as we can see , our most focused upon gauges of fear, or expected volatility have reacted less to equity performance and far more to what we see in sovereign debt markets.

Federal Reserve Bank Vice Chair Richard Clarida reiterated his belief on Yahoo Finance on Tuesday that the current spike in consumer level inflation is being driven by temporary factors, and that view has been espoused often by various members of the FOMC in recent weeks. Clarida also said this... "There will come a time in upcoming meetings, we'll be at the point where we can begin to discuss scaling back the pace of asset purchases... It's going to depend on the flow of data that we get."

On that, I have said it many times, and I will say it again. Stop buying Mortgage Backed Securities, and do it three months ago. I mean, gee whiz, what does it take? A thunderbolt from the sky? New Home Sales miss, Existing Home Sales miss, Housing Starts miss, while U.S. home prices gap ever higher every month. The Case-Shiller HPI (Home Price index) just posted the largest year over year acceleration in prices since 2005. The FHFA HPI has not posted a month over month increase of less than 1% since May of 2020. Obviously, housing demand has for now dwarfed supplies of all homes, new and existing, all while builders are certainly having problems acquiring building supplies that have become both scarce and more expensive as has their pool of available talent (aka: labor market supply).

For crying out loud... let mortgages trade on their own for a couple of months. There is absolutely no good reason to still be supporting that market and there has not been for quite some time. You could cut monthly balance sheet expansion by a third without touching the rest of the economy. We have a term for this in the military... "Too Easy."

Now For the "Bad" News

While the VIX and our most focused upon Put/Call ratios seem to have started behaving themselves, I caught onto an interesting story at Bloomberg News on Tuesday. Short interest in the SPDR S&P 500 ETF (SPY) has reached 4.8% according to the piece at Bloomberg that sourced IHS Markit Ltd. (I think I have probably "sourced" this correctly. Point is, this isn't my work, but I thought you should know.)

Quoted in the piece is Tobias Levkovich of Citigroup (C) who said in a report released last Friday... that indicators are still in "euphoria territory." Levkovich states that this is generating a "100% historical probability of down markets in the next 12 months at current levels."

Question? Does historical probability mean anything when there is no similarly comparable fiscal and/or monetary environment to speak of this far into (not in time, but in distance) a still accelerating economic recovery? I am asking, because I don't know. Neither do you, and neither do "they."

Last Friday, when I wrote to you at Real Money that I would be day trading Palo Alto Networks (PANW) in the wake of that stock's robust response to quarterly earnings, and that I would be adding to my long position in Zscaler (ZS) ahead of Tuesday (last) night's numbers? Did you listen? Well, did you?

Zscaler reported fiscal third quarter adjusted EPS of $0.15 on Tuesday night, more than doubling expectations on revenue generation of $176.4 million, which was not only a beat but growth of 59.6%. This was Zscaler's third consecutive quarter posting revenue growth of 52% or greater. 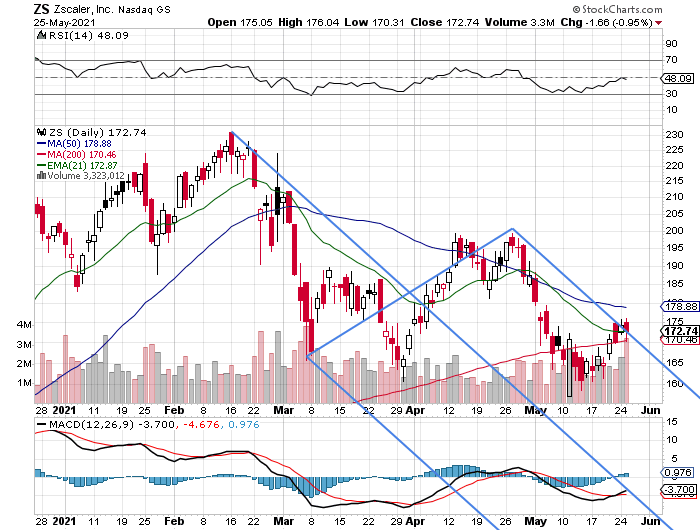 The stock had started to break out of a still forming downward sloping Pitchfork ahead of earnings, while retaking its own 200 day SMA. and flirting with its 21 day EMA. The shares are trading with a $191 handle overnight, which is wonderful, but being a realist, I would expect to see some profit taking as North America awakens for the day.

I would expect to at least take profits on the trading portion of my current long (what I have added since PANW reported) and leave the core position alone. As I reduce ZS to core size, I will also cover part of the small PANW short that I had left in place as a hedge. The need for that posturing no longer exists. I would think that after this morning's opening gap higher is created that the shares will at some point have to try to fill that gap. This will be where the 50 day SMA, currently $178, comes in. That line needs to be held in order to bring all of the portfolio managers who don't read Real Money of Market Recon on board. I may leave just a portion of that PANW short on my book as that name also has a gap to fill.

(Join us on May 26th for Real Talk, a special Real Money webinar featuring reopening portfolio picks from Chris Versace, Stephen "Sarge" Guilfoyle and Ed Ponsi. Sign up for the webinar to see them discuss and debate their portfolios.)

Get an email alert each time I write an article for Real Money. Click the "+Follow" next to my byline to this article.
TAGS: Economic Data | Federal Reserve | Investing | Markets | Mortgage Backed Securities | Small Cap | Stocks | Technical Analysis | Trading