By definition, the term "optimism" is described as a mental attitude reflective of the possibility, or belief that an outcome or outcomes will be favorable. My opinion? Optimism may just be the most useful weapon in our arsenal as a people. We stay on task, we stay highly motivated in our individual roles, we stay truly dedicated... to our nation, and each other, we can win. We will win. A short struggle? We can. A long struggle? We still can. The impossible? No such thing.

Third down. Not looking good. Deep in our end, needing 10 yards. Quarterback drops back, nobody open. Waiting... waiting... receivers still covered. Oh... hit from the blindside. Fourth and long from inside the five.

Sunday. You good, Dad? "Remember (old golfing pal) downstairs? Virus just got him." Oh, jeeze. You good though? You got everything? "I'm good." How 'bout Ma? "Mom's a trooper, She's fine." You guys sure? You got food? "We're fine." How about (Uncle & Aunt)? "Just talked to him. They're still kicking." Okay, stay close. Thank you, Dad.

I love being Irish, I really do. Only bad thing about being Irish is nobody ever admits that they aren't okay, or might have a single doubt in the back of their mind. It's the way we are built. I have to take my Dad's word for it, even though I know that I would never admit anything that would make him worry either.

Then, the mood shifted. There was some good news. Despite hearing that the Prime Minister was headed to the hospital in the UK. Elsewhere. As I lifted what weights I do have in my garage (Funny, a little bit heavier than I remember them.)... the onslaught of persistent death seems to maybe slow down in both Italy and Spain. The rate of spread appears to slow in the U.S. Product of testing? I don't know. New York Gov. Andrew Cuomo did report more Covid-19 discharges from state hospitals than there were Covid-19 admissions. A net positive for total hospital beds available? Hmm.

The presidential task force was not going to address the media on Sunday. Then, they changed their mind. There must be actual news? Futures markets opened ahead of that press conference. In the green, and went higher. That's interesting.

Vice President Mike Pence mentioned "glimmers of progress." The president himself spoke of getting past the very worst part of the curve that we have all been watching. This came after St. Louis Fed Pres. James Bullard sounded quite pragmatic earlier in the day, and far less negative than anyone had in a couple of weeks in describing both the U.S. economy as well as labor markets.

Perhaps, the star of the whole shift toward a more optimistic tone has been U.S. Navy Rear Admiral John Polowczyk (Quartermaster Extraordinaire?) who exudes confidence and competence when addressing issues related to logistics. Clearly, at least in my opinion, this guy has gotten the ball moving. Maybe, just maybe, on fourth down, our punter surprised everyone and ran with the ball. Still... a long way from the end zone, but a first down and 10 just when our team needed one.

What To Think About

For one, this is a short week, as financial markets will be closed for Good Friday. Investors and economists alike witnessed in detail the shortcomings of monthly survey-based economic data in a modern, 24/7 news cycle last Friday, as the Bureau of Labor Statistics printed job "creation" of -701K positions, when everyone knows a rough 10 million (or more) individuals lost their jobs over the final two weeks of March.

The macro is now, not useless for analytical use down the road, but certainly is of no help in ascertaining a real-time understanding of the real-world conditions that Average Joe, Average Jane, and their employers must live in. As for the small business person, owner, I told you of an acquaintance that had put off laying off his staff until last Friday to see just how easy or difficult it would be to access the funds made available through the CARES Act. Well, my friend has put that decision off until sometime this week. He is trying to hang on, but the system is severely overburdened, and he has questions that no one seems able to answer for him.

FactSet revised (as they do weekly) their aggregation of earnings related opinion going into the "season." Just a heads up, this week will be quiet, but the big banks go to bat next week. This season, the first of probably at least two that will be awful is nearly upon us. How to value stocks at a time where the only thing more useless than past performance is forward guidance? I don't know. That is the question. How deep will this recession get? How long will it last? Which industries will recover quite well. What industries might not recover at all? Oh, there certainly are candidates. Then, what of Phase Four. We all know that after sustenance will come actual stimulus. An infrastructure rebuild sure would put a lot of folks back to work... but, how far can the nation push the creation of new money supply, with little in the way of revenue? When can people actually work? Not until the virus is no longer in control would be the quick answer.

Since, I did bring it up, according to FactSet, industry consensus for S&P 500 Q1 earnings is for "growth" of -7.3%, for Q2... -15.1%... and for Q3... -4.8%. Then some weak growth actually returns for Q4. Right now the S&P 500 trades (if you can believe the guidance) at 15.3 times next 12 months' earnings, well below the five year average of 16.7 times. Of course, so many prices have been warped or skewed in this environment, not to mention expectations that this 15.3 times, includes both a Financial sector trading just above 9 times and an Energy sector that even at these severely depressed levels, at an absurd 55 times next year's earnings.

At first, it was thought that OPEC and OPEC allied oil producers would hold a virtual emergency meeting on Monday (today) after President Trump had reached out to both Russian President Vladimir Putin, and Saudi Crown Prince Mohammed bin Salman in an effort to get the feuding nations to end their ill-timed price war. The two sides seemed to trade barbs over the weekend. The Monday meeting was postponed until Thursday. Both Brent and WTI Crude traded off significantly on Sunday night as futures markets opened.

Fast forward. Monday morning, crude still trades lower than it had on Friday, but well, well off of the lows. President Trump has been rumored to threaten the use of tariffs on imported oil as a weapon, as well as removal of U.S. military protection for the Saudi Kingdom if an agreement can not be reached. Alas... now Kirill Dmitriev, who is CEO of Russian Sovereign Wealth Fund RDIF, has been quoted as saying the two sides were "very close" to an agreement to cut production, but were also working with American authorities to have U.S. producers participate in the reduction. To be continued... Watch Exxon Mobil (XOM) and Chevron (CVX) as leading indicators.

Chart Of The Day 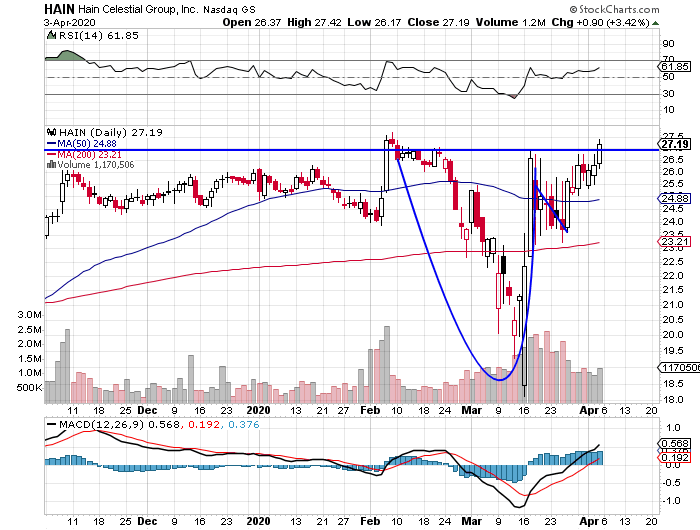 Not that I have watched all that closely Hain Celestial (HAIN) , a producer and distributor of natural/organic foods as well as personal care products. What I do watch for closely, in particular on Sunday nights, is for possibly technical breakouts that I might have missed in real-time the week prior. I have not yet decided if technical analysis takes on a greater role right now as traditional fundamental analysis has been pushed aside due to necessary government intervention in economic activity, but there may be something here.

Over just a month's time, HAIN has sold off deeply, only to fully recover, then sell off half as deeply, and fully recover again. Whole ball of wax? A cup with handle pattern two months in the making... that is the shares can break out above this $27 pivot, could in my opinion run as far as $32, or $33. What's five bucks, you say? That's 20% just after your portfolio took a crowbar to the knee-cap I say. It's an idea. I may try it myself after publication. Panic point of $25, just to keep a lid on the risk.

- The LinkedIn unit of Mircosoft (MSFT) will speak at the "Voice of the Car" virtual summit to be held over April 7th - April 8th.

(Facebook, Costco and Microsoft are holdings in Jim Cramer's Action Alerts PLUS member club. Want to be alerted before Jim Cramer buys or sells these stock? Learn more now.)

Get an email alert each time I write an article for Real Money. Click the "+Follow" next to my byline to this article.
TAGS: Earnings | Economy | Investing | Markets | Oil | Stocks | Technical Analysis | Trading | Coronavirus

3 Key Things to Look for When Buying Dividend Stocks

For income investors looking for their next dividend stock, these considerations should be a part of the selection process.

I Would 'Bet' on Wynn Resorts Continuing Its Rally