Almost as if there was never a doubt. The nation comes back from its late summer yawn, which felt like the oddest of low-volume rallies, and suddenly it all matters. Of course, Tuesday was just one day, and a day that the Nasdaq Composite not only closed in the green, but made yet another all-time intraday high at that... but it did feel different. That pressure, if it is real, has rattled around the planet on Wednesday morning, and is being reflected here at home as major U.S. equity index futures are indeed trading lower. That said, US Treasuries dated from five years out to 30 do seem to have made a stand at around 02:00 am ET and have rebounded off of their lows as the shorter end of that curve has not budged, slightly compressing spreads as we head into the later "wee" hours ahead of what most traders consider to be "pre-opening" trade.

There is something different in the air, though. As Helene Meisler pointed out in her piece on Tuesday evening, rising yields out on the longer end of that curve, at least for the moment, do not seem to be helping the banks. Nor do rising yields appear to be putting pressure on mega-cap growth stocks. As the US Ten Year paid as little as 1.326% on Monday night and as much as 1.38% mid-day on Tuesday, the KBW Bank Index gave up 0.3%, while the KBW Regional Banking Index, supposedly representative of banks more reliant upon traditional banking means as a driver of revenues, spit up 0.6% for the session. This as Apple (AAPL) , Amazon (AMZN) , Alphabet (GOOGL) , Tesla (TSLA) , and Facebook (FB) all rallied. Extending the group... Netflix (NFLX) rallied, but is not really in the same market-cap class as the rest of this group, while Microsoft (MSFT) certainly belongs but did not rally.

As for the complexion of Tuesday's trade, small to mid-caps stocks came under more pressure than did large-caps. Eight of 11 sectors closed in the red, with both of our "growthy" sectors among the three that closed in the green, but the cellar dwellers were a true mix of defensive and cyclicals as actual doubt or perhaps profit taking spread across the marketplace. Losers beat winners by more than two to one at the NYSE, as declining volume edged advancing volume on significantly increased aggregate trading volume. Up at the Nasdaq market site, losers did beat winners a rough 8 to 5, but advancing and declining volume were evenly split. Aggregate trading volume here also noticeably increased.

Simple. I think. Markets may be waking up to the fact that economic growth is slowing sharply, and doing so before the "transitory" part of our transitory consumer level inflation proves out. What this does, and this is happening globally, not just here in the U.S., is force central bankers to consider moving ahead with tapering their asset purchase programs with or without the "overheating" economy that one would prefer to see as a factor in creating this inflation. Instead, an economy that has become addicted to fiscal stimulus begs for more (and quite honestly will probably get something) leaving central banks in the position of likely having to choose between extending monetary policy well past what many consider responsible, or preparing now for what comes next.

It can not be lost on investors that as sovereign debt yields wake up, US dollar valuations appear to be waking up alongside, and real yields for European junk rated debt have largely gone negative versus the rate of consumer level inflation on the continent. All as the ECB heads into tomorrow's (Thursday's) policy decision.

In the U.S., we now know that labor markets have slowed significantly, as we expect a surge in supplies of available labor at lower wages. We had thought that Labor Day weekend would signal a "back to school" moment for Wall Street itself, and more broadly for the U.S. economy. Instead, the spread of COVID's latest and scariest variants continue to warp economies across the planet, preventing commerce from functioning more normally. Kinks in supply chains have left many grocers and broadline retailers looking as they did a year and a half ago with empty shelves emitting an apocalyptic aura that one feels when running family errands. This of course provokes within the consumer both an urge to save, as well as an urge to hoard. Businesses are pushing back dates for white collar employees to return to the office, while many school districts are already changing direction on "in person" learning. To top it all off, the University of Michigan... on the same day that Jerome Powell gave his "virtual" Jackson Hole address, reported Consumer Sentiment at 70.3. By the way, (and I researched this at 03:30 am, so I think it's correct) that 70.3 is the most pessimistic reading for that series since December 2011. That's just short of ten years, gang, and brings us all the way back to the last financial crisis, one where all we had to protect ourselves from was the economy itself and not some rapidly mutating virus that seems to stay two steps ahead of our response.

The impacts of the pandemic? No doubt. More than one million older workers have left the labor force since the recognized start of the pandemic in the United States in March of 2020. Fear of working with the public? A nest egg boosted by stock valuations? Lack of employment prospects? Probably a bit of all of the above, in my amateurish, but interested opinion as I work my way through my late fifties.

I have no intention of hanging it up at any point for any reason other than physical incapacity. Then again, I work for myself. I like my boss. He's strict, but he kind of shuts up when I make a mistake. If I still worked for others, would I be looking for a way out at this age? I'd be thinking about it.

Talk about mercenary behavior, and I mean that in a good way. (I have never looked down on mercenaries, btw. I will only raise my sword for God, country and corps but I do understand how one does go there.) Ford Motor (F) brings aboard Apple's lead engineer in developing that firms' automobile project. Doug Field has also served as a top engineer at Tesla (TSLA) in between doing two stints at the world's greatest of all-time consumer electronics (my opinion) company, or maybe just greatest company of all-time. I mean the company is worth about $2.6 trillion.

Let's face it. This is the kind of aggression that we have come to expect from Ford under the leadership of CEO Jim Farley. Farley has put this firm back on the map, despite the pandemic, and despite the shortages of semiconductor chips and parts that have been forced upon the entire industry thanks to said pandemic.

On that note, Apple announced this Tuesday that the firm will hold its next launch event next Tuesday, September 14th. The firm did not reveal what the launch entails, but industry experts are expecting an iPhone 13 that improves the camera, display, and battery life of the iPhone 12 launched last year at this time. There is also some expectation, perhaps with delays for an Apple Watch 7 that would involve a major redesign as well as more of a focus on healthcare related applications. I'll tell you this. One thing that having a nasty case of COVID in March/April of 2020 and a drawn out recovery left me with was having to take my blood pressure and heart rate four or five times a day. I have always prided myself on having never spent more than $25 on a watch (true story). That said, I would pay a lot for a watch that accurately keeps an eye on my vitals for me.

Only four sell-side analysts cover GameStop (GME) . Consensus is for a loss of $0.66 per share, but there really is no consensus. The range of expectations for the four runs from $-0.96 to $-0.38, so what we refer to as consensus is really an average. Revenues are expected to reach $1.12 billion. That number really is a consensus as all four are indeed very tightly wound around that number. The comps from a year ago, which really are not useful are for a loss of $0.45 per share on revs of $1.28 billion.

The numbers that matter more than actual financial performance are structural. There are roughly 72 million shares outstanding, with about 58 million shares in the float. The shares are 17% owned by management, 29% owned by funds, and the balance owned by you folks. Fund ownership has been stable for virtually all of 2021. As of mid-August more than 17% of the entire float was held in short positions. 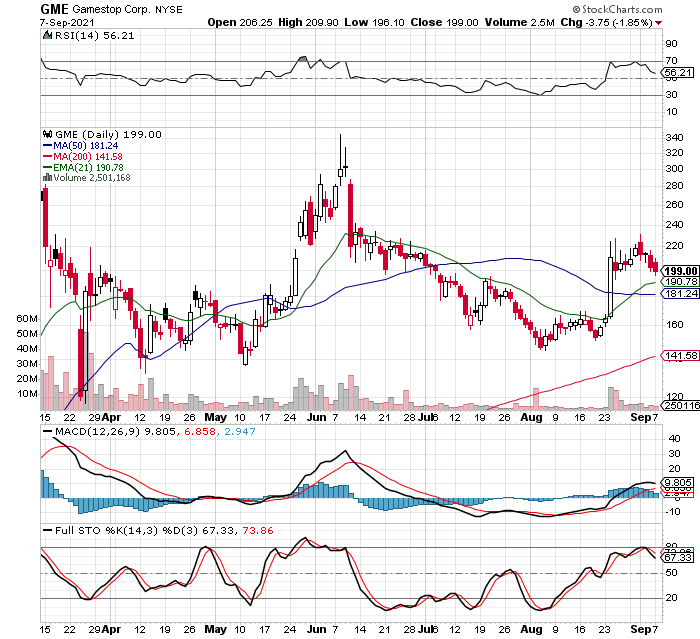 What's interesting here is simple. Will the 21 day EMA act as support for the shares as that line had acted as resistance nearly all summer long? GME has not reacted at all to a mini or swing traders' golden cross in late August. The daily MACD, RSI, and Full Stochastics Oscillator are all backing off of overbought levels as GME approaches earnings. Though, the company is not worthy of the valuation, personally if one plays these earnings, I would rather play (very speculatively) from the long side (short-term).

Simply put, I just will not short a stock once short interest rises above 10% of the float. Whether earnings are seen as good or bad, momentum is all that will matter for this name by tonight. I would rather play that game with fun/mad money from the long side. No target price. This is an overnight rental.

Get an email alert each time I write an article for Real Money. Click the "+Follow" next to my byline to this article.
TAGS: Earnings | Economic Data | Economy | Federal Reserve | Investing | Jobs | Markets | Stocks | Technical Analysis | Trading