I was 14 years old. Early in the morning, I sold newspapers in those days. I had gotten off from work early and was walking to school. Not quite light, not really dark. I saw the police officer a few seconds before he saw me. The man was visibly nervous. Uniform disheveled. Gun drawn. Up against a brick wall, peaking around the edge into a corner back yard. I tried not to startle him while also trying to be cognizant of whatever or whoever had terrified this poor guy. Then he saw me and put the gun right in my face. For what was probably only a second or two, but seemed like more, neither one of us moved. Then, he silently waved me out of the area, with his weapon. I looked around and walked away. I never saw the perp, and that was basically that. Never forgot the awkward feeling of being on the wrong side of a firearm for the first time. Really, really never forgot my parents' angry reaction when I got home from school that day and told them. Taught me something valuable early in life. Always be aware. Always move silently. Always know that in this world you really are all on your own.

I honestly enjoyed Morgan Stanley's Mike Wilson's rodeo reference in describing the financial market on Monday. While Wilson did a better job in illustrating the broader picture for you, this is close to the picture that I have been trying to paint. The difference possibly being that Wilson is urging readers to not try to time their outs in an effort to maximize performance.

Readers know that while I have taken already high cash levels even higher in the past week, I have increased exposure to gold, and tried to finesse a dividend book not reliant upon the Utilities. This while trying to invest the rest of my book normally. Almost as if I have been forced by market conditions to try to think outside the box, but still in some sentient way. We have always preached a disciplined approach to diversity. Never before has it been as important as it is right now to understand what as an investor it is that you are trying to accomplish. Create a plan for allocation of funds, and implement that plan. Write it down, Create different accounts with diverse mission statements if you must. Hiding inside of a barrel while also remaining on the field of play is kind of what I'm saying. Rely on someone else to do this for you at your own peril. Does that individual understand the need to maintain hedges, or at least constantly manipulate net basis. Will that individual really hurt if you do? If your children do? Your adviser is part of the environment. Adapt to and excel in the environment provided. Always aware. Independent.

Earnings are sloppy so far. Yes, double digit growth is nice. It's early but 10% earnings growth is less than investors have become accustomed to, and less that the 12% markets were looking for coming into earnings season. It gets worse from here, gang. While barring a catastrophe, revenue growth should be somewhat stable at a 5% to 6% year over year growth rate for 2019 in it's entirety. The current season will be the last with the easy earnings comparisons, now that the tax cuts are a year old. When corporations roll out their Q1, Q2, and Q3 data, with a little misfortune, we could see no earnings growth at all. Earnings recession? Been there, done that. Not at all beyond the imagination.

No sales growth in China. Weak demand from China. Impact from the U.S./China trade war. We've heard the drumbeat. We know where firms are placing the blame for under-performance in terms of profit, and margin. Should there be a resolution on trade between planet earth's two largest economies, equity markets will experience a nice pop, if only in relief. The truth is that the Chinese economy will require Herculean stimulus to slow the pace of it's slow down as that nation is simply less poor than it once was, and is no longer a demographics favorite in terms of providing a youthful, inexpensive labor force regardless of what comes of these talks, or of legal maters involving Huawei. For that matter, to some degree, the U.S. economy - and certainly the EU economy - have never truly proven able to survive without the benefit of consumption brought forward in a way that artificially improves conditions in the here and now to the obvious detriment of that unknown date when the can kicks back. When those cans do kick back, the hope is that it will be someone else's problem. Never mind that those someone else's happen to be our children and grandchildren.

The old Sarge in the old market would have loaded up on the shares of Nvidia (NVDA) amid Monday's warning. That was a doozy. Significant shortfalls in revenue and margin. I had sold most of what I had left in my long position last week above $157. Still hold an odd lot. You may recall that I had gotten myself run over in the wake of the firm's trip over the falls in a barrel last November. What now? I don't need to be there, so why be there? That's the sentiment, particularly after Intel (INTC) disappointed on the data center. I have more of an interest there, but at least that firm pays investors something decent (2.7%) just to stick around. There is also the expectation that those shares will react well to the if and when of the naming of permanent leadership.

Advanced Micro Devices (AMD) reports on Tuesday night. These shares, in dollar terms are cheap enough to survive a mistake, and cheap enough to manipulate post-earnings, which is really how positions must now be looked at and understood. Sort of similar to Intel in some ways, and also similar to Nvidia in others. One might expect AMD to get hit in the teeth. Then again, I think an awful lot of Lisa Su's abilities as an organizer, and her ability to anticipate markets. This may be a lot to ask of anyone, however. Over the past couple of months every revision to revenue expectations for this quarter has been negative. Every single one. Let's take a look.

What we have seen of late from a number of chip producers really might be interpreted as pre-recessionary, in not just terms of earnings, but if persistent, also in terms of economic growth. Remember, the economy runs on semiconductors. We're living in another era without them. We're not growing if nobody needs them. The street is looking for Q4 EPS of $0.08 on revenue of $1.44 billion from AMD after the closing bell on Tuesday. That revenue number if realized will print at -2.7% y/y. Not only that, $1.44 billion would be the lowest revenue number for the firm since Q2 2017, but also the worst performance in terms of revenue growth since Q1 2016.

There is some good news. Lisa Su has already told us that the negative impact from a lack of demand from crypto-currency miners should be "negligible". In terms of pricing, AMD is not out there on the high end with NVDA, nor, according to Stifel's Kevin Cassidy, are they as exposed to the cloud. Cassidy maintained both his "Buy" rating as well as his $34 price target on Monday.

AMD still needs the Chinese market, however at least historically, the firm's dependence upon Chinese markets as a revenue driver in percentage terms is far less than many other chip producers. I am honestly not crazy in love with the stock. There may be however, a certain value here not present in the competition. In addition, short interest has been on the rise. For those new to trading, while shares held in short positions are bets against a stock's performance, large or rising short interest in aggregate is often considered by traders as a bullish indicator. Why is that, you ask? I'll explain briefly. AMD runs with a float of 881 million shares. As of two weeks ago, 129 million shares of AMD were held in short positions, up from 114 million shares a month prior. Think about that... 14.6% of the float is basically a stamped buy ticket that will likely feel some pressure if the stock were to move higher. Hmm. The stock's average daily volume over the past 10 days is about 82.7 million shares traded. At that pace if every single share traded was purchased by a trader short the stock, it would take a day and a half to clear the short interest. 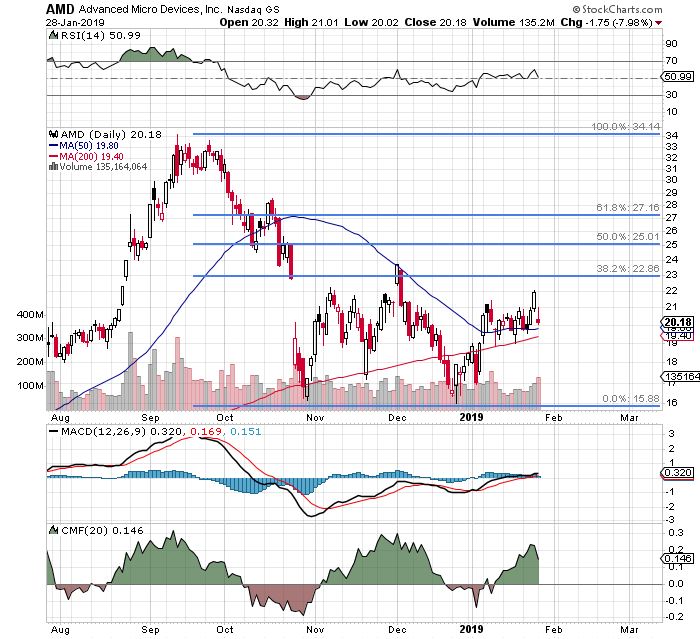 The truth is that these shares have repeatedly enjoyed $16 support, while running into trouble at $22. The 50 day SMA is getting a little too close to the 200 day SMA for comfort, despite Relative Strength and a daily MACD that don't offer much guidance. Money Flow has been strong of late, and volume has been higher on down days than on up days of late. The stock pays no dividend, meaning that investors can afford to be more patient. Basically, I don't want to own the shares here. I want to own them at confirmed support or on a break of resistance.

As for equity, I am willing to own a chunk at a 20% discount but still want to stick my toe in the water if this magical discount never materializes. I do not need immediate equity exposure. I am fine in waiting for my pitch, not forcing anything.

Notes: The trader in this example has created the possibility of benefiting form a potential post-earnings short squeeze, while selling $16 protection to other traders in greater size. If this entire strategy expires worthless, out traders net a credit of $2.09. If in April AMD had crashed, this trader will end up long 400 shares at a net basis of $15.48... if the trader chooses not to repurchase the puts.

Get an email alert each time I write an article for Real Money. Click the "+Follow" next to my byline to this article.
TAGS: Earnings | Economic Data | Investing | Markets | Options | Stocks | Technical Analysis | Trading | Semiconductors & Semiconductor Equipment | Market Recon