Cramer was positive on the name, telling the caller, "Skyworks is fabulous, I'd buy it."

We looked at the charts of SWKS on June 3, when we wrote that "SWKS may or may not pull back for a slightly better buying point so traders should do some buying at current levels. Risk a close below $115 for now. $140 and then the $200 area are our price targets."
Prices continued to rally from June 3rd so not waiting for a pullback was the way to go.
Let's take a fresh look at the charts.
In this daily bar chart of SWKS, below, we can see that prices have nearly doubled from its March low. SWKS is above the rising 50-day moving average line and above the rising 200-day moving average line. A bullish golden cross signal is also visible. Prices anticipated to gap higher on the opening Tuesday, so it will look like the recent dip in price is over. The On-Balance-Volume (OBV) line continues to point upwards from its March low and only shows some minor softness. The Moving Average Convergence Divergence (MACD) oscillator has been bullish since the end of April and shows a minor jiggle recently.

In this weekly bar chart of SWKS, below, we can see the price of the last three years. The big picture could be a large base pattern like an "irregular" cup and handle pattern. Prices declined sharply in February/March and recovered very quickly to make new highs. The OBV line shows a pattern of higher lows from late 2018 and is now close to making a new high for the move up. The MACD oscillator is still bullish and rising.

In this long-term weekly bar chart of SWKS, below, we can see the past 10 years of price activity. SWKS has broken out on the upside from a five year consolidation pattern. This is a major breakout and can result in a major rally of at least the height of the pattern ($50) added to the breakout level ($120) or at least $170.

In this Point and Figure chart of SWKS, below, we used weekly close only price data to construct the chart. A potential longer-term price target of $248 is being indicated. 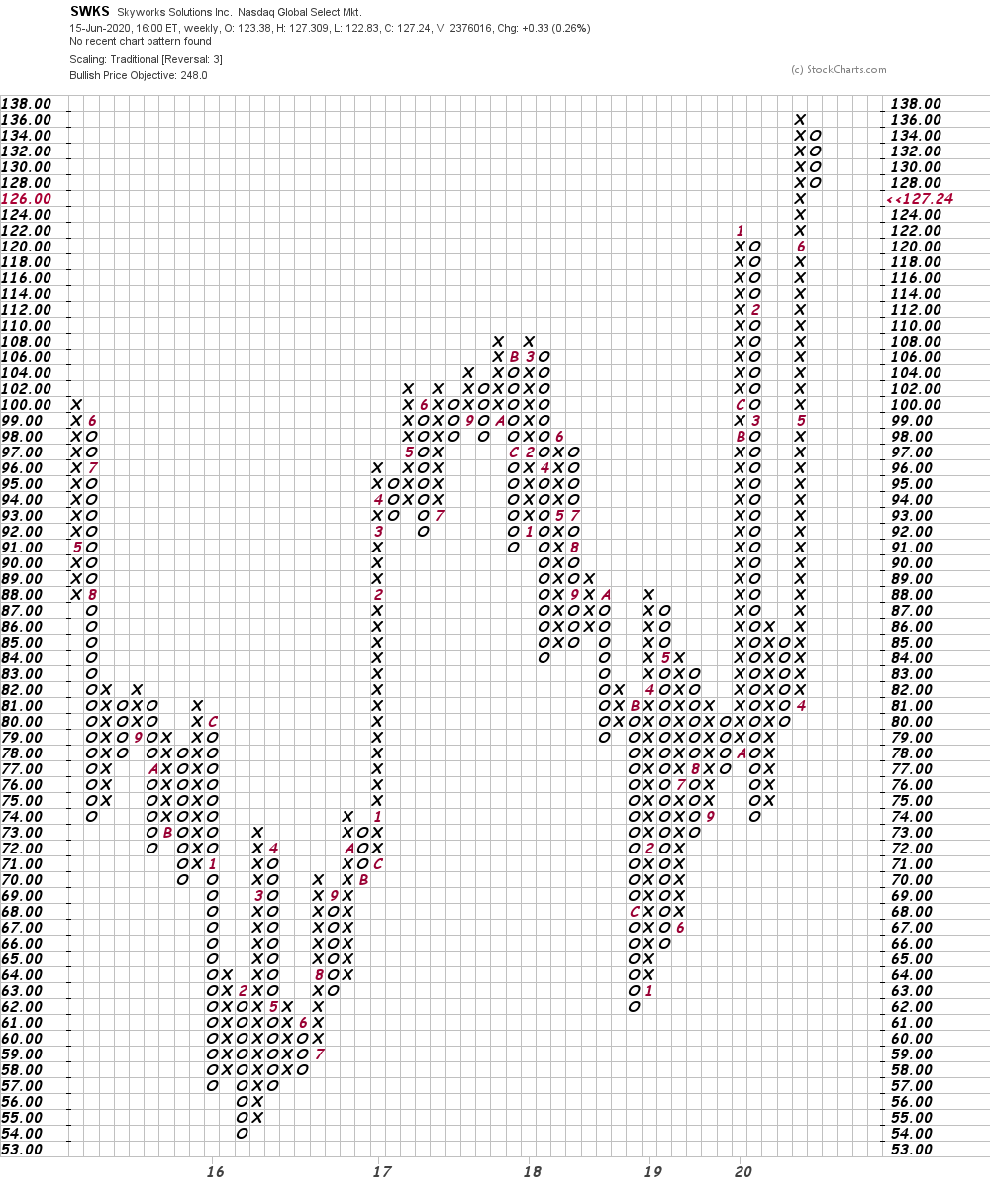 Bottom line strategy: SWKS has broken out of a major five-year consolidation pattern. The $170 area is our first target followed by $200 and $248. Continue to hold longs recommended on June 3. Risk a close below $120 now.
Get an email alert each time I write an article for Real Money. Click the "+Follow" next to my byline to this article.
TAGS: Investing | Technical Analysis | Technology | Mad Money