The first lesson for traders and investors would be to understand just how thin the ice we skate upon almost always is. Especially at a time like this, with economies around the world mired in elevated levels of consumer level inflation while activity stalls. US markets are not immune to geopolitical risk. Though assets here such as Treasury debt security and the fiat currency itself can act alongside gold as havens for capital fleeing risk during times of increased stress, domestic markets do come under pressure when something comes out of left field. That's what happened on Tuesday afternoon.

We know that Russian forces had launched one of their broadest missile attacks yet on Ukrainian infrastructure, knocking out power across large stretches of the war-torn nation and even causing power outages in neighboring Moldova. Suddenly equity markets lurched lower as did Treasury yields as the US dollar spiked versus the euro. Reports spread of two farm workers dead as "Russian-made" missiles had struck inside the Polish border. The border village of Przewodow, a rural area, had suddenly become part of Russia's war on Ukraine.

Again... Two Polish citizens inside of Poland had become victims of a war that their nation was not militarily engaged in. Polish armed forces immediately went to a higher level of alert. Time to invoke Article 5? Or at least Article 4? Poland is a NATO power and an attack against any NATO nation is an attack on all of NATO requiring an allied response.

For hours there was no confirmation of just what happened. Russia's defense ministry denied responsibility. G-7 and NATO leaders already in Bali for the G-20 summit called an emergency meeting in order to discuss the events. In the US equity markets largely recovered off of the day's low without making new highs. The US dollar index returned to where it had come from, and perhaps most telling of all... defense and aerospace stocks that had spiked earlier, came well off of those highs.

The results of a preliminary investigation that was discussed by those leaders, suggests that the explosion that killed those farm workers may have possibly been from a missile or missiles fired by Ukrainian air defenses against the broad Russian attack mentioned earlier.

US President Joe Biden commented... "It is unlikely in the lines of the trajectory that it was fired from Russia but we'll see." Polish President Andrzej Duda stated... "There is no conclusive evidence about who fired the rocket." According to the Financial Times, Duda referred to the strike as a "one-off incident."

So, was October the turning point for domestic inflation? It certainly seems possible. On Tuesday morning, October PPI printed well below consensus view as had October CPI last Thursday. October Producer/Supplier prices gained 8% on a year over year basis versus expectations for an increase of 8.3%, and down from 8.4% growth in September. The series peaked at growth of 11.7% back in March and remained above 11% from that point right through the results for June. Headline PPI on that annual basis has been rapidly cooling for four consecutive months now.

Core October PPI printed at growth of 6.7% y/y, well below the September print of 7.1% as well as the 7.2% that economists were looking for. On a month over month basis, headline October PPI hit the tape at growth of 0.2% versus expectations for +0.4%, while Core m/m PPI printed flat (0.0%) from September versus projections for an increase of 0.3%.

So was October the turning point? This data suggests that the actual turning point came months ago, but October data (for both CPI and PPI) was what forced several Fed officials to finally admit that progress had been made, and a slowing of their aggressive strategy of tightening monetary policy was likely called for.

For Example... (This Is Great)

Philadelphia Fed Pres. Patrick Harker spoke on Tuesday after the PPI data hit the tape. Harker said, "In the upcoming months, in light of the cumulative tightening we have achieved, I expect we will slow the pace of our rate hikes as we approach a sufficiently restrictive stance." Harker added later... "It will probably be appropriate soon to move a slower pace of increases."

Flashback to October 20th. Our speaker is again, Philadelphia's Patrick Harker. The tone is starkly different... "We are going to keep raising rates for a while. Given our frankly disappointing lack of progress on curtailing inflation, I expect we will be well above 4% by the end of the year." That's some heavy duty back-tracking in less than a month's time. By the way, the Fed Funds Rate currently stands at 3.75% to 4% with one policy meeting to go (December 14th) in 2022. Philadelphia did not vote in 2022, but will vote in 2023.

In the end, our rally continued on Tuesday as the positive looking PPI outweighed the geopolitical risk once it started to look like there had been no Russian attack, even if accidental, upon a NATO power. The S&P 500 closed at 3,991, up 0.87% for the session, but one point (not one percentage point, but one point) below where that index closed on Friday. The Nasdaq Composite was stronger, gaining 1.45% on Tuesday and closing at 11,358, which is 35 points (0.3%) above Friday's closing level.

Nine of the 11 S&P sector-select SPDR ETFs ended the day in the green, led by Communication Services (XLC) . However, six of these ETFs gained between 1.05% and 1.49% on Tuesday, so leadership was well spread. The real leadership came from the semiconductors on the news that Warren Buffett's Berkshire Hathaway (BRK.A) , (BRK.B) had taken a stake in Taiwan Semiconductor (TSM) .

Personally, regarding the semis... I gave my Nvidia (NVDA) long position a haircut going into Wednesday earnings. I was up 27% very quickly, and thought it the prudent thing to do. I am not flat. I also initiated a small short position in TSM after the name stabilized on the Buffett news. Not taking some big bold shot here. Just figure that if there is some profit taking this evening in NVDA that TSM will also get hit. It may work, it may not. I still have longs in Advanced Micro Devices (AMD) and Marvell Technology (MRVL) if so. AMD has been fantastic.

Perhaps the most telling signal that has guided traders throughout this rally has been trading volume. We all know that our "tradeable bottom" of October 13th was confirmed by upside volume on October 21st and reconfirmed by volume on November 10th. Well, that has continued. On Tuesday, winners beat losers by more than 3 to 1 at the NYSE and by more than 2 to 1 at the Nasdaq as advancing volume took a 74.3% share of composite NYSE-listed trade and a 72.5% share of composite Nasdaq-listed trade. On top of that NYSE-listed trading volume increased 10% as Nasdaq-listed trading volume increased 12.3% on a day over day basis. Monday, of course, was a down day. 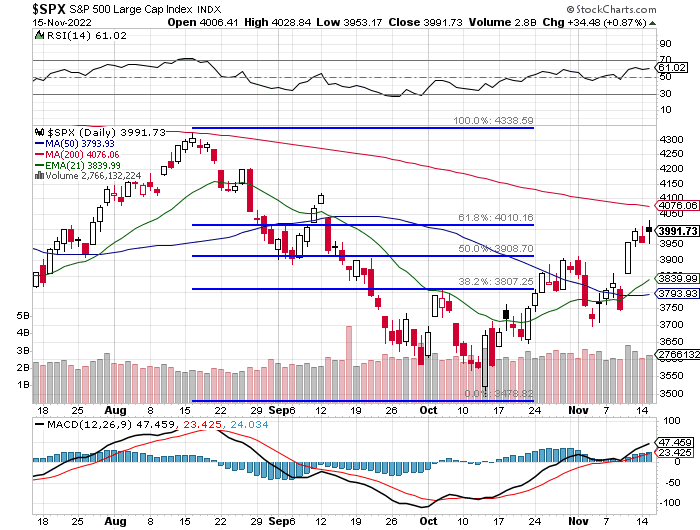 Readers should note that to this point, while the higher trading volume on "up" days is quite obvious relative to the lower trading volume on "down" days, that the S&P 500 has had trouble surpassing the 61.8% Fibonacci retracement level of its August into October selloff. This is the first line of resistance faced by this index on the road to its 200 day SMA, which is a line that some see as destiny. 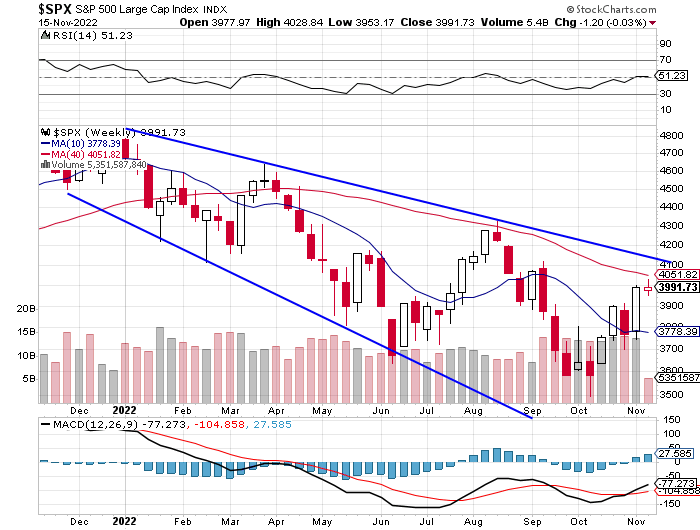 On the weekly chart, readers will see that the S&P 500 remains within its descending broadening wedge, which is often a bullish reversal breakout pattern. However, one can see the index already struggling as it approaches its 40 week simple moving average, which comes ahead of reaching the upper trendline of our wedge.

In short, make no mistake, the S&P 500 is currently strong from a technical perspective. That said, there is traffic ahead. Should the S&P 500 tackle that Fibonacci level (4,010), its 40 week SMA (4,051), its 200 day SMA (4,076), and the upper trendline here (4,110-ish), it will have sawed through a lot of wood and almost all of Wall Street would be on board as portfolio managers up and down Wall will have been forced to commit to increased levels of exposure.

I still believe that the US goes into recession late Q1 2023 into early Q2 2023. That will, of course, hurt equity markets. What I am trying to say is that, all of this traffic to our front right now has almost as much of a chance to cause a slingshot effect for US equities as it does to actually resist the current rally. The next six weeks are going to be active. Perhaps very active.

First we deal with October Retail Sales and Industrial Production. Carry on.

Get an email alert each time I write an article for Real Money. Click the "+Follow" next to my byline to this article.
TAGS: Economic Data | Economy | Federal Reserve | Interest Rates | Investing | Markets | Stocks | Technical Analysis | Trading | Europe | Russia