By BRUCE KAMICH May 31, 2019 | 02:30 PM EDT
Stocks quotes in this article: SIX
In the 'Lightning Round' of Mad Money Thursday night, Jim Cramer was bullish on Six Flags Entertainment Corp. ( SIX) . Let's check out the charts and indicators before buying a season ticket.
In this daily bar chart of SIX, below, we can see some subtle clues that prices could be undergoing a transition from bearish to bullish. From June to March, prices are in a downtrend, with lower lows and lower highs. So far, SIX has not made a lower low since late March.
Prices have drifted lower this month, but the On-Balance-Volume (OBV) line has been steady, which suggests investors may be buying the weakness instead of becoming more aggressive sellers.
The Moving Average Convergence Divergence (MACD) oscillator is poised to cross the zero line or turn higher - it all depends on the price action from here.

In this weekly bar chart of SIX, below, we have some other clues to point out. Prices are below the declining 40-week moving average line, but prices have not made a new low since March.
The weekly OBV line shows a bullish pattern from August, 2017, which suggests there may have been some significant accumulation of shares of SIX.
The weekly MACD oscillator is below the zero line, but it has crossed to the upside for a cover shorts buy signal on this longer time frame.

In this point and figure chart of SIX, below, we can see a downside price target of $48 being projected.
Yes, it is down, but it is not a new low for the move down. 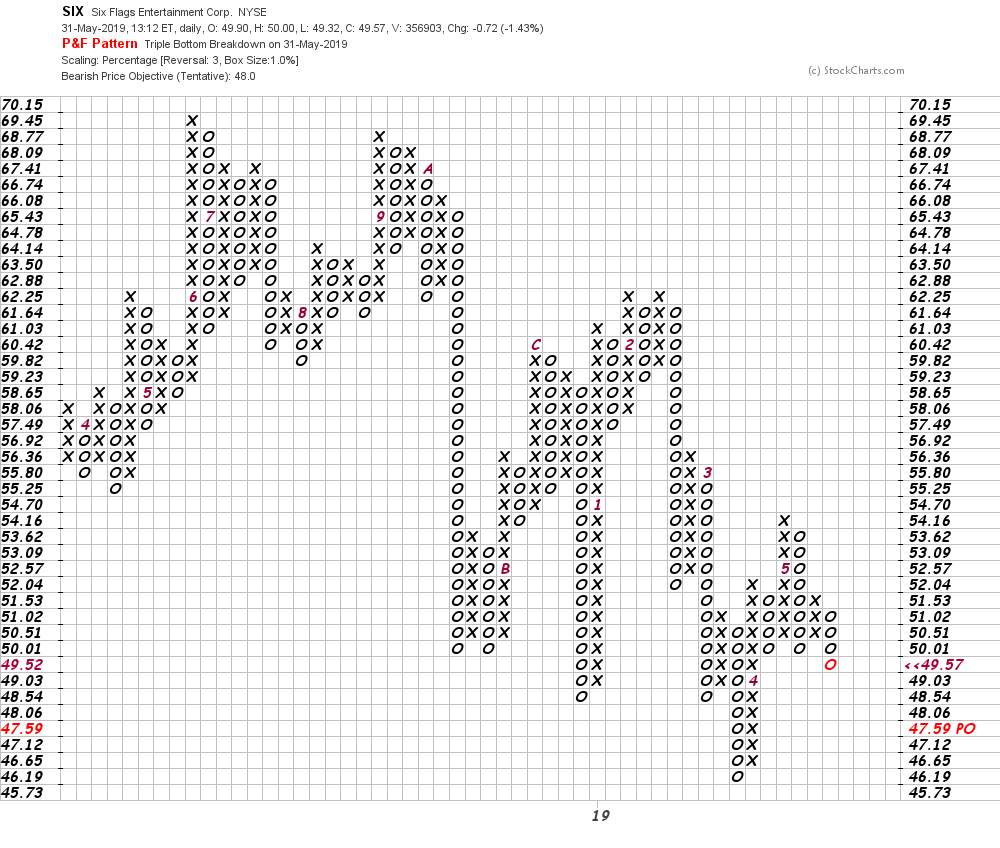 Bottom line strategy: I like to buy stocks on strength because it tells me I am trading in the right direction. SIX is not showing me strength, but it is showing me that it wants to bottom. Put SIX on your shopping list for future purchase.
Get an email alert each time I write an article for Real Money. Click the "+Follow" next to my byline to this article.
TAGS: Economy | Investing | Stocks | Technical Analysis | Trading | Market Recon | Consumer Discretionary