Silver and gold. Really, the two... although often lumped together as "precious metals" are quite dissimilar. Despite what Yukon Cornelius told you as a child. Both have been used on and off as a form of money throughout human history. Store of value? Check. Divisible? Check. Medium of exchange? At times, but not broadly. Bitcoin would have to answer the same questions in the same way.

Both are scarce enough to be valuable, while common enough to find broad use across the human experience for a number of other reasons. Those reasons vary. Gold is considered beautiful, as well as ornamental. Silver is far more useful as an industrial commodity. What they both have in common is an inverse relationship to the U.S. dollar. Think endless deficit spending will damage the U.S. dollar? Think that what looks like "Modern Monetary Theory" now stares us in the face? Well, the value of a U.S. dollar long since left backed by nothing but the confidence of those using the fiat, could ultimately face a time of intense challenge.

While "Modern Monetary Theory" espouses the idea that the state can, between fusion of monetary and fiscal policy borrow and spend whatever is necessary or even desirable with little negative consequence. One thing potentially not understood by those embracing this (in my opinion) incorrect policy direction, is that they can not through either policy nor legislation force the people to believe in the currency. This is why investors embrace gold, silver, bitcoin, land, fine art, fancy wine, etc. Now bitcoin is different from the others. An excellent way to move wealth out of a currency in danger of losing confidence, which is good, it does not hurt if you drop it on your foot, which is bad. Meaning that if the loss of the electrical grid or loss of internet communications ever becomes reality, your bitcoin will be worthless. Gone. Your gold or silver will still be gold or silver.

Last Friday, many hours prior to the open, we discussed the short-squeeze swarm going after silver in that morning's Market Recon. I took advantage myself... through the ETF. Entry level position. I was going to pad the position through grabbing some front month futures, but I got to writing this piece, so we'll see where they are after publication. It would be unwise to front-run one's own article, not to mention unethical. We also discussed the crowded short U.S. dollar trade on Friday, as well as the implications for just about everything if the markets figure out how to gun the dollar.

Silver, either though the actual physical, through the futures markets, the iShares Silver Trust ETF (SLV) which is backed by physical silver, or through the miners themselves had shown some pop on Thursday, more on Friday, and now even more on Sunday night into Monday morning. You had your chance to catch some of this. Some of you were probably already there. BlackRock (BLK) reported that almost a cool $1 billion flowed into the SLV ETF on Friday alone. Bullion broker Apmex has also had to disclose a one to three day delay in the processing of transactions in physical silver. Others are probably asking if it's too late to jump on board. So, is it? Let's think.

So, Is This Really a Squeeze?

Not necessarily. On the one hand (Forgive me, I do have a background as a Wall Street economist.) remember the ETF is backed by physical silver (to a degree), meaning that when new capital flows in, there must in correlation be an increase in the physical gold held in the fund's vaults. So, a squeeze of sorts can be forced, but I don't think at all to the degree of what we saw in a few stocks last week. There are two many ways to trade precious metals, there are too many places to trade precious metals, and these markets trade globally, so this would be some heavy lifting.

What investors do have is the gold/silver ratio which is the value of one ounce of physical gold over one ounce of physical silver. This number traditionally hovers around 60 times. The last sale that I see while writing this piece for physical gold is $1870, and for silver is about $30. That's 62.3 times. Assuming that gold is currently valued correctly, the implied price for silver would be about $31.16 an ounce. If silver was just catching up, and $30 is the right price. then gold would have to come in to the $1800 level. 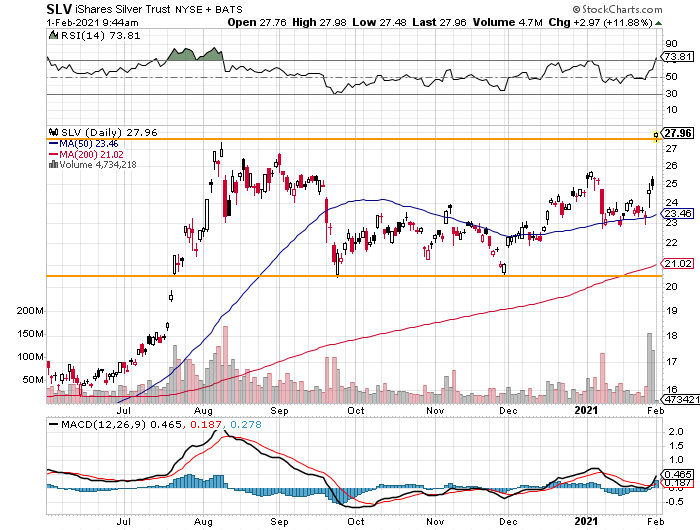 Readers will note that the ETF SLV gaped higher on Monday morning, breaking above the highs of last August. Should this level be held, that would act as a pivot point, and provide potential for a target price of roughly $34. On the other hand, there is now a huge gap created that likely fills at some point.

A number of silver members have been heard or read of in this morning's financial news. Among them would be First Majestic Silver (AG) , trading at about 43 times next year's earnings with roughly 20% of the float held in short positions. Another would be a real cheap (as in the last sale) one that retail investors may latch on to. McEwen Mining  (MUX) , last sale $1.45, trades at 196 times forward looking earnings, with $16.5% of the float held in short positions. I don't recommend anything but this one in my opinion... could catch the fancy of the swarm.

Get an email alert each time I write an article for Real Money. Click the "+Follow" next to my byline to this article.
TAGS: Bitcoin | Commodities | Gold | Investing | Markets | Technical Analysis | Trading | Metals & Mining