Jobs Day. For the first time, if it's good, nobody will care. Thursday... felt kind of awful. Yes, the broader U.S. equity indices gave up between 3% and 4% apiece after "finishing strong", but it is more than that. I can take the volatility. In fact, I can make volatility work for me. I would rather not. I would rather not have to watch my country suffer, and the bond market is telling us that there is going to be some of that.

For equities, the reality is that once investors started to truly comprehend the coming negative economic impacts of this coronavirus, that the broader large cap indices went through a severe seven day losing streak that bled into this week's wild swings. Trading volume for the "Super Wednesday" rally was simply dwarfed by the aggressive selling on both Tuesday and Thursday, and that volume had no silver lining. For New York Stock Exchange listed names on Thursday, declining volume beat advancing volume by more than 10 to one. All 11 sectors were taken out to the woodshed, even the bond proxies (Utilities & REITs), even as investors poured into the U.S. 10 Year note. I felt ill as the 10 year note gave up just 0.9% on Thursday afternoon. I slept on my office floor this past evening, only cat-napping through the overnight, watching as that yield slid even lower. Much lower.

Zero Three Thirty... Friday morning. My, the time flies when your having fun. Not. The U.S. 10 year gives up 0.75%. My fabled 3 month/10 year spread is still positive. The three month T-Bill now pays 0.6%. What is so terrifying in the not short, but the immediate term, now is the inversion of the one month T-bill versus the three month T-bill. That spread now runs at -25 basis points, or versus the six month (-32 bps), or versus the two year note (-33 bps). My friends, the bond market is sick, very sick. The implication being made by debt markets is that we, as a nation are going to feel like we are going through a recession whether we do by definition or not. We have had long stretches that felt like that over the past 10 or 12 years. This time, though, the shock will be caused by illness, or the fear of illness. There has not been a simultaneous reduction to the velocity of transaction driven by weakness in both supply and demand like the one now anticipated by the bond market in my recent memory.

A supply shock to goods and services.

A demand shock for goods and services while there's a shock to supply.

A shock to labor markets created by that demand shock while there is an ongoing shock to supply.

Have a nice weekend.

Instinct nearly calls upon this investor to get out there and buy a basket of airline stocks. Nearly. Airline stocks are like poison right now. The Dow Jones U.S. Airlines Index gave up 8.56% on Thursday as the International Air Transport Association projected a potential reduction of between $63 billion and $113 billion in terms of global passenger driven revenue. For domestic airline stocks, a two week selloff has amounted really to more than three years now down the drain... 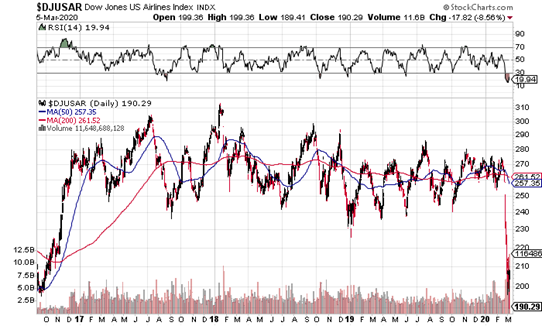 This shock to demand for travel extends to oil markets. Even as OPEC does what they can to stem production, with or without an already agreed to 1 million barrel per day reduction, is being seen by some as disappointing. Russia has still not agreed to cut by the 500K barrels per day that their OPEC "allies" are looking for either.

In addition, the shock to demand extends to all industries within transport. Marine Transportation, the rails, even trucking... no matter how many cases of canned soup you try to buy on Amazon (AMZN) .

Berkshire Hathaway (BRK.A) , (BRK.B) Chairman and CEO Warren Buffett once said "Be fearful when others are greedy, and greedy when others are fearful." In the long run, Warren Buffet's quote proves quite prescient. Who can argue with Buffett's success? That said, it has been a long time since Buffett has been among our ranks. He does have room for error, and he was probably just a bit smarter than we are when he was where we are. Just Thursday alone, United Airlines (UAL) backed up 13.35% after announcing that schedules were being reduced and staff were being offered unpaid leave. Elsewhere, Southwest Airlines  (LUV) reduced the firm's outlook for the first quarter.

From Berkshire Hathaway's 13-F for Q4 2019, so we do not know if these numbers are current, Berkshire controls 10% of American Airlines (AAL) , 11% of Delta Airlines (DAL) , 10% of Southwest Airlines, and 8% of the already mentioned United Airlines. If these positions stand where they were, Berkshire would be down billions of dollars on those positions from where they were in mid-February. As far as I can tell, Berkshire is still up from net basis (even if not much) on most of these. Would love to know if Buffett is adding here, or keeping his powder dry. Would simply love to know. My bet (I do not know the man, we have only spoken a couple of times and it was because I was answering the phone for somebody else)? He's not sitting on his hands and if he is sitting on his hands, the rest of us should probably be terrified.

Thank goodness for my bond portfolio.

Why didn't I put more into my bond portfolio?

Why didn't I buy more Teledoc Health and Veeva Systems.

I probably (definitely) should have chased Zoom Video (ZM) after swinging (and missing overnight into Thursday).

Heads up... Whole lot of Fed speakers today. Esther George (sort of a perma-hawk) just before the closing bell.

- Highest exposure to gold in years.

Get an email alert each time I write an article for Real Money. Click the "+Follow" next to my byline to this article.
TAGS: Economy | Investing | Markets | Stocks | Technical Analysis | Trading | Treasury Bonds | Airlines | Transportation | Warren Buffett | Coronavirus