Given the news over the past few weeks, the news has to be seen as complex. First, Monday morning starts out with good news. AstraZeneca (AZN) announced trial data from its U.S. study for the firm's Covid-19 vaccine (that had already been authorized for use in many nations) indicates a 79% efficacy rate for the prevention of symptomatic Covid, as well as 100% effectiveness in preventing death or severe disease.

The firm says that it has 13 million doses in the U.S. ready to roll, and is expected to file with the FDA in coming weeks for "Emergency Use Authorization", and if granted would become the fourth vaccine in the U.S. arsenal that already includes Messenger RNA vaccines manufactured by Moderna (MRNA) and a joint Pfizer (PFE) /BioNTech (BNTX) venture, as well as the adenovirus-based vaccine manufactured and distributed by Johnson & Johnson (JNJ) . The AZN candidate is also adenovirus-based derived from a chimpanzee coronavirus deemed very similar to the SARS-CoV-2 virus that causes Covid.

There is belief that as the U.S. is way ahead of the rest of the developed world in vaccination rates and that such campaigns in many less developed areas are yet to begin, that the U.S. could use this AstraZeneca vaccine to support global distribution rather than rollout broadly for domestic use.

There are questions. The U.S. study, or at least what we know about it involved 32,449 individuals, and found the vaccine to be well-tolerated. The group was studied for what are known as "thrombotic events" or more plainly... blood clots in the brain. The board monitoring the study found no increased risk for such events among the 21,583 individuals who did actually receive at least one dose of this vaccine.

As we know, across Europe where the AstraZeneca vaccine has been a driver of the continent's vaccination program, a number of countries halted use of the AZN vaccine despite vaccination rates across the EU of just 2% to 3%, and in some countries new infection rates that are once again on the rise. There were at least 30 cases of CVST or Cerebral Venous Sinus Thrombosis across Europe in recently vaccinated individuals who tended to be younger females.

On the one hand, there are studies that show no statistically significant increase in blood clots for those vaccinated than from those not vaccinated. On the other hand two separate groups of medical researchers, one in Germany and one in Norway as reported in the Wall Street Journal last Friday, said that they had identified a mechanism that could lead this vaccine to cause these blood clots in rare instances. One slice of positivity would be that even if these researchers are correct, that the condition would be treatable.

Even as parts of France and Italy went back into social and economic lockdown last week. Germany, France, and Italy resumed the use of this vaccine, while the Scandinavian nations of Norway, Sweden, and Denmark seem reluctant to do so. 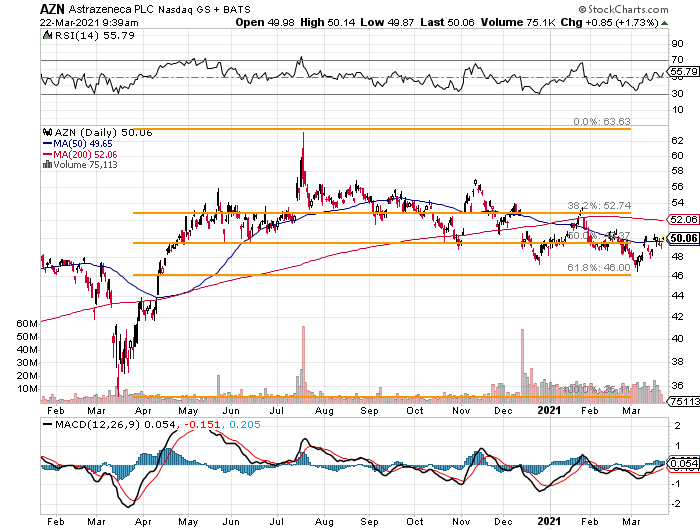 Readers will easily see that AZN has been in a state of gradual price erosion since spoiling last summer. Interesting the $46 level also happens to be a near perfect 61.8% Fibonacci retracement of the stock's move from the lows of March 2020 through that summer spike, and that level worked to precision for those seeking support earlier this month.

Would I buy this name right now? No. That's because I already have a pharmaceutical in my inventory that really does not perform all that well, but pays a nice dividend. That would be Pfizer. Over the past six months, PFE has gained a rather paltry 4%, but that stock does pay 4.4%. AZN pays a nice 3.9%, but the stock is down 9% over those same six months.

The money, I think, and this is just an opinion, to be made in this space is in the biotechs that worked on and (seemingly) perfected Messenger RNA technology. That's Moderna and that's BioNTech. This may be a stretch, but it's just what I am thinking but Messenger RNA technology is not just how we defeat Covid tomorrow, but how we defeat all coronaviruses the day after that, and maybe one day... disease. Period. Pfizer and AstraZeneca are fine for a dividend book. The biotechs that craft this until now experimental technology, despite incredibly volatile in the day to day pricing, are where I think I want to invest. That said, it's not like I am selling my Pfizer.

P.S. - If you really want to buy AZN, I think you get another crack at $46. This battle at the 50-day simple moving average is short-term crucial.

Get an email alert each time I write an article for Real Money. Click the "+Follow" next to my byline to this article.
TAGS: Drug Approvals | Investing | Markets | Stocks | Technical Analysis | Trading | Biotechnology | Pharmaceuticals | Coronavirus