Streaming giant Netflix (NFLX) is reporting their Q4 numbers Thursday after the close of trading. Prices have been in a steep decline since the middle of November so let's tune into the charts and indicators to see if the programming is for a bounce or for further losses.

In this daily bar chart of NFLX, below, we can see that prices rallied from May to the middle of November but then turned quickly to the downside. Prices broke below the 50-day moving average line and its slope turned negative. NFLX continued lower and broke below the slower-to-react 200-day moving average line in early January. The 200-day line is now flat.
The On-Balance-Volume (OBV) line topped out in October/November and weakened. A declining OBV line tells us that sellers are more aggressive with heavier volume being traded on days when NFLX closes lower. The Moving Average Convergence Divergence (MACD) oscillator is bearish.

We are not encouraged with this weekly Japanese candlestick chart of NFLX, below, as prices broke below the 40-week moving average line with a large red candle (bearish). The weekly OBV line is in a decline and the MACD oscillator is nearly down to the zero line.

In this daily Point and Figure chart of NFLX, below, we can see that the software is projecting a downside price target in the $396 area. Ouch. 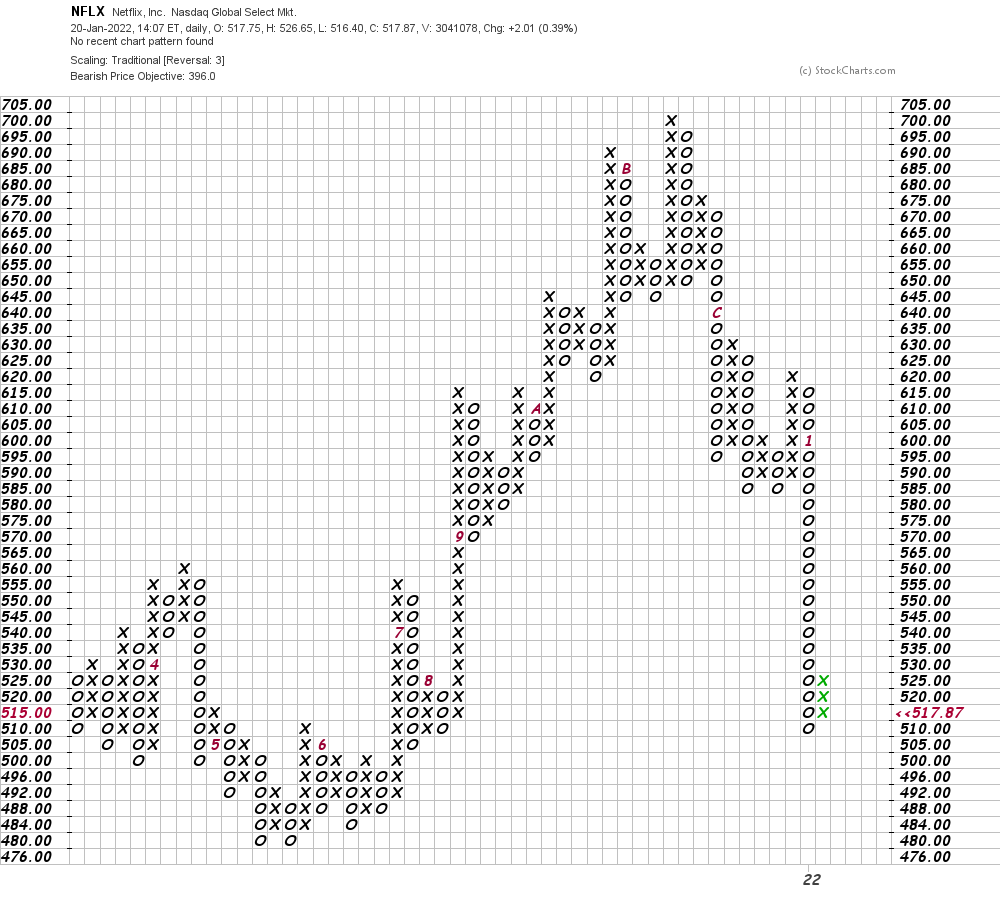 Bottom line strategy: NFLX has made a big decline and is oversold using tools like the stochastic indicator, but there has been no slowing in the pace of the decline - no bullish divergence from the 12-day momentum indicator. I have no special knowledge of what the numbers are going to be tonight but I am finding no technical reasons to buy the stock. Avoid.
Get an email alert each time I write an article for Real Money. Click the "+Follow" next to my byline to this article.
TAGS: Stocks | Technical Analysis | Trading | Movies | Earnings Preview | Investing