What a difference a day makes. On Tuesday morning, Home Depot (HD) reported a fabulous quarter tempered by guidance interpreted by Wall Street as mediocre. HD sold-off hard (-8.85) in response. Lowe's (LOW) sold-off 3.64% in sympathy. On Wednesday morning, Lowe's Companies released the firm's fourth quarter financial results. Like their rival, the performance was spectacular. Like their rival, at least some of the guidance was not quite as robust as it might have been. Earnings projections were quite good though. Maybe this is why. The "number 2" chain in the business seems to be making headway (taking share) from "number 1." LOW was trading up 4% prior to the opening bell, while HD was up almost 1% in sympathy.

Lowe's posted GAAP EPS of $1.78, easily beating consensus view, on revenue of $21.34B. The sales number was good enough for annual growth of 5.1%, and also managed to beat Wall Street. The all-important comparable sales data shows year over year growth of 5%, but +35.2% growth on a two year basis. U.S. Comp sales of 5.1% were in line with the company's broader performance. However, Pro customers sales popped 23%. Quite impressive. Gross margin increased to 32.93% of sales from 31.78% a year ago, while operating income increased from 7.5% of sales for this period last year to 8.67%.

Lowe's repurchased a rough 16M shares for about $4B over the three month reporting period, bringing full year repurchases to $13.1B, or about $1.1B more than expected. The firm also paid $551M in dividends for the period. As part of the firm's forward guidance, Lowe's projected $12B in share repurchases for FY 2022, and recently left the quarterly dividend at $0.80, currently yielding 1.44%. On Tuesday, Home Depot increased it's quarterly dividend to $1.90, yielding 2.19%.

I'm not going to lie to you. I'm not crazy about the balance sheet. I am not saying that Lowe's can not pay their bills. Not even coming close to that. I am thinking maybe they could buy back less stock, but hey, I am old-fashioned. A lot of traders in 2022 are just starting to realize that firms even have income statements and balance sheets.

The firm's net cash position is down significantly from a year ago to slightly more than $1.4B from slightly less than $5.2B. Some of that (+$1.4B) was inventory building which makes sense. Not all of it. Current assets dropped to $20.06B from $22.33B, while Current liabilities increased from $18.73B to $19.69B as accounts payable grew. (see inventory growth). Still, the current ratio of 1.01 barely passes the Sarge test. It's this >< close. To make matters worse, total liabilities less equity of $49.46B actually outweigh total assets - which was not the case a year ago - of $44.64B.

Apparently adding long-term debt of almost $3.2B over the course of a year can swing one's balance sheet in a way that a lot of fundamental investors might not like all that much. Fact is that for fiscal 2021, Lowe's bought back more than $13B worth of common stock up from just under $5B the year prior. All the while net cash from operating activities dropped from $11.049B to $10.113B, and the firm repaid $2.118B worth of debt for the year, down from $5.618B,

I know. Nobody's asking, however... The firm appears to have positive cash flow, but runs for a couple of quarters now with a negative tangible book value. My suggestion? Borrow less, buy back fewer shares. 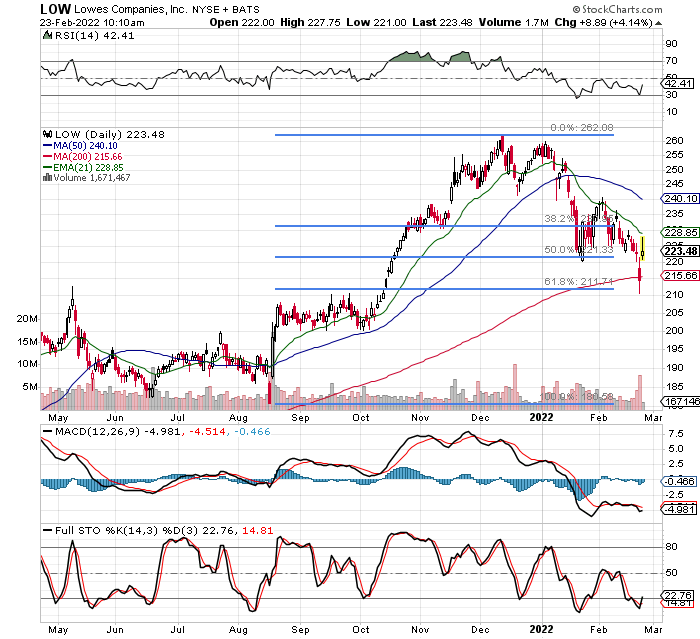 The stock is up 4%, and that is very nice. The shares rebounded sharply off of a 61.8% Fibonacci retracement of its August through December rally. As it has rebounded, a number of indicators appear to be coming out of technically oversold conditions. While the shares have passed their first test at the 200 day SMA, it is difficult to say that this level will not be tested again, in this market environment and with mortgage rates that will impact spending on home repair an uncertainty.

I can say that after looking at the fundamentals, I will not be buying LOW for myself, and at 18 times forward looking earnings, the stock may not be inexpensive.

Get an email alert each time I write an article for Real Money. Click the "+Follow" next to my byline to this article.
TAGS: Earnings | Investing | Stocks | Technical Analysis | Trading | Household Products