Another winner. To be more precise, another "work from home", or "work from anywhere" winner. DocuSign (DOCU) reported the firm's third quarter financial results on Thursday evening. The results are fantastic. The growth, or shall we say the "accelerating growth", is quite impressive to say the least. Yes, this was one of the names I gave you early in the pandemic as a likely winner. That was easy. Obviously, the need to sign documents remotely was going to explode as employees scattered. The firm does more than just e-signatures too, from contract management to remote notary services in states that allow it.

That said, I have now been long out of the stock after shaving my position each time a new target price had been overrun. The question now becomes... "Should I get back in?" Maybe I should be satisfied that I did have a nice trade. For those who have never played the name, is it too late now? Let's dig in.

For the period reported, DocuSign posted adjusted EPS of $0.22, well above the consensus view that was in between a dime and 15 cents. Revenues landed at $382.92 million, beating expectations and good for year over year growth of 53.5%. By the way, this was the third quarter of accelerating year over year growth after growth had appeared to have stabilized prior to the pandemic just below the 40%-ish level. It goes well beyond the headline numbers. Subscription revenue screamed 54% higher, Professional services a mere 43%. Billings roared in at $440 million for the quarter, up 63%,and just obliterating expectations.

Basically, DocuSign made better than good contact on every pitch they saw. About the only place that the firm came in flat was adjusted gross margin where they "merely" met expectations of 79%. Cash from operations of $57.4 million, produced free cash flow of $38.1 million, which left the firm with a net cash position of $675.6 million. Not too shabby at all.

For the current quarter (Q4), DocuSign is taking revenue guidance up to $404 million to $408 million, from a consensus (17 sell-side analysts) of roughly $389 million. The firm now guides subscription revenue to rise to $384 million to $388 million, and billings to land in between $512 million and $522 million. For the full year, the firm now sees total revenues at $1.426 billion to $1.43 billion, which is above the $1.39 billion that Wall Street had in mind. Full year subscriptions are seen rising to $1.355 billion to $1.359 billion, and full year billings to $1.7 billion to $1.71 billion. Most interestingly, the firm guides adjusted gross margin toward the 78% to 80% range that it always seems to be in. Same as it ever was.

The sell-side has been very active this morning in reaction to these earnings and this guidance. I see at least seven so far. Of those, six are rated at five stars by Tip Ranks, including such rock stars as Dan Ives at Wedbush, Walter Pritchard at Citigroup, and Alex Zukin at RBC Capital. All six were positive in their commentary. All reiterated "buy" ratings or their firm's equivalent. Most increased price targets. Of these six, there are six "buys", with an average target price of $288, including a high of $325 (Zukin), and a low of $270 (Ives). 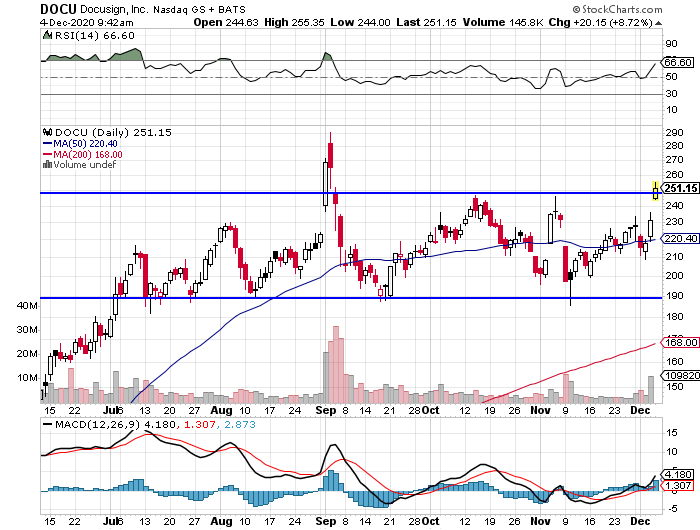 Outside of the odd spike that occurred just ahead of Q2 earnings in early September, this stock had settled into something of a basing period of consolidation. Resistance throughout this period has been staunch at $246. Obviously, after indeed running into some interference at that spot overnight, the shares have kicked that door open during the regular session. Holding above $246, which is now the pivot is key. We go into the weekend with a close above that level, and technically... $295 becomes very possible. If I am long the shares (I am not), I would be moving my panic point up to $220 (the 50 day SMA) at this point.

I am thinking about writing the $245 puts expiring this afternoon, while they are still trading above a buck, just an FYI, but now I have to wait until publication because I thought about it out loud. We'll see.

Get an email alert each time I write an article for Real Money. Click the "+Follow" next to my byline to this article.
TAGS: Earnings | Investing | Stocks | Technical Analysis | Trading | Commercial & Professional Services | Consumer Services