I'll never forget Christmas morning 1973. I was still a child. I had asked for a football for Christmas that year, and Santa Claus came through in the clutch that year. A Wilson football with a fake OJ Simpson autograph stamped on the exterior. I could not wait to get outside and show the guys. I was now king. I was the guy with the football. Long before anything negative had become of OJ Simpson's reputation, and just nine days prior to that Christmas, OJ had torched my NY Jets in the snow at Shea Stadium for 200 yards, rushing to end that 14 game season with more than 2,000 yards. In 1973, OJ had become the best there ever was.

At least for the next couple of years, I was the necessary guy. Street football was what kids did after school in the 1970's. The game did not start until I showed up, and the game ended when I went home. You laugh? The economy was a bit tougher on common folk back in the day, and owning one's own football was indeed living high on the hog. I can still hear the older kids as late afternoon melted into dusk. "What are you going to do? Take you're football and go home?"

Those who read me often know that this is exactly what I did. A long time supporter of Intel (INTC) , this last time I held the shares, the position did not perform. I had to manage my net basis, and once I was back in the green, I got out. I took my football and went home. This morning, that sale now appears to have been premature.

For the firm's third quarter, Intel reported adjusted EPS of $1.42, soundly beating expectations. Though revenue generation of $19.2 billion comes to growth of just 0.2% (a fourth consecutive quarter of less than impressive performance), that print also handily beat what the street had been looking for. What I want to know is, should I be in this name at this point? I know that's what you want to know as well. Let's explore the guts of this release.

Intel's largest business segment is the Client Computing Group. This group makes processors for personal computers and laptops. The CCG segment contributed $9.71 billion (or 50.6%) to the whole. This beat expectations but still showed a 5% decline from the same quarter last year.

The part of the firm that is showing impressive growth is the Data Center Group. This business generated $6.38 billion in sales, +4% y/y, and soundly beating consensus. If one is in the name, or considering taking that step, this is the key number.

Some smaller parts of the firm are growing even faster, such as the Internet of Things (+9%), Mobileye (+20%) and Memory (+19%), but in aggregate, these three groups contributed less than $2.6 billion in revenue to the headline number so at least for now, they are less significant.

For the quarter, there were quite a few key metrics that investors will notice contracted badly from Q3 2018. Operating income printed at $6.4 billion, -12%, Net income hit the tape at $6 billion, that's down 6%, and gross margin declined from 64.5% to 58.9%. Through this past quarter, the firm generated about $10.7 billion in cash from operations. paid $1.4 billion in dividends and spent $4.5 billion repurchasing 92 million shares. On Thursday evening, the firm announced a $20 billion increase to be made to that buyback authorization.

The forward looking guidance is quite positive. The firm guides Q4 revenue toward $19.2 billion versus consensus of $18.8 billion, and adjusted EPS toward $1.24 versus expectations of $1.21. Intel also guided the full year numbers above consensus in the same release. On this guidance, CEO Bob Swan stated, "Our priorities are accelerating growth, improving our execution and deploying capital for attractive returns. We now expect to deliver a fourth record year in a row."

I don't dislike Intel. I think the worm has clearly turned in a positive direction for the semis as a group. Believers will point to the aggressive positioning laid out by Taiwan Semiconductor (TSM) last week. Naysayers will point toward Texas Instruments (TXN) . I think investors have to be selective in choosing areas of the larger industry where they want to be. The data center, regardless of recent cloud type equity performance is a driver of growth. My favorite name there remains Nvidia (NVDA) , and I also like what Lisa Su is doing at Advanced Micro Devices (AMD) . I remain long both of those names. As to memory, Micron (MU) is the on again, off again industry darling, but Western Digital (WDC) pays me a dividend. Not exactly oranges to oranges, but $2 a year sure beats zero. 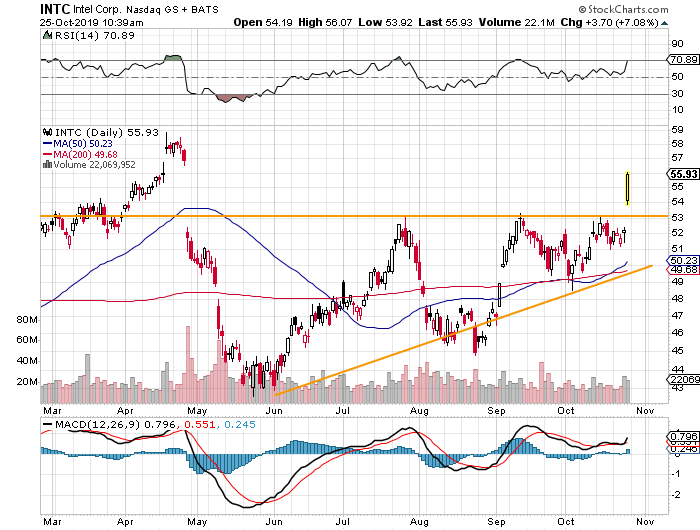 The chart is positive. This morning we have a breakout of an ascending triangle that formed in the wake of the late April meltdown. We now see the gap created by that selloff finally filling after a six month period of higher lows.

Do I want to buy equity here? I have enough exposure to the semis as whole right now. I think I would rather sell January $52.50 puts for a rough $1.30, and pocket the premium. If the shares sell off by then, and I hang on to the puts, a net basis of $51.20 doesn't sound nearly as risky.

Get an email alert each time I write an article for Real Money. Click the "+Follow" next to my byline to this article.
TAGS: Earnings | Investing | Options | Stocks | Technical Analysis | Trading | Semiconductors & Semiconductor Equipment | Technology